How a Mississippi court case could pave the way for new abortion bans across the U.S.

Ohio identified by the Center for Reproductive Rights as one of 24 states 'hostile' to abortion rights. 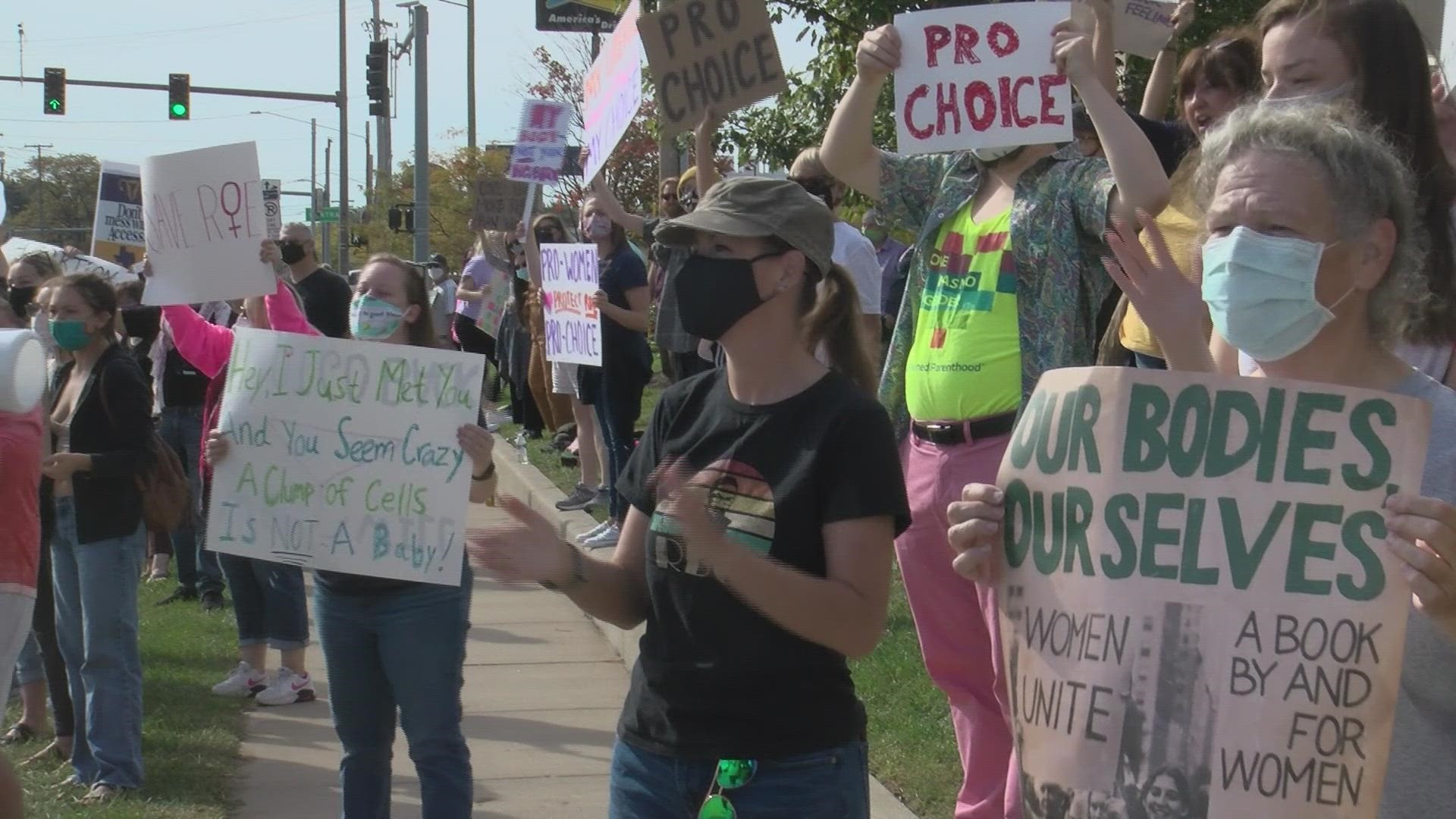 COLUMBUS, Ohio — WASHINGTON — A six-week abortion ban in Texas enacted in September forced those seeking abortion services in the Lone Star State to look across state lines for care.

But the timing couldn’t have been worse for Texans living near the state’s eastern border.

The law took effect as neighboring Louisiana was reeling from the destruction of Hurricane Ida, which shut down two of the state’s three abortion clinics for several days. The growing number of patients seeking help had to wait until the clinics could restore power, or travel hundreds of miles to other providers.

But that was just a preview of the obstacles that would emerge if the Supreme Court upholds a Mississippi law that bans most abortions after 15 weeks. For example, Louisiana’s own law would shift to the same 15-week ban, advocates say.

The landmark abortion case that will be heard by the nation’s top court on Dec. 1, Dobbs v. Jackson Women’s Health Organization, could spur a cascade of legal changes across two dozen states if justices back the restrictive Mississippi law — and potentially dismantle the landmark 1973 ruling affirming the right to an abortion.

Access would be most severely restricted in a long band of neighboring states stretching across the South and Midwest, according to the Center for Reproductive Rights, which is challenging the law.

The process would be far more time-consuming for those who have the means to travel elsewhere. And states with fewer restrictions would be bombarded with patients seeking out a shrinking number of providers.

The organization has identified 24 states as “hostile” to abortion rights, meaning those states could immediately or very quickly prohibit abortion. They have laws that were on hold but would automatically go into effect or could be enforced again, or lawmakers there are likely to attempt new bans.

Late last month, Ashtabula Republican state Sen. Sandra O’Brien introduced Senate Bill 123, one of these “trigger” bills that would allow the state to ban abortion with a change in the U.S. Constitution or the overturning of the U.S. Supreme Court decision in Roe v. Wade.

Asked if the bill would protect the person asking for an abortion in the case of rape or incest, O’Brien said no.

“No it does not, because she could always take contraception,” O’Brien said.

A dozen states — including Louisiana, Tennessee, Missouri and Idaho — have “trigger laws” that would go into effect banning abortions if Roe v. Wade is overturned, according to the Guttmacher Institute, an organization focused on reproductive health and rights.

Michigan, Wisconsin, Arizona and five others still have abortion bans that pre-date Roe v. Wade on the books, which would become enforceable again if the precedent is overturned. That list shrunk by one earlier this year, when New Mexico repealed its pre-Roe ban.

On the opposite end of the spectrum are 15 states that have laws protecting the right to abortion, a tally that includes Maine, Maryland, Nevada and Oregon, according to Guttmacher.

In Kansas, a state Supreme Court decision in 2019 found the right to bodily autonomy embedded in the state Constitution guaranteed access to abortion. But state voters could change that next year, when a constitutional amendment will be on the ballot to reverse that ruling.

While the Mississippi case will be heard by a Supreme Court with a new conservative majority following the addition of Justice Amy Coney Barrett, it’s not clear that it will lead to a complete reversal of Roe.

But a narrower ruling favoring the Mississippi law also would spur restrictions. A 2019 Georgia law that would outlaw most abortions once fetal cardiac activity is detected — about six weeks into a pregnancy and before many women know they are pregnant — has been on hold, pending the outcome of the Mississippi case.

Louisiana also has a pending law that’s nearly an exact replica of Mississippi’s 15-week ban, and it is explicitly tied to the outcome of the Mississippi case, said Michelle Erenberg, executive director of Lift Louisiana, which advocates for abortion access.

“We’ve grown accustomed to this sort of ping-ponging back and forth, and waiting on judicial review and judicial rulings as these laws have made their way through state legislatures and through the courts,” Erenberg said. “But it is really difficult to feel that you can fully prepare for this inevitability.”

The Supreme Court’s recent rulings suggest it may support the Mississippi law, which was blocked by a lower federal court.

It will be the first time the court will rule on the constitutionality of a pre-viability abortion ban since Roe. That decision forbid states from banning abortions before the fetus can survive outside the womb, or about 24 weeks.

The court’s justices announced in May that they would take up the Mississippi case. Since that announcement, they also voted in a 5-4 decision against preventing the more-strict Texas law from taking effect.

That Texas law bans abortions once cardiac activity can be detected, or typically around six weeks after the patient’s most recent menstrual cycle. It also allows private citizens to file lawsuits against abortion providers and anyone who aids an abortion.

That law was briefly paused by a federal district court, but then reinstated by an appeals court.

Since the Ida-related closures, Louisiana’s abortion providers have seen a substantial rise in the number of Texans seeking abortion services.

Amid the legal chaos and uncertainty, Erenberg said the phone calls from potential patients are “increasingly panicked.”

The battle at the U.S. Supreme Court is playing out during a year when state legislatures have approved a record number of abortion restrictions, according to tracking data compiled by Guttmacher. As of October, 19 states have enacted 106 restrictions, including 12 abortion bans.

Four states, including Idaho, adopted bans on abortion at six weeks of pregnancy. A Florida lawmaker already has filed a bill for the session beginning in January based on the Texas law, replicating its six-week ban and the ability for citizens to sue people who provide or enable abortions.

Residents across most of those states already are living in “a post-Roe reality,” Tinsley Peterson said, describing the myriad of limitations that have been enacted on abortion access across the South. (Florida is the only state in ARC-Southeast’s region that has passed any abortion protections.)

When the Texas law went into effect, ARC-Southeast worked with another abortion fund to help support people who may be seeking services across the group’s region.

But “people weren’t really calling us,” Tinsley Peterson said. Texans seeking help in other states faced a number of other challenges in states where abortion was technically available, such as waiting periods in Tennessee and Alabama that require multiple appointments or a lengthy trip to get to less-restricted clinics in Georgia or Florida.

“That’s not a decision that anyone should be forced to make: Are they going to drive or fly hundreds of miles for a simple, safe health care procedure?” Tinsley Peterson said.

One of the few states that has acted to back abortion rights is New Mexico, where earlier this year state legislators repealed the state’s pre-Roe abortion ban, so it cannot be enforced if the Supreme Court overturns the Roe case.

That effort was driven by “the understanding that a federal protection is not the end-all be-all,” said Charlene Bencomo, executive director of Bold Futures New Mexico, one of the groups that worked to repeal that dormant ban.

But while the state has a more-favorable legal landscape, “actual access is pretty scarce” across the large, rural state with only a handful of providers, Bencomo said.

That’s become even more apparent since the Texas law took effect, which has resulted in New Mexico providers becoming inundated with calls, the same prospect predicted for other abortion-rights states if the Mississippi law holds.

Providers in New Mexico have described an “overwhelming sense of fear and panic,” including among New Mexico residents unsure if the Texas law would mean changes in their state, she added.

One consequence will be longer wait times for patients and longer work days for providers. Some people may need to travel to neighboring Colorado to obtain abortions, she said.

For states and residents seeking abortion services, legal clarity on what comes next also will be a matter of waiting.

The Mississippi case will be heard by the Supreme Court in a few weeks, but a decision isn’t likely until next year, potentially as late as the end of the court’s session in June.

Until then, abortion providers and activists who support abortion rights will be left to watch the court weigh arguments on whether a state law banning abortions much earlier than the Roe standard can be constitutional.