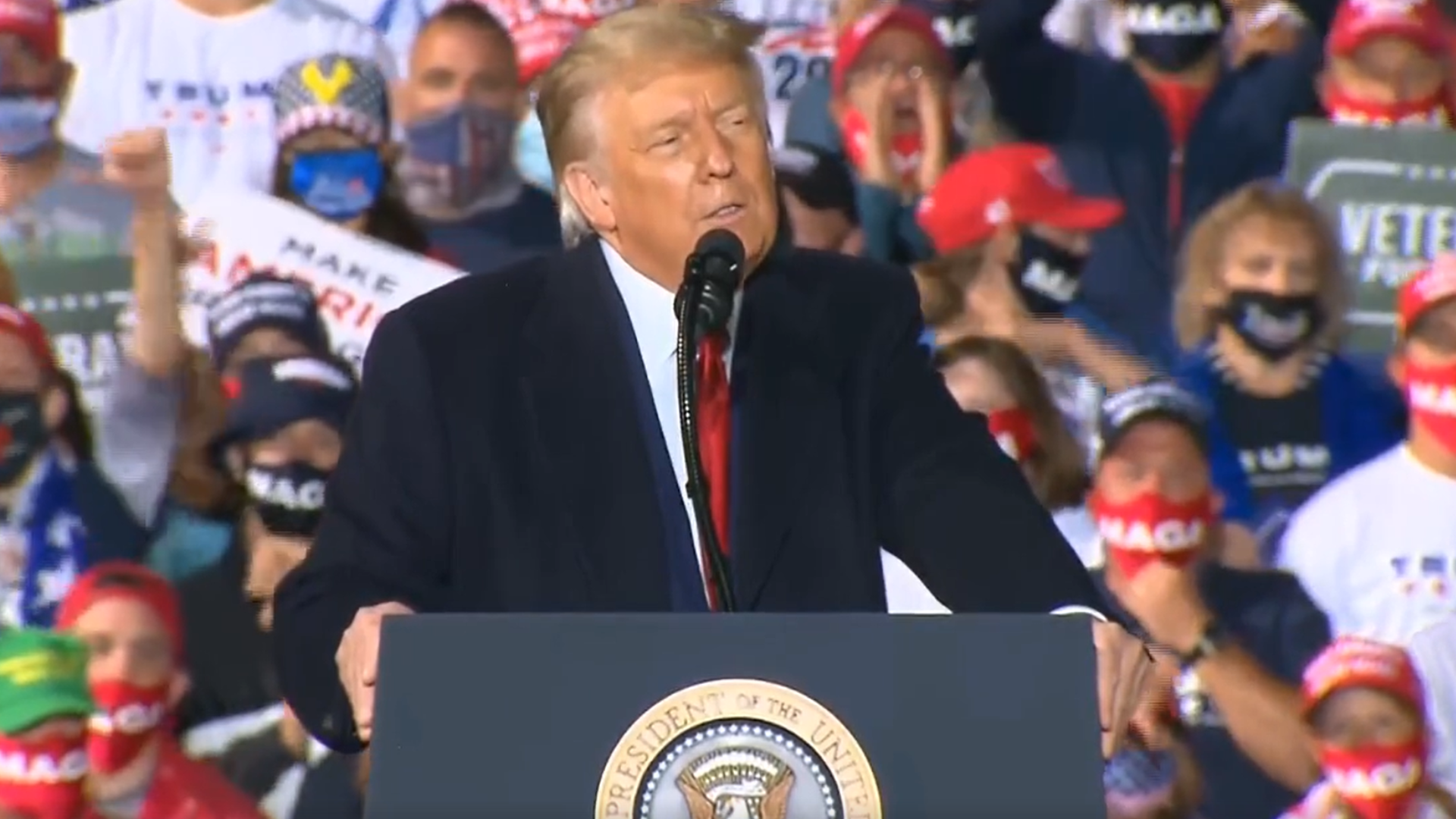 TOLEDO, Ohio — President Donald J. Trump visited northwest Ohio yet again on Monday, just 43 days before the nation decides who the next leader of the nation will be.

The president last was in our area on Aug. 6, as he toured the Whirlpool plant in Clyde and made an address at the plant. He also visited the Huntington Center in January.

President Donald Trump began his rally at the airport at 7:56 p.m., nearly an hour after he was to begin speaking.

During the speech, the president said he will announce a female nominee to fill the seat left by the death of Justice Ruth Bader Ginsburg. The airport crowd chants "FILL THAT SEAT" as some wave signs bearing the slogan.

He also referenced the possibility of an attempt to impeach him anew, saying he's the only president who would ever get impeached for attempting to fill a Supreme Court seat.

Trump also called the upcoming election "the most important in the history of the nation," saying that it is the difference between destroying the suburbs and creating a safe and stable future for America's children.

He revisited familiar campaign themes so far this season: attacks on Joe Biden as "Sleepy Joe," calling for getting rid of Democratic House Speaker Nancy Pelosi, deriding the "fake news media," and lauding his administration for gains he claims on establishing Space Force, building 330 miles of southern border wall (saying 10 miles a week are being built), claiming gains in manufacturing and serving the middle class by giving tax cuts.

He also said the Democrats would end the Constitutional Second Amendment protections saying "I am the only thing standing between you and chaos."

He also claimed that justices that Biden, a devout Catholic, would appoint would remove the words Under God from the Pledge of Allegiance.

"They want to take God out of everything. Just like they want to knock down statues of George Washington and Thomas Jefferson," Trump said.

Trump said he was told Biden's campaign "isn't even trying for Ohio," saying that he himself loves Ohio loves him. He said Ohio had the best year in its history last year, and pledged that Ohio would have an even brighter future if he's elected on Nov. 3.

The president also said he's proud "that we've brought back the Big Ten and the Ohio State Buckeyes," saying the team better have a good season after all that. He said that he put pressure on the league commissioner and also provided for expanded coronavirus testing for the teams involved.

The president started to address the COVID-19 pandemic about a half hour into his speech, saying that vaccines are right on the horizon, and deriding Biden's response to the H1N1 swine flu.

"These (vaccines) will be done in record time ...," Trump said. "On Nov. 3, Ohio will decide whether we end the pandemic and return to record prosperity or whether we allow Sleepy Joe Biden and his group of incompetents to dely the vaccine and shut down the country. "

Trump also repeated his claims that Biden aims to dismantle police departments, an assertion that Biden has repeatedly denied.

Credit: WTOL
President Trump calls up Little Miami High School football players Brady Williams and Jarad Bentley, who were suspended and reinstated after carrying a thin blue line flag on the field on Sept. 11 to show support for police officers.

"I will always stand with the men and women of law enforcement," Trump said. "We have to give them back their dignity and we have to let them do their jobs."

Trump then referenced Little Miami High school football players Brady Williams and Jarad Bentley, who were suspended for displaying a thin blue line flag supporting police officers, calling them up to the podium.

"They're going to go to Hollywood and become movie actors," Trump said, wishing them both good luck.

Among his other achievements, Trump ticked off ending the ISIS caliphate, peace agreements in the Middle East, keeping the Lima tank plant open, keeping the American auto industry alive, and being nominated for the Nobel Peace Prize twice and getting no recognition from the press for it.

"If it were up to Sleepy Joe, bin Laden and Sulemani would be alive today, ISIS would be on a rampage, Iran would control the Middle East and China would be the dominant power anywhere in the world," Trump said.

Biden will be able to answer Trump's charges during the first presidential debate on Sept. 29 in Cleveland. The president wrapped up his speech at 9:08 p.m., to the strains of the Village People's "YMCA."

President Trump was to start speaking at Grand Air at 7 p.m. At 7:03 p.m., he just wrapped up his rally at Dayton International Airport, addressing a crowd of about 1,200 there.

Supporters arriving at Monday's campaign rally for President Trump in Swanton went through mandatory temperature checks. Masks were optional and a volunteer was handing out disposal masks while another offered sanitizer.

As President Trump continues to speak in the Dayton area ahead of the Swanton rally, WTOL brings you live team coverage of supporters, detractors, businesses, safety measures and the impact of the election on Ohio. 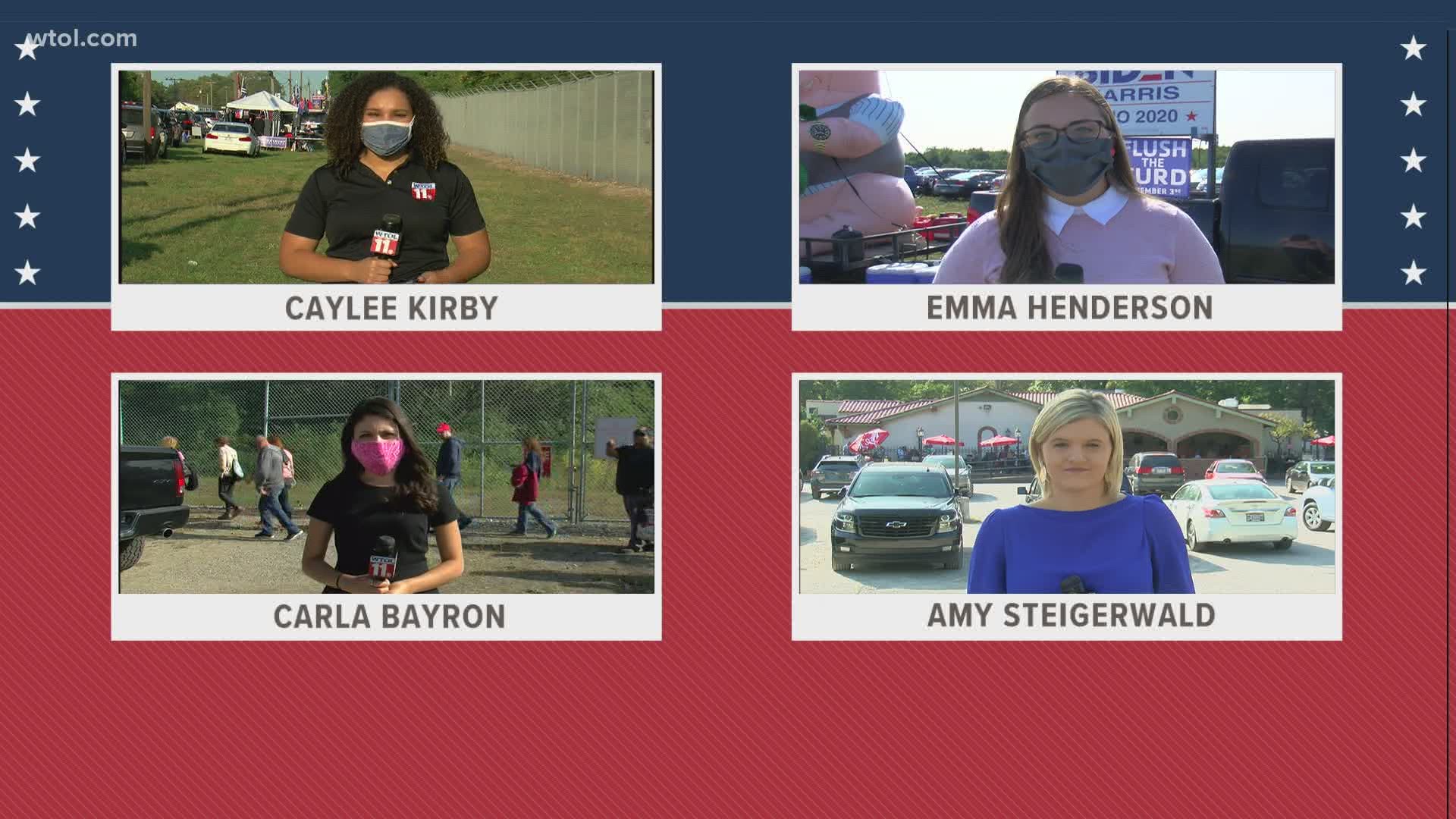 President Trump has landed in Dayton and is to give a rally at the Dayton International Airport, focusing on the American worker. Following this rally, Air Force One will head to Swanton.

Gov. Mike DeWine met with the president on Air Force One, according to Lt. Gov. Jon Husted.

Governor ⁦@GovMikeDeWine⁩ on Air Force One talking with ⁦@realDonaldTrump⁩ about Ohio and the election pic.twitter.com/NbPCgZwNgI

President Trump has departed Joint Base Andrews and is heading to his first Ohio stop of the day, at the Dayton International Airport. The day's schedule had him originally set to depart JBA at 3:20 p.m., so as of now he's about an hour behind.

Heading to the Great State of OHIO, will be there soon! #MAGA pic.twitter.com/PawzHeeYbO

Doors are open at the Grand Aire facility at Eugene F. Kranz Toledo Express Airport, where President Donald J. Trump will lead a rally at 7 p.m.

Hundreds of people have waited to get in for hours, lining Airport Highway since early this morning.

At this point, President Trump is supposed to be en route to Dayton International Airport for a rally there before coming to Swanton.

Some confusion ensued around the area where protesters were staged, with the group initially being told they needed to move from the public space. The land is owned by the Port Authority, according to the sheriff's department, but it was said at the site that it was being rented out to the Trump campaign for the day and that protesters would have to move. There also was a complaint that protesters were too close to the street.

After about 15 minutes of consultation, a sheriff's deputy said the group could stay in the public easement as long as they didn't encroach onto the road. WTOL 11's Emma Henderson seeks clarification as the incident unfolds:

Spotted in the crowd outside the airport are Patrick and Elizabeth Kriner. Patrick is the executive treasurer of the Lucas County Republican Party.

"Before the pandemic, obviously we had the best unemployment for a very very long time; economy was booming, things were going the way they were supposed to, and then the pandemic hit," Patrick Kriner said. "We think he did an awesome job getting the country up to speed on the pandemic."

Brisk business is being done at Loma Linda ahead of the Trump rally. It's one of the closest eateries to the Great American Comeback Event. Loma Linda, like many restaurants in the area, have faced many challenges because of the COVID-19 pandemic and the owner of Loma Linda was hoping that the rally today would help to drive business. When we stopped by, there were many people in red and white Trump gear getting a bite to eat.

Karen Hritz and Kelly Reed were two such diners.
“I like the way Trump puts America first, I feel like that hasn’t happened in a long time,” Karen said, with Kelly agreeing.

Credit: WTOL
Karen Hritz, left, and Kelly Reed get a bite to eat at Loma Linda before the Trump rally at Grand Aire at Toledo Express. “I like the way Trump puts America first, I feel like that hasn’t happened in a long time," Karen said and Kelly agrees.

Protesters are out to show their opposition to President Donald Trump as he comes into Eugene F. Kranz Toledo Express Airport. Among the demonstrators are the AFL-CIO and members of the International Brotherhood of Electrical Workers (IBEW). Democratic presidential nominee Joe Biden is featuring a Toledo IBEW member, Larry Tscherne, in his campaign.

One of the hundreds waiting for a chance to see the president has come a long way to be in Ohio today.

Gail Kaye, 69, originally from Honolulu, has been traveling across the country in an RV with her husband since March while following Trump around.

When asked what keeps her up at night, Gail says, “Stop killing babies. Abortions. One every minute. I want my tax dollars to stop paying for abortions.”

She said she approves of the job the president is doing with the economy, saying once the virus is gone, the economy will “be super good again,” and that he is bringing peace to the Middle East.

“He is just helping everyone. He is the best president in history.”

She said that once he is out of office, students will learn about how great of a president he was in history books.

Credit: WTOL
Gail Kaye, 69, has been traveling across the country in an RV with her husband since March while following Trump around. She is originally from Honolulu, Hawaii.

Supporters have tents up all along the fence line at the airport. In one spot off Airport Highway, flags are flying and signs are posted as a throng of supporters host a tailgate event of sorts before the president's expected arrival at 6:50 p.m. ~ Renata Clo

Lucas County Democrats say that security has moved its original positions for their planned protest. Their protest starts at 1 p.m., and various groups plan to join them throughout the day. They are now planning to meet off Airport Highway, near the Charlie's Restaurant there.

#Protest update: security has moved the original positions for today's protest. This may change through the day. We...

The president's schedule for the day has been released. Here's his Ohio schedule:

Volunteers have already started gathering at Eugene F. Kranz Toledo Express Airport, at the Grand Aire facility. Tents are up and volunteers are getting their instructions. ~ Michelle Backus