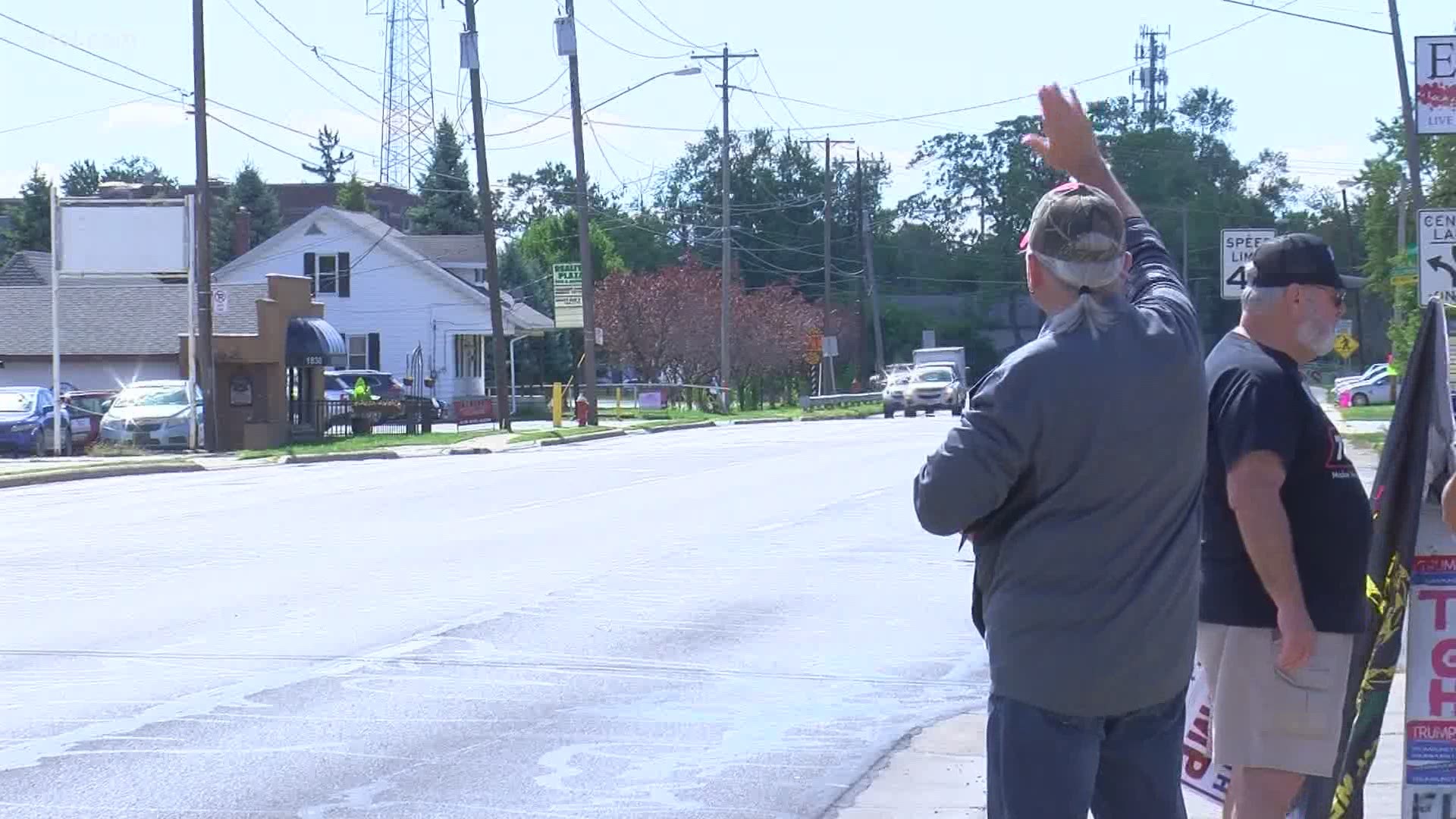 TOLEDO, Ohio — Supporters of President Donald Trump are rallying in Toledo ahead of his "Great American Comeback" campaign stop in northwest Ohio on Monday.

A Flag Waving Rally was held on the corner of north Reynolds and Fleet Friday morning and afternoon.

Gordon Brinker is a Michigan resident who attended President Trump's rally at the Huntington Center in downtown Toledo back in January.

"It was very cold. I sat out all night and it was 18 degrees. I won't forget that but the rally made it worth the while," Brinker said.

He said he won't be able to make the rally on Monday in Swanton, but he wanted to stop by the local rally to show his support where the nationally-known Trump Unity Bridge made an appearance.

The Trump Unity Bridge is a decorated float created and driven by Rob Cortis, a Michigan resident, throughout the United States in support of President Trump. Cortis delivers a message of unity as well as the importance of securing America's southern border.

"Our goal is to hit small towns. Catch up with the Trump campaign when it works with our schedule and we hit areas where President Trump can't be," said Cortis.

John Hill of Sylvania will be attending the upcoming rally and says he's ready to enjoy the comradery and enthusiasm.

"You meet a lot of interesting people. You meet guys anywhere from CEO's to Harley guys," Hill said.

When you register to attend the rally, you will have to check a box, saying "you understand and expressly acknowledge that an inherent risk of exposure to COVID-19 exists in any public place where people are present. In attending the event, you and any guests voluntarily assume all risks related to exposure to COVID-19, and waive, release, and discharge Donald J. Trump for President, Inc.; the host venue; or any of their affiliates, directors, officers, employees, agents, contractors, or volunteers from any and all liability under any theory, whether in negligence or otherwise, for any illness or injury."

"If you're a person that could be at-risk maybe you should skip it and watch it on TV," Brinker said.

The rally at the Eugene F. Kranz Toledo Express Airport in Swanton will be at 7 p.m. but doors open at 4 p.m.

You can click here for information regarding general admission.

Trump and Former Vice President Joe Biden will square off at the Health Education Campus of Case Western Reserve University and Cleveland Clinic on Tuesday, Sept. 29, inside the Sheila and Eric Samson Pavilion.

The debate will be 90 minutes long, airing from 9 p.m. to 10:30 p.m. The event will consist of six 15 minute segments. Fox News anchor Chris Wallace will serve as the debate's moderator.