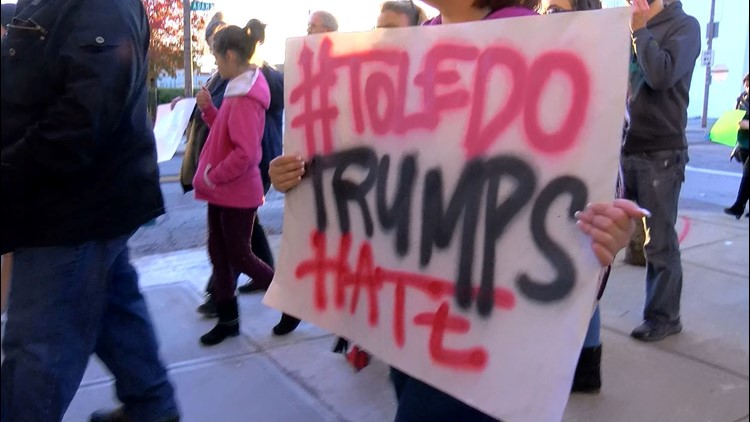 Activists and organizations in Ohio who oppose President Donald Trump are organizing demonstrations and protests during his visit to Toledo on Thursday.

RELATED: Going to the 'Keep America Great' rally Thursday? Here's what you need to know

Planned Parenthood of Ohio has created an event on Facebook called "Make Toledo Anti-Hate Again" to which over 200 people have RSVPed.

In the event's description, organizers call people to join them "to show that Toledo will not tolerate racist, sexist, anti-abortion, extremist candidates and presidents anymore."

The group is planning on meeting on Huron Street, where the orange line is on the map below, from 5 p.m. to 8 p.m.

Make Toledo Anti-Hate Again
Causes event in Toledo, OH by Planned Parenthood Advocates of Ohio and 6 others on Thursday, January 9 2020 with 611 people interested and 211 people going.

The Lucas County Democrats organized an event called "Trump Takedown 2020" to show the president a "frigid, you're-going-to-lose-this-county-by-20-points welcome." More than 100 people have confirmed their presence and over 400 have marked "interested."

The party will serve as support for peaceful demonstrations and will provide shuttles, a warming station and restrooms. Their headquarters at 1817 Avenue will be open from 2:30 p.m. to 8 p.m.

In the event's description, organizers said they will have volunteers working the protest to sign up those who also want to volunteer and register votes.

MoveOn, a progressive advocacy group, is organizing events across the country this week to prevent war with Iran. The one happening in Toledo will take place on Thursday at 131 N. Huron Street in downtown at 5 p.m.

Volunteers are texting residents in the area saying the president is "putting the country on a path to war with his illegal assassination of Iranian military leaders."

Equality Toledo Executive Director Sheena Barnes said they will not hold any protests but they will provide a safe place with resources available for members of the LGBTQ community.

They will open their headquarters at 3 p.m. on 440 Floyd Street to ensure members have a place to feel comfortable throughout the afternoon. At 7 p.m., the organization will host a discussion on how the LGBTQ community can take action in 2020.

Barnes said Equality Toledo does not engage in the political climate but wants to make sure members are respected, taken care of and safe.

If you are organizing any demonstrations and would like the information added to this article, please email rclo@wtol.com or news@wtol.com.