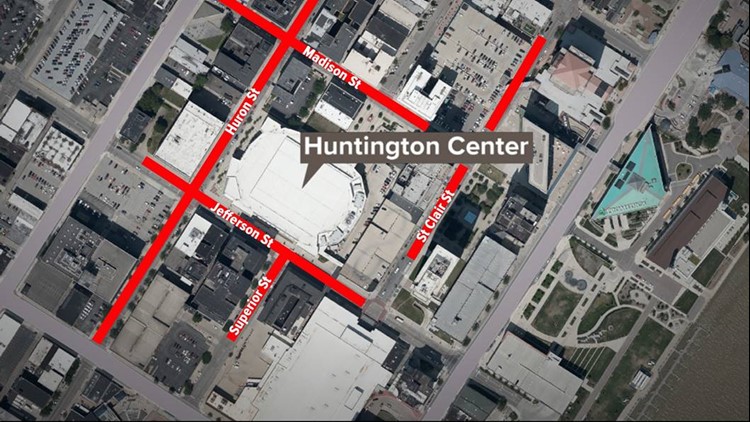 Officials warn of traffic advisory ahead of President Trump's visit

With the presidential visit just two days away, Toledo officials are already mapping out plans for traffic and parking downtown.

Thousands of people are expected to flood the streets as President Donald Trump and Vice President Mike Pence rally at the Huntington Center on Thursday.

"This will be our first encounter with the president being here since President Obama was here in 2012. We weren't down here, so this is a brand-new experience for all of us," said Jeremy Hartle, the owner of Jed's Downtown.

On Tuesday, the Toledo Police Department released a traffic advisory along with this map of road closures starting as soon as Wednesday night.

"Basically every road, every street around Huntington Center will be closed. You will have access to all the garages downtown, but it will be difficult to get in and out of the area," said Ignazio Messina, the communications director with the city of Toledo.

This is all expected to create limited parking, but Hartle says it's nothing new.

"That's an ongoing battle, whether the presidents here or whether it's a Walleye game, or a concert, or anything else. Parking is always a big point of emphasis. We do have a parking garage right across the street from us, which I have been told will be partially open. So hopefully we will be able to continue to have a big crowd here," said Hartle.

"It's probably a good idea to give yourself a couple hours to find parking, to get into the venue. I know I do that when there's a concert or a game," said Messina.

Meanwhile, ProMedica is offering some relief by opening its downtown parking garage to the public starting at 3 p.m.

"When people want to go somewhere, they're gonna get where they want to go. So if they have to park around the corner, and walk around here, I'm sure they'll make it," said Stacey Billups, a new employee at Club Yesterday in downtown.

TPD is warning that all street closures can change without notice.

While you may feel a little chaotic driving into downtown on Thursday, you're asked to bring your patience and to put safety first.

"Hopefully it'll be a coming together moment. But we just try and stay as positive as you can because Liberals, Conservatives, black, white, everyone loves chicken wings, everyone loves cold beer. So we're here to serve them either way," said Hartle.