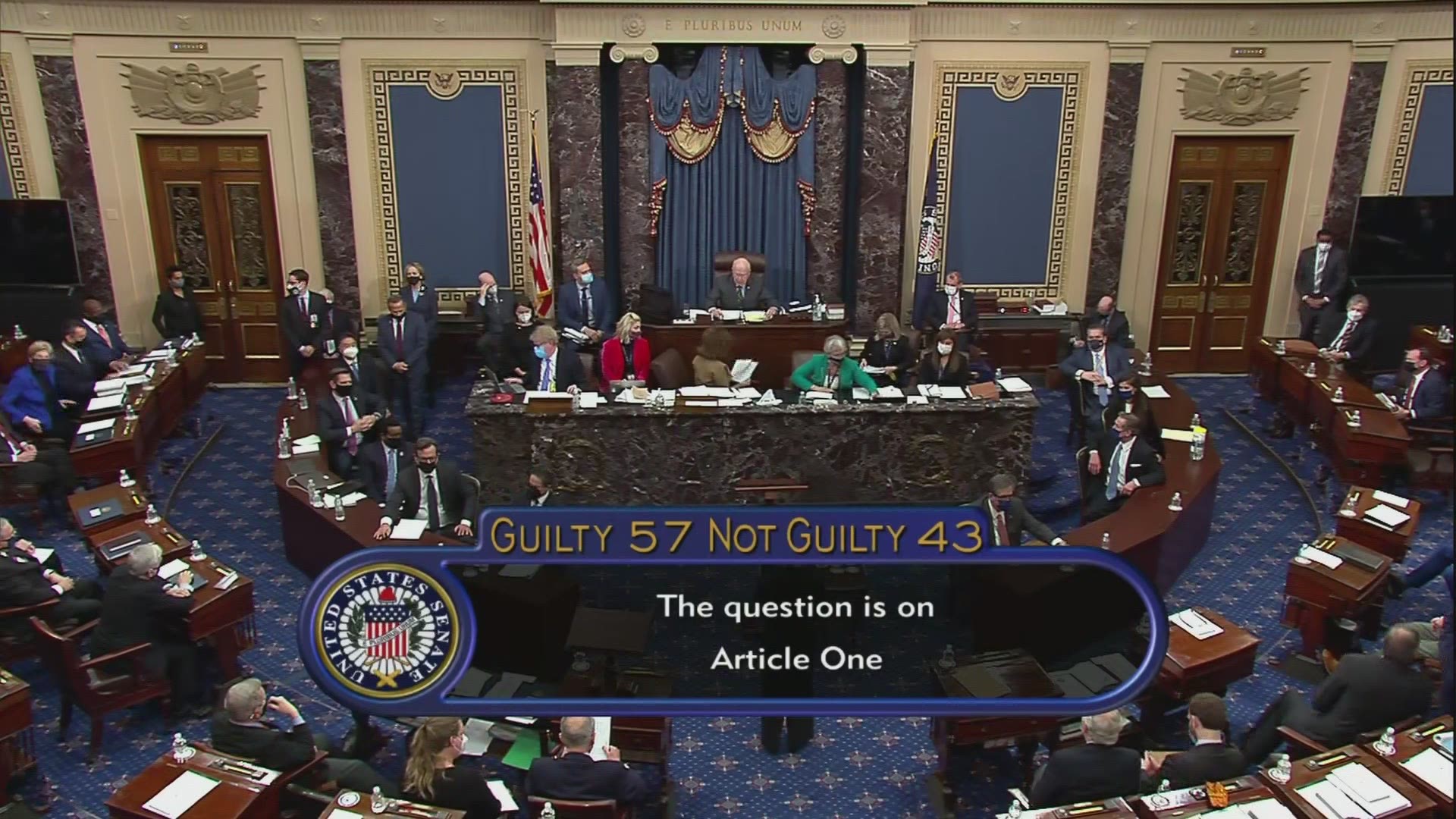 WASHINGTON, D.C., USA — Seven Republican Senators joined all the Democrats in voting to convict Donald Trump in his impeachment trial on Saturday, coming up short of the two-thirds majority needed to convict the former president.

Ohio Senator Rob Portman was not one of them.

Trump was on trial in the Senate for Incitement of Insurrection, relating to the January 6 attack on the U.S. Capitol, and following the U.S. House of Representatives vote to impeach him.

RELATED: Here are the Republicans who voted to convict Trump at 2nd impeachment trial

Senator Portman, along with the majority of Republicans in the chamber, voted not guilty, although he did say Trump bore some responsibility for the "seige of the U.S. Capitol."

In a statement issued after the vote Portman said, “what President Trump did that day was inexcusable because in his speech he encouraged the mob, and that he bears some responsibility for the tragic violence that occurred.”

Rather, Senator Portman says he voted not to convict the former president because he believes the Constitution does not allow for an impeachment of a president who is no longer in office.

“I believe the Constitution reserves the narrow tool of impeachment and conviction for removal of current officeholders and current presidents, and does not apply to former officeholders or former presidents,” reads Portman’s statement.

McConnell also said Trump bore responsibility for the violent attack on the U.S. Capitol on January 6 saying Trump’s actions relating to the attack were “a disgraceful, disgraceful dereliction of duty,” but said he believes the Senate has no jurisdiction over a former president.

Those who voted to acquit sent a clear message to our country and the world:

Violent attacks on our citizens, our democracy, and the will of the people have no consequences. pic.twitter.com/FUmarLM22V

“The siege of the U.S. Capitol on January 6 was an attack on democracy itself. That night, shortly after the rioters had been cleared from the Senate floor, I spoke to urge my colleagues to support the state certifications of the election results as our constitutional duty, and as a signal that ‘we will not be intimidated’ and that ‘mob rule is not going to prevail here.’

“I have said that what President Trump did that day was inexcusable because in his speech he encouraged the mob, and that he bears some responsibility for the tragic violence that occurred. I have also criticized his slow response as the mob stormed the U.S. Capitol, putting at risk the safety of Vice President Pence, law enforcement officers, and others who work in the Capitol. Even after the attack, some of the language in his tweets and in a video showed sympathy for the violent mob. In response, I called on President Trump to ‘explicitly urge his supporters to remain peaceful and refrain from violence.’

“But the question I must answer is not whether President Trump said and did things that were reckless and encouraged the mob. I believe that happened. The threshold question I must answer is whether a former president can be convicted by the Senate in the context of an impeachment. This would be unprecedented. Consistent with the two votes I have already taken in this process, I believe the Constitution reserves the narrow tool of impeachment and conviction for removal of current officeholders and current presidents, and does not apply to former officeholders or former presidents. Impeachment in the Constitution is fundamentally about removing someone from office.

“I think the Framers of the Constitution understood that it would be inappropriate to allow Congress – an inherently political body – to convict former presidents. Instead, the appropriate place to address former officials’ conduct is the criminal justice system. In fact, the Constitution makes clear that former presidents are subject to the criminal justice system. That is where the issues raised by the president’s inexcusable actions and words must be addressed.

“I have a duty to uphold my oath to the Constitution and that’s why I voted as I did, on the state certifications of the election on January 6, on the jurisdictional issue earlier this week, and on the final vote on conviction today. My decision today in no way condones the president’s conduct. On the contrary, it is keeping an oath to the Constitution, that I believe the president did not keep on January 6.

“Our country is already deeply divided. My decision was based on my reading of the Constitution, but I believe the Framers understood that convicting a former president and disqualifying him or her from running again pulls people further apart. Instead, our task should be to help bridge the growing gaps that separate us. President Biden said in his inaugural address, ‘This is our historic moment of crisis and challenge, and unity is the path forward.’ I agree, and will continue to do my part to try to find that common ground to bring our country together to address the many challenges we face.”