The ban resurfaced as an amendment to a bill about Florida schools. After passing the House earlier in the day, Republican senators gave it the OK. 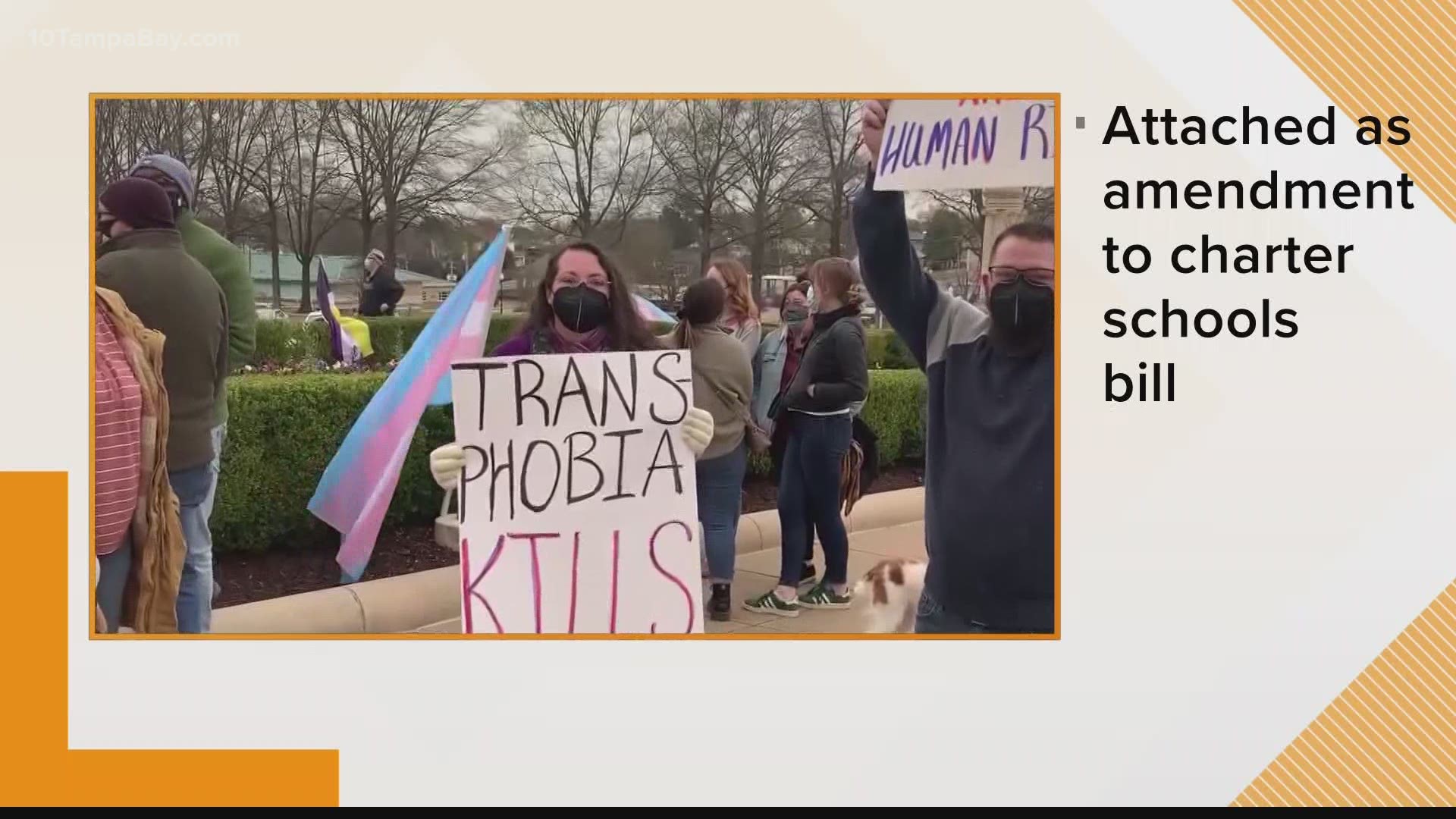 TALLAHASSEE, Fla. — Florida Republican lawmakers approved a controversial ban on transgender girls from participating in school sports in a sudden development as the state's legislative session comes to a close.

State Rep. Kaylee Tuck, R-Lake Placid, on Wednesday introduced an amendment featuring the ban to a broader charter schools bill, which was approved in the House by a 77-38 vote. It wasn't before long senators approved the bill by a 23-16 vote, sending it -- and the amendment -- to Gov. Ron DeSantis for his signature to become law.

The transgender ban originally surfaced earlier this month by Tuck in HB 1475 and had passed the chamber before stalling in the Senate. In addition to banning transgender girls and women from participating in school sports, the bill would have required any dispute of the student's biological sex to be resolved by a health care provider by examining "the student's reproductive anatomy."

The Miami Herald first reported the newly passed amendment strips that language out. Instead, a student would have to have their birth gender verified by a birth certificate -- an idea proposed by House Democrats initially during the debate of HB 1475 but rejected by Republicans at the time.

Because the Senate version of the transgender ban, introduced by Republican State Sen. Kelli Stargel of Lakeland, died in committee, it never was heard.

"I take objection to the fact that I don't care about these children, I do. And I embrace a child who would like to be trans, that's their choice. If they're LGB...gay, they have that choice," said Stargel, perpetuating a stigma seen as hurtful and degrading.

Neither she nor Tuck could cite an instance when earlier interviewed by the Miami Herald where a transgender athlete unfairly impacted scholastic athletic competition in Florida.

RELATED: 'What are you afraid of,' asks mom of transgender child to Florida lawmakers

Tuck earlier defended the transgender ban to the Associated Press, saying, "The act is pro-women and pro-girls and only acknowledges the biological differences between men and women." Florida and other states' consideration of similar bans caught the attention of the National Collegiate Athletic Association Board of Governors, which said it would consider not having college championships in states that had such policies.

"Florida's Republicans are pathetically proud of their hatred," Florida LGBTQ+ Democratic Caucus President Stephen Gaskill said in a statement after the passing of the charter school bill and the attached transgender ban.

"They legislate their own bigotry rather than the concerns of their constituents. Deliberately hurting transgender children and playing politics with their lives is beyond shameless. Our community will work tirelessly to hold accountable the politicians who voted for this despicable legislation."

RELATED: Anti-transgender legislation has been introduced in more than 30 states in 2021

"Despite hearing the voices of trans kids and their families time and time again, extremists in the legislature have made it their mission to make trans children pawns in their culture war," said Gina Duncan, Equality Florida Director of Transgender Equality in a statement. "Now, instead of being open about their bigotry, they are negotiating the future of anti-LGBTQ discrimination in smoke-filled back rooms and attempting to attach this amendment to a completely unrelated bill."