Joe Biden makes campaign stop in Cleveland: 'It's time for Donald Trump to pack his bags and go home'

'The power to change the country is in your hands.' 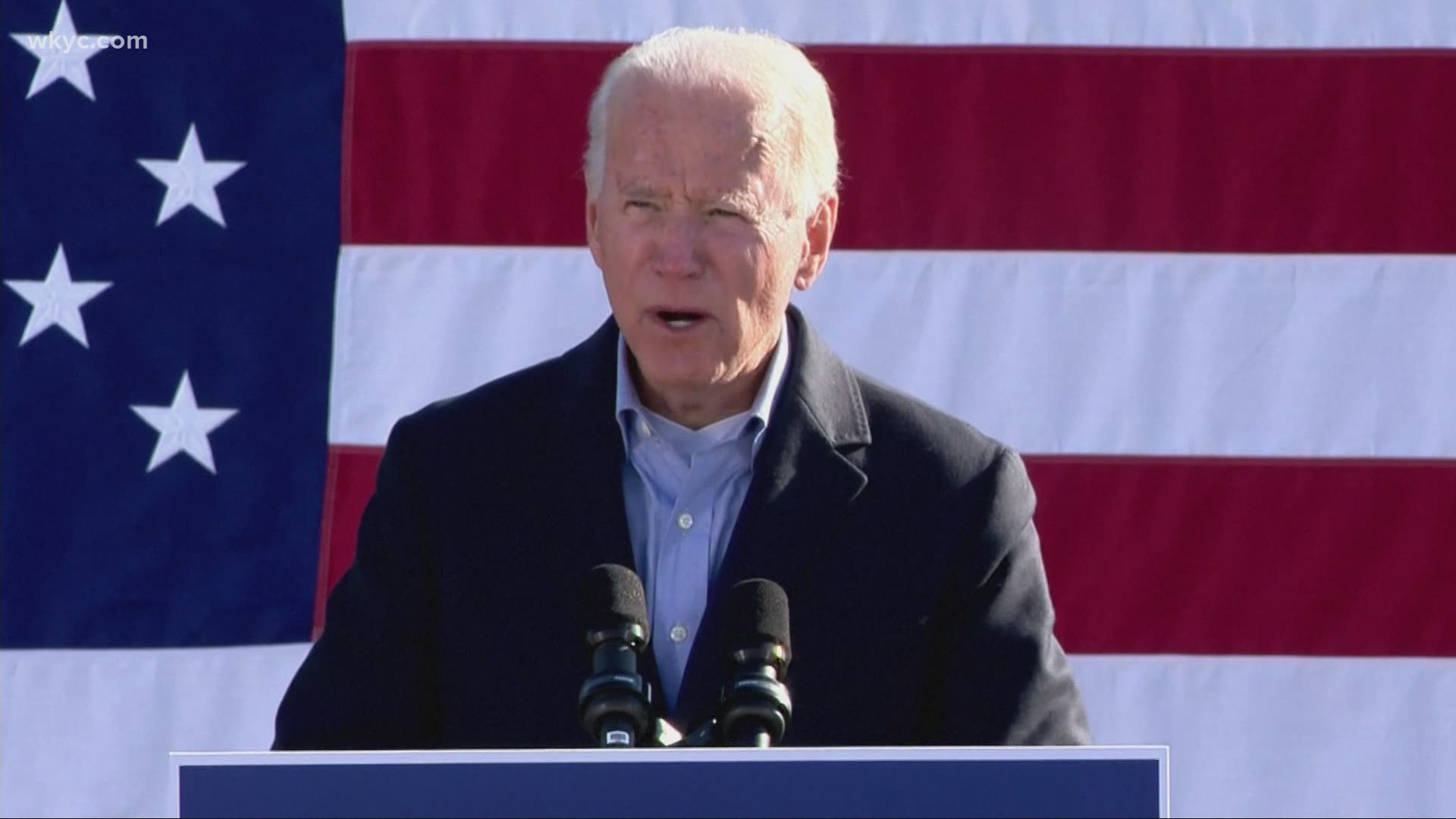 CLEVELAND — Former Vice President Joe Biden swung through Cleveland for a campaign stop at Burke Lakefront Airport just one day ahead of the election.

RELATED: VOTER GUIDE | Everything you need to know about Ohio's 2020 election from important dates to finding your polling place

He urged voters to make their voices heard.

“The power to change the country is in your hands," Biden said. "I don’t care how much Donald Trump tries, there’s nothing he’s going to do to stop the people in this nation from voting.”

Biden also said it's time for America to move forward without President Donald Trump in office.

“It’s time for Donald Trump to pack his bags and go home," he declared. "We’re done. We’re done with the chaos. We’re done with the tweets, the anger, the hate, the failure, the irresponsibility. We’ve got a whole lot of work to do. If I’m elected your president, I’m going to act on day one."

Biden said he has a plan to get the COVID-19 crisis under control.

"On day one of my presidency, we’re going to put into action a plan that I’ve been talking about for months and he’s been paying no attention to: Masking, social distancing, testing, tracing, a plan for a fair and full and free distribution of therapeutics and vaccines when we get one. Imagine where we’d be had this president, from the beginning, just wore a mask instead of mocking wearing a mask. I can tell you this, we wouldn’t have nine million confirmed COVID cases in this nation. We wouldn’t have over 230,000 deaths. We wouldn’t be seeing those new record numbers of cases we’re seeing every single day right now.”

Biden also vowed to build on the Affordable Care Act.

“I’m going to increase subsidies and lower premiums, deductibles and out-of-pocket expenses and surprise billings," he said. "We’re going to reduce drug costs by 60% by allowing Medicare to negotiate drug prices for all of us. Folks, it’s going to cost more money, but guess how I’m going to pay for it? Trump’s going to start paying some taxes.”

He closed his 27-minute speech in Cleveland with the following statement: “It’s time to stand up. It’s time to take back our democracy. We can do this. We’re so much better than this. We can be our best. Ladies and gentlemen, this is the United States of America, there’s not a damn thing we can’t do. Nothing. So let’s get up and do it! God bless you all and may God protect our troops. Thank you, thank you, thank you.”

Outside of Burke Lakefront Airport Monday afternoon, more than 60 people protested Biden’s appearance in Cleveland for a last-minute push to get votes.

A woman named Paula walked up and down the airport entrance waving a ‘Trump 2020 flag.' “What brought me out is the spirit and the positivity of the Trump supporters,” says Paula.

“I'm asking for you to go out tomorrow or sooner, you tend to like to vote on Election Day, right? We all do. You have the power to vote, so go out and vote,” says President Trump.

Back here at home, Cleveland City Councilman Joseph Jones drove by the Trump supporters at Burke with his truck and loud speakers playing. He says he fully understands why Mr. Biden made the last-minute stop in Cleveland.

“It says that Ohio is a freefall state at this point in time that Ohio will be able to turn toward a democratic side,” says Jones.

All of the people 3News spoke with today, whether a Biden or Trump supporter had the same message to registered voters who haven’t cast their ballot:

“It really makes all the difference to go out there and vote,” says Paula.

“Our community, our city, our state, our nation and the world depends on you getting out and voting,” says Jones.

“Please come out and vote don’t let anybody talk you out of it,” says Leslie Boyer-Bass.

Monday marked Biden's second visit to Cleveland during this election season. It comes after he was in town for the first debate with President Donald Trump in September. Democratic vice presidential nominee Kamala Harris made a quick stop in Cleveland last month.

The Republican Party of Cuyahoga County issued the following statement Monday ahead of Biden's visit:

A last minute, unplanned campaign stop in Cleveland the day before Election Day reinforces that the Biden campaign knows they are in trouble. Biden and Harris spent the past week desperately criss-crossing the country after their own Democrat strategists sounded the alarm about their underperformance in minority voter turnout in urban areas like Cleveland. But they are too late to the game due to the lack of voter enthusiasm for Biden and Harris. The Republican party spent the past two years building a strong ground game to earn voter support throughout Ohio. Momentum is exceptionally strong within our Cuyahoga County Black and Latino communities, with a record breaking number of minority voters supporting President Trump and down ballot Republican candidates.

If you’re planning to vote Tuesday, the polls are open throughout Ohio from 6:30 a.m. until 7:30 p.m. If you’re mailing in an absentee ballot, it must be postmarked by Monday, Nov. 2. Otherwise, you can drop it off at your local Board of Elections until the polls close at 7:30 p.m. on Tuesday.

We streamed Biden's visit to Cleveland, which you can watch in full below: