FULL STATEMENT: Georgia Secretary of State responds to calls for his resignation 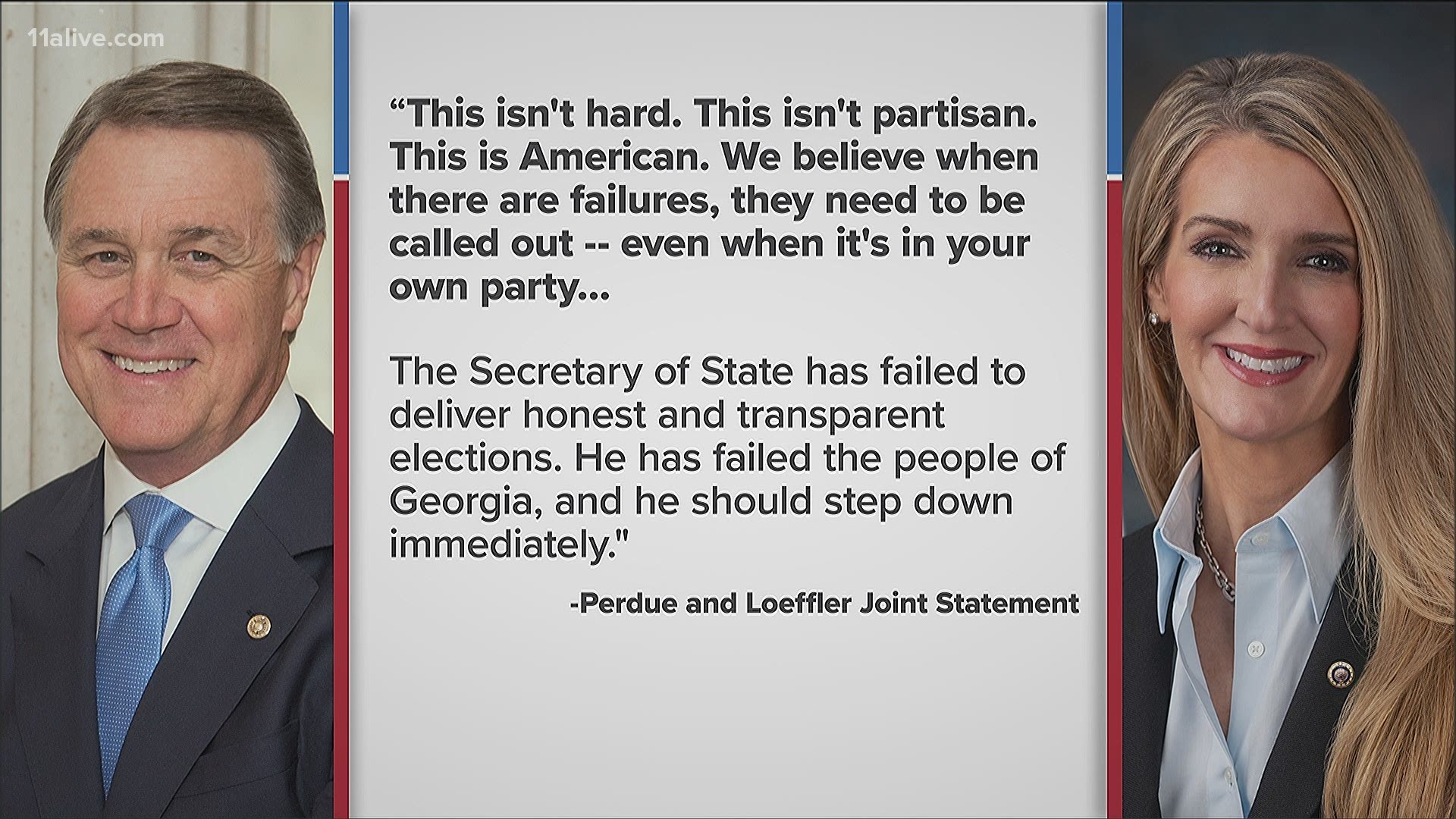 ATLANTA — Georgia's Secretary of State responded to calls for his resignation over unproven claims of "failures" in election management and a "lack of transparency," saying bluntly, "that's not going to happen."

Secretary Brad Raffesnperger issued the lengthy statement after fellow Georgia Republican Sens. Kelly Loeffler and David Perdue called the management of the Nov. 3 election an "embarrassment," saying those "failures ... need to be called out." (Gov. Brian Kemp's press secretary also later tweeted a statement from the office echoing the senators' statements.) Neither has specified what those failures are. No similar claims were made after any other Georgia election, including the June 9 primaries when hours-long lines plagued polling locations.

Both Loeffler and Perdue, avid supporters of President Trump, are headed into high-stakes runoffs with Democratic opponents to defend their seats. The results will likely determine which political party controls the Senate in the new session.

Many notable Republicans, following President Trump's lead, have repeatedly made claims of election fraud after Joe Biden was projected to win the election; however, they've not offered evidence. Both Loeffler and Perdue said that every "legal" vote should be counted, while "illegal votes" should not; though, neither had specified what "illegal" votes they are referring to.

As for the allegations of a "lack of transparency," the Secretary of State's Office has been holding daily press conferences on business days since election day and provided nearly hourly updates on vote tallies on election night. The office has repeatedly said there have been no widespread irregularities while acknowledging there will be instances of double voting, as there are with every election.

Read below for the full statement.

Georgia Secretary of State responds to calls for resignation

Earlier today Senators Loeffler and Perdue called for my resignation.

Let me start by saying that is not going to happen. The voters of Georgia hired me, and the voters will be the one to fire me. As Secretary of State, I’ll continue to fight every day to ensure fair elections in Georgia, that every legal vote counts, and that illegal votes don’t count.

I know emotions are running high. Politics are involved in everything right now. If I was Senator Perdue, I’d be irritated I was in a runoff. And both Senators and I are all unhappy with the potential outcome for our President.

But I am the duly elected Secretary of State. One of my duties involves helping to run elections for all Georgia voters. I have taken that oath, and I will execute that duty and follow Georgia law.

Here are the facts.

The election on Tuesday, November 3, 2020 in Georgia, from an election administration perspective was a resounding success. The average wait time to vote was 3 minutes. Almost 5 million Georgians cast a vote in this election…that is a record turnout. Nearly 75% of Georgia voters voted in person, while 25% to vote no-excuse absentee. That no-excuse absentee law was adopted by a Republican legislature, supported by Speaker David Ralston, and signed into law by then-Governor Sonny Perdue.

The process of reporting results has been orderly and followed the law. Where there have been specific allegations of illegal voting, my office has dispatched investigators. We have put a monitor in at Fulton County…one of our longtime problem Democrat-run counties.

The investigation of potential double voters was the first of its kind done in the history of the Secretary of State’s office, and we will investigate any of those instances from the general election as well.

I care about counting each and every legal vote…and assuring that illegal votes aren’t counted.

And as far as lack of transparency…we were literally putting releases of results up at a minimum hourly. I and my office have been holding daily or twice-daily briefings for the press to walk them through all the numbers. So that particular charge is laughable.

Was there illegal voting? I am sure there was. And my office is investigating all of it. Does it rise to the numbers or margin necessary to change the outcome to where President Trump is given Georgia’s electoral votes? That is unlikely.

One thing I have learned in my time as Secretary of State is that a lot of difficulties in administering elections are caused by federal law. Federal law, not state law, is what makes it so difficult to keep clean voter rolls. Federal law, not state law, is what allows people to register to vote before a runoff even if they weren’t registered for the general election. Now that Senators Perdue and Loeffler are concerned about elections, hopefully they can fix these federal laws.

My job is to follow Georgia law and see to it that all legal votes, and no illegal votes, are counted properly and accurately. As Secretary of State, that is my duty, and I will continue to do my duty. As a Republican, I am concerned about Republicans keeping the U.S. Senate. I recommend that Senators Loeffler and Perdue start focusing on that.