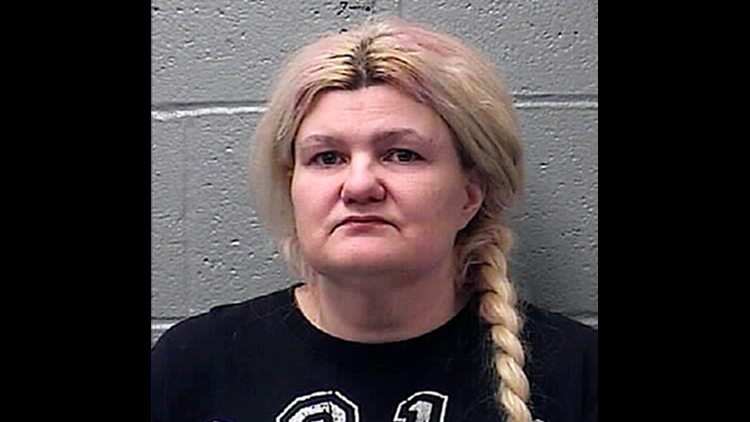 This photo provided by the St. Francois County Sheriff's Department in Farmington, Mo., shows Malissa Ancona, Ancona has admitted fatally shooting her husband, an imperial wizard in the Ku Klux Klan. The St. Louis Post-Dispatch reports that Ancona pleaded guilty Friday, April 19, 2019 to second-degree murder, tampering with evidence and abandonment of a corpse, and was sentenced to life in prison as part of a plea agreement. (St. Francois County Sheriff's Department via AP)

The wife of a Missouri Ku Klux Klan leader admitted Friday to fatally shooting her husband.

Malissa Ancona was sentenced to life in prison Friday under a deal in which she pleaded guilty to second-degree murder, tampering with evidence and abandonment of a corpse in the February 2017 death of Frank Ancona Jr., the St. Louis Post-Dispatch reported. Ancona, who had identified himself as a KKK imperial wizard, had recently asked his wife for a divorce, according to officials and court records.

Malissa Ancona initially reported her husband missing, and a family fishing in southaeast Missouri found his body near a river days later. She later claimed her son, Paul Jinkerson Jr., shot him while he was sleeping.

Jinkerson faces the same charges as his mom, but she said Friday that he had no role in the shooting. She said he did help clean up the crime scene and helped dump the body. the walls of their bedroom and dispose of bloody bedding.

"I fired both shots that killed my husband," she told Circuit Judge Wendy Wexler Horn. She said she cleaned the walls of their bedroom and disposed of bloody bedding to try to hide the crime.

Asked how the plea would affect Jinkerson's trial, his lawyer, Eric Barnhart, responded, "I mean the true killer..." before having his sentence finished by Jinkerson's father: "admitted her guilt today."

Ancona originally told police that her son shot her husband with a 9 mm handgun and agreed to testify against him last year. She reversed herself in a letter from jail, writing to Horn that she was "under the influence" and couldn't recall what happened when her husband was shot.

During Friday's court hearing, Frank Ancona's father, Frank Ancona Sr., told the judge that he was forced to identify his only son's body, and said his son had "no face left." Ancona Sr. said his son was killed because he was planning on leaving Malissa Ancona, whom he called a "terrible wife."

Ancona's daughter, Carolyn Ancona, through tears, said, "He didn't deserve this. No one deserves this."