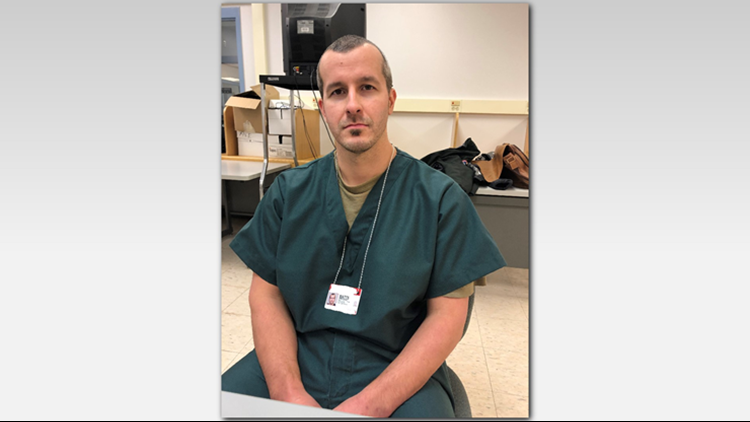 In his own words: Chris Watts describes murders of his family in chilling detail

DENVER — Warning, the following story contains details that are extremely disturbing and graphic details and may be very difficult for some people to read or hear.

Chris Watts offered chilling details about the murders of his pregnant wife and two young daughters during a five-hour interview inside of the Wisconsin prison where he is serving three life sentences plus 84 years.

A summary of the conversation and the tapes from the interview were publicly released on Thursday morning.

“I don’t even want to say it felt like I had to, it just felt like there was already something in my mind that was implanted, that I was gonna do it and when I woke up that morning, it was gonna happen and I had no control over it,” Watts said of the strangulation death of his 34-year-old wife Shanann Watts.

He told investigators that the morning of Aug. 13, Shanann confronted him about a possible affair. He said he couldn’t come clean about his relationship with a coworker named Nicole Kessinger. Watts denied affairs with the Wyoming man and Colorado woman who have since come forward with allegations.

Watts said he was shaking after he saw his wife die, and it felt like a “traumatic event.” His 4-year-old daughter Bella must have been awoken by the noise, Watts said, and came into the room holding a blanket.

“Mommy don’t feel good,” Watts responded, according to a report from the Colorado Bureau of Investigation.

Watts told investigators he wrapped his wife’s body into a sheet and loaded her into his truck. His 3-year-old daughter, Celeste, was also awoken by the noise, and he put his two girls into the backseat and drove to a rural Weld County oil field.

The report says Watts buried his wife while his two younger daughters were watching. He said he smothered Celeste first with a blue Yankees blanket and put her body into an oil well.

“He then put the same Yankees blanket over Bella’s head and ‘did the same thing,’” the report says. “Bella said ‘daddy, no!’ and it was the last words she spoke.”

Prosecutors have said that Bella fought back.

Watts told investigators that he went on to load his other daughter into a separate oil tank.

“Every time he closes his eyes, he hears Bella say ‘Daddy, no,’” the report says. “He hears it every day.”

Watts said he killed his daughters because he was “angry with Shanann” for separating him from his family and that he went “into a rage.”

“I don’t know if that had something to do with it,” Watts told investigators .”That something inside me just triggered and it then it just like, all that pent up from the wedding and everything … it’s like a long fuse that finally just went to its end.”

He claimed that Shanann and his mother never got along, and he was angry his wife told him his parents could never see their grandchildren again.

During the interview with investigators, Watts said he didn’t know why he spoke to the media and lied in the hours following the disappearance of his wife and daughters.

He was arrested on Aug. 15, 2018, and pleaded guilty to nine separate counts of Nov. 6 – something that meant he would never walk free again, but spared him the death penalty.

Watts said the Wisconsin prison is radically different than the Weld County jail, where he said inmates would yell at him at night and tell him all the ways he could take his own life in his cell. He said he prayed to God to leave Colorado.

Watts told investigators that he has pictures of his wife and daughters in his cell and that he “talks to them every morning and every night.”

During the interview, Watts claimed that he reads the “same book he used to read to Celeste” to “his daughters” every night.

“He wished it never happened and he never had a blinder over his eyes and could have seen what was going on,” according to the report.

Shannon Watts and her daughters Bella and Celeste
Case background:

With his guilty plea, Watts, 33, guaranteed he would spend the rest of his life in prison with no chance of parole for murdering his wife Shanann, 34, and ending her pregnancy, and for killing his two daughters, Bella, 4, and Celeste, 3.

That day, a clearly frustrated Michael Rourke, the Weld County district attorney, wondered aloud whether anyone would ever learn what actually happened.

Thursday morning, the “how” and “why” of the crime is expected to become more clear.

In addition to audio recordings, the CBI plans to release two photographs, a report and a letter from the agency’s executive director, Stan Hilkey.

The shocking case began Aug. 13 when a friend reported that Shanann Watts – pregnant with a boy the couple planned to name Nico – and her daughters were missing. Chris Watts initially told police that he’d left for work while his wife and kids were sleeping.

The following day, he spoke with 9NEWS, calling the disappearance of his family “earth-shattering” and making a plea for their return. A day later, investigators arrested him, and the next day investigators found Shanann Watts’ body buried in a shallow grave and the remains of the two girls in nearby oil storage tanks in rural Weld County.

Watts initially claimed that his wife had killed the two girls and that he’d then murdered her in a rage – a claim that neither investigators nor Rourke ever believed.

RELATED: Coverage: The Chris Watts plea, sentence and the murders of Shanann, Bella and Celeste WattsRELATED: 'I had no part in any of that:' Newly-released videos show Chris Watts failing polygraph testRELATED: ‘You’re an evil monster:’ Chris Watts sentenced for deaths of pregnant wife, two young daughters

Then came his guilty pleas to all charges:

This photo of a Weld County oil tank battery was shown to Chris Watts during a polygraph after his family disappeared. He marked an “S” where Shanann was buried and a “B” and “C” on the tanks that held the bodies of his daughters, Bella and Celeste.
RELATED: Lengthy documents detail marital problems, affair in Chris Watts murder caseRELATED: Chris Watts case: What we know now and what's nextRELATED: Read the full arrest affidavit in the Watts murder case

Shanann Watts had returned from a business trip early ‪on Aug. 13, dropped off by a friend just before ‪2 a.m. at her home in the 2800 block of Saratoga Trail in Frederick. Shanann Watts, who was 15 weeks pregnant and not feeling well on the business trip, and the two girls were reported missing about 12 hours later when that same friend became concerned and went to the family’s home.

The friend discovered that Shanann Watts’ car was parked in the garage and could not get past a latch on the front door, so she called Chris Watts and asked him to come home, fearing Shanann had suffered some kind of medical issue, according to the affidavit.

The first officer at the scene found all the doors and windows were locked. After Chris Watts arrived, he let the officer into the home.

The house where Chris Watts murdered his family will be auctioned off to the highest bidder in April.
RELATED: Couple who defended Chris Watts 'had no idea'RELATED: Why hasn't Chris Watts been charged with killing his unborn child?RELATED: Man accused of killing wife, daughters spoke to 9NEWS the day before his arrest

According to the affidavit, Chris Watts told the officer his wife had come home ‪around 2 a.m., he’d awakened later “and began talking to Shanann about marital separation and informed her he wanted to initiate the separation,” the affidavit said.

“Chris stated it was a civil conversation and they were not arguing but were emotional,” the affidavit said.

Two days later – as the search for clues dominated the news cycle – that story crumbled amid evidence that he’d been carrying on an affair with a co-worker.