Federal prosecutors have told a judge they will need to review evidence against the officers to determine if the actions will impact prosecutions. 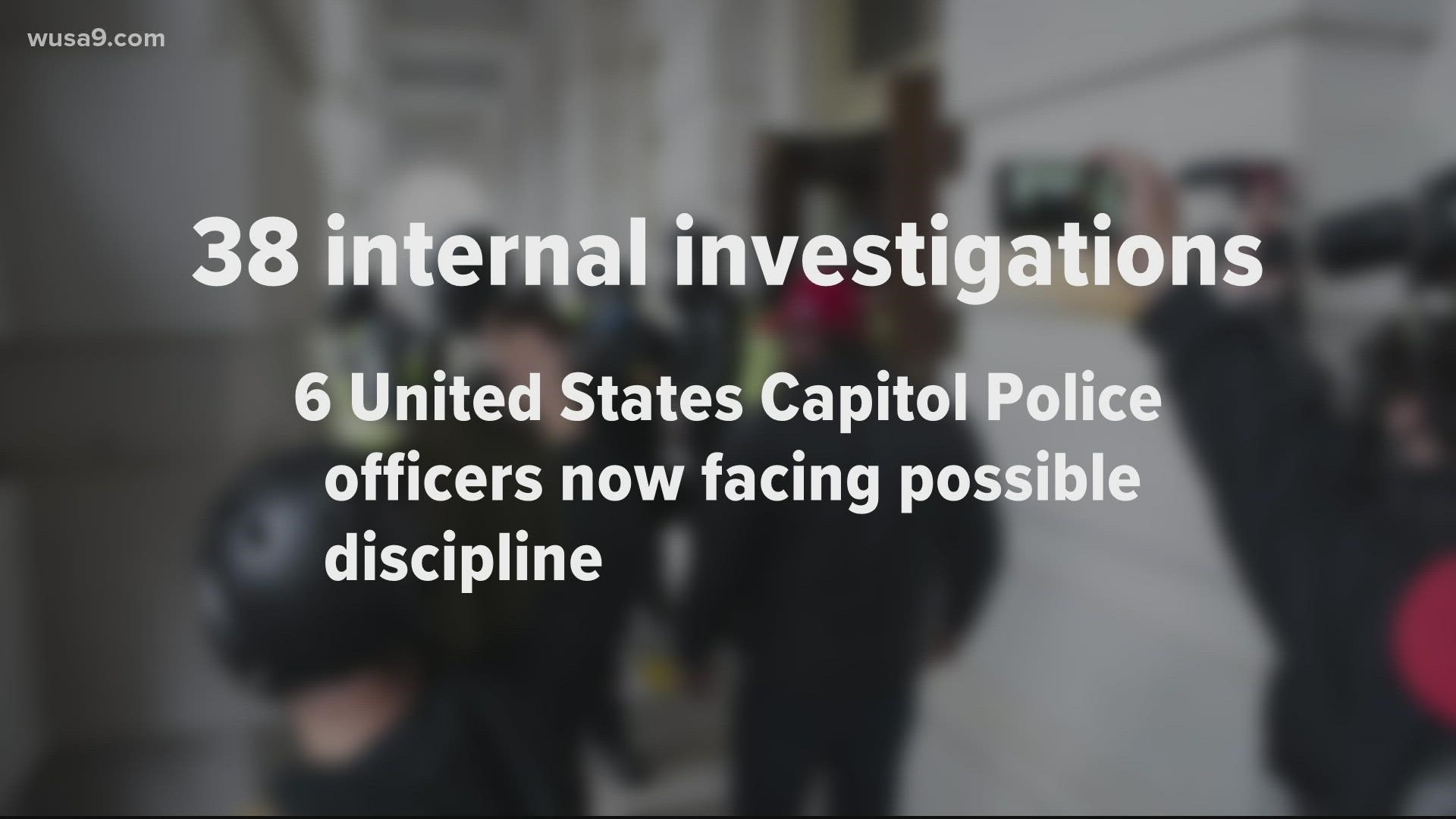 WASHINGTON — Six United States Capitol Police officers have been found responsible for wrongdoing as a result of their actions during the Capitol riots on Jan. 6.

No details were given about the incidents that prompted the complaints.

The USCP release also says another case about an official who is accused of unsatisfactory performance and conduct unbecoming is still pending. USCP said that administrative investigation started after a criminal investigation into the official, in which charges were not filed. USCP says the U.S. Attorney’s Office did not find sufficient evidence that any of the officers committed a crime.

“The six sustained cases should not diminish the heroic efforts of the United States Capitol Police officers,” the statement read. “On January 6, the bravery and courage exhibited by the vast majority of our employees was inspiring.”

RELATED: US Capitol Police release results of internal investigations into actions of 38 officers during the Jan. 6 riot

Five people died as a result of the attack at the Capitol on Jan. 6 including a police officer. Four other officers on duty that day have since died by suicide, and more than 100 officers were injured after being harassed, beaten and sprayed with chemical substances by the mob.

RELATED: Fourth officer who responded to the US Capitol on January 6 dies by suicide

On timing of the release, Saturday evening, the @CapitolPolice had this to say: “The Public Information Office sent it the second we were done reviewing. We have been working on it all weekend. No reason to hold back until Monday.” @wusa9 #CapitolRiots https://t.co/O5uIk4aa1G

But questions have been raised, particularly by attorneys representing Capitol riot defendants, about the role U.S. Capitol Police played in allowing people to enter the Capitol on Jan. 6. At least one U.S. Capitol Police Officer was seen on video taking a selfie with a rioter.

“This is a gamechanger for many of the charges," said Nabeel Kibria, a D.C. defense attorney who represented Capitol Riot defendants who pled guilty to misdemeanor charges. “Any interactions those officers had with defendants would probably taint the case somewhat, and DOJ would probably have to take a hard look at how they want to deal with that.”

Already the sustained violations by the USCP officers are having ripple effects in court. Monday during a hearing for Thomas Fee of New York, who is charged with four criminal counts including violent entry and disorderly conduct in a Capitol Building, federal prosecutors told Judge John Bates they needed to review video evidence against the six officers before moving forward with Fee’s case.

Credit: US Department of Justice
Thomas Fee of New York is charged with 4 criminal counts including Violent Entry and Disorderly Conduct in a Capitol Building.

The prosecutors said they “don’t think there’s anything exculpatory toward the client” but that they “need to see the videos.”

Prosecutors told the judge they also expected to receive a list of the officer’s involved, which have not been released publicly. But Monday, a USCP spokesperson told WUSA9 “officer names, witness names, and complainant names were redacted,” from the information turned over to the Department of Justice.

“USCP internal investigations, including any recommended disciplinary actions, as well as personal matters are not public information” the USCP statement read.

Yet the statement continued, saying "The Department is committed to accountability when officers fail to meet the standards governed by USCP policies and the Congressional Communities expectations."

In a statement, Gus Papathanasiou, chairman of the Capitol Police Officers’ Union, said although he does not condone the inappropriate behavior on the part of any of his officers, they are a small minority of the 1,200 front-line Capitol Police officers who defended the Capitol January 6.

“I believe in accountability," Papathanasiou said. "Even one incident of an officer not fulfilling their duty is one too many. Yet, we have leaders still on the payroll who completely failed to fulfill their duties, up to and during the Capitol attack, who have evaded all consequences. Some of those leaders that were in charge on Jan. 6 failed miserably on that day and have since been promoted as they hide in plain sight.”

🚨Contradictory statement🚨@CapitolPolice “internal investigations, including any recommended disciplinary actions,as well as personnel matters are not public information. The Department is committed to accountability when officers fail to meet the standards governed by USCP” 1/2