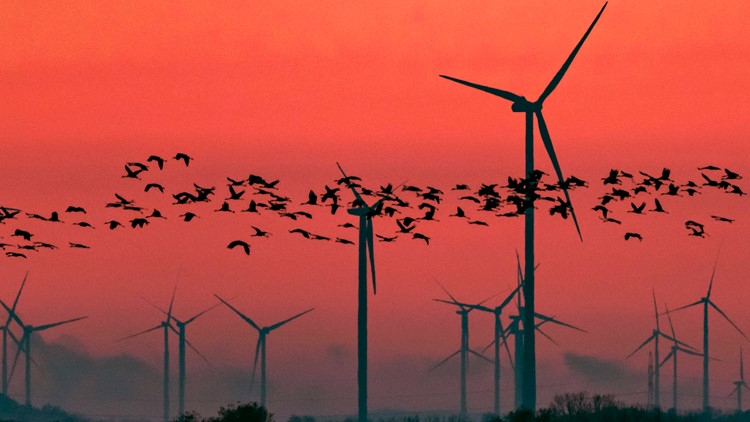 WEST PALM BEACH, Fla — The commander in chief has declared war, sort of, on windmills.

The renewable energy source is actually a familiar enemy for the tens of thousands of people who attend President Donald Trump’s campaign rallies.

Trump told a group of conservative students Sunday in West Palm Beach, “They’re noisy. They kill the birds. You want to see a bird graveyard?... Go under a windmill someday. You’ll see more birds than you’ve ever seen ever in your life.”

He said even bald eagles are getting killed by the giant turbines.

“If you shoot a bald eagle, they want to put you in jail for 10 years. A windmill will kill many bald eagles. It’s true,” Trump said.

The president began his weekend assault on wind turbines by attacking their cost and environmental impact.

“You know, I know windmills very much. I’ve studied it better than anybody I know. It’s very expensive…Gases are spewing into the atmosphere. You know we have a world, right?” said the president.

The U.S. Fish & Wildlife Service agrees windmills pose a danger to bird populations. More than 140,000 birds are killed every year – and that number could actually be much higher.

Size and speed are the real threats.

According to Gizmodo, a turbine blade can span more than 240 feet and it can whip around at 180 mph.

As for Trump’s claims about fumes and gases – it appears he was referring specifically to the processes other countries use to build them.

“They’re made in China and Germany mostly — very few made here, almost none. But they’re manufactured tremendous — if you’re into this — tremendous fumes,” Trump said.

So, where did the president’s distaste for windmills come from?

He reportedly turned his back on them years before he ran for office, but it was just business.

According to the Washington Post, Trump filed a lawsuit after learning Scotland planned to install offshore windmills in view of his Aberdeen golf club.

BBC reported in 2015 that he lost, and the Scottish windmills are still spinning.

RELATED: Forecast: Climate-damaging emissions will climb until at least 2040