Fred VanVleet has agreed to remain with 2019 champion Toronto. Charlotte has wanted now ex-Celtic Gordon Hayward for years, and finally landed him. 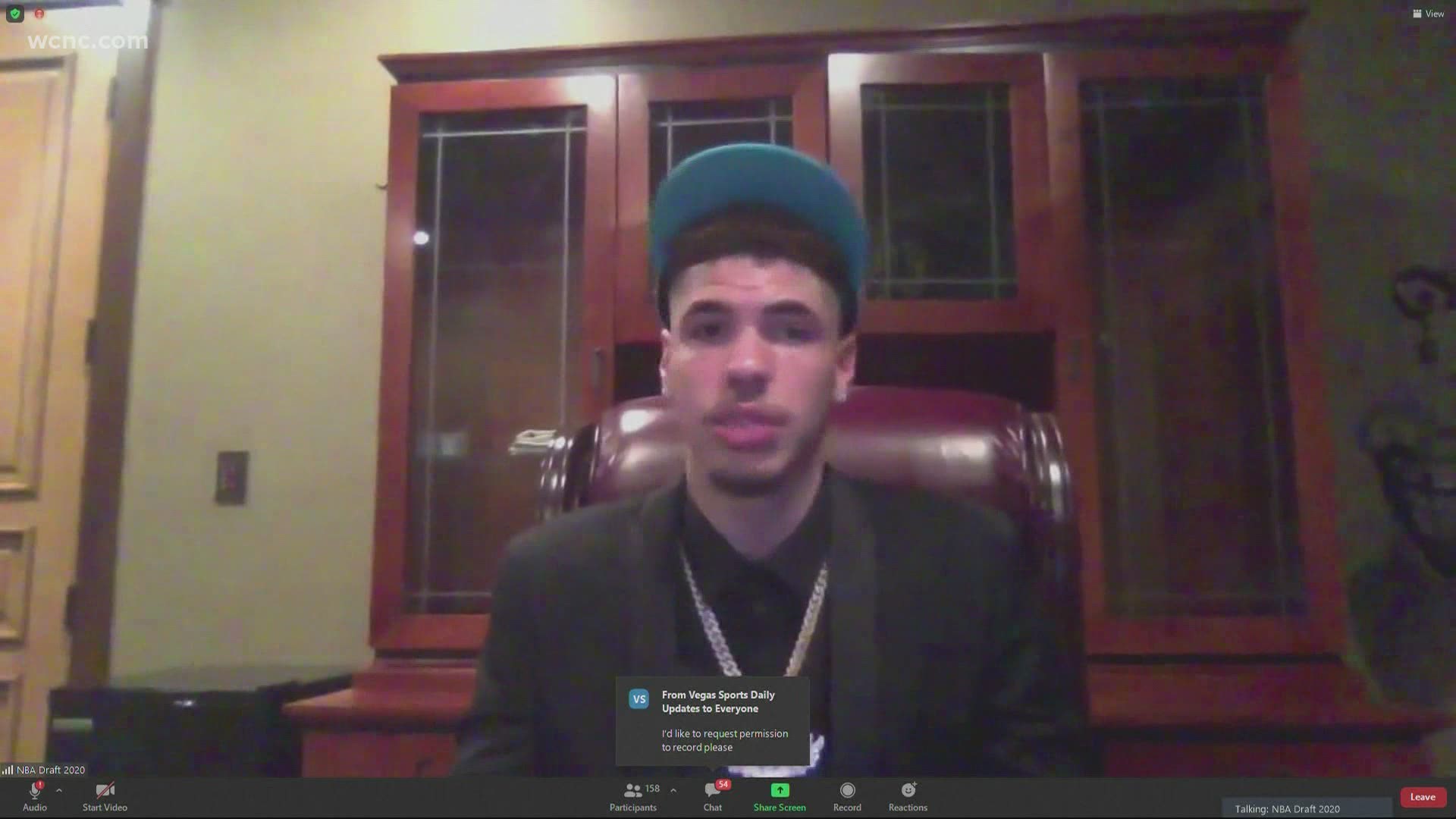 Fred VanVleet bet on himself. It paid off.

Gordon Hayward, meanwhile, is heading to a new home.

VanVleet agreed Saturday to a four-year, $85 million contract to remain with the Toronto Raptors, a person with direct knowledge of the discussions told The Associated Press on condition of anonymity because the contract remains unsigned. The fourth year of the contract is at VanVleet’s option.

The Charlotte Hornets have wanted Hayward for years. On Saturday, they finally landed him, according to Priority Sports, the agency that represents the veteran forward. A person with knowledge of the terms, speaking on condition of anonymity because the deal hadn’t been signed, told the AP that Hayward will sign a four-year contract worth $120 million. ESPN first reported the agreement between Hayward and the Hornets.

VanVleet, the undrafted guard from Wichita State, has played a huge role in the Raptors’ recent successes, most importantly their run to the 2019 NBA championship. He has set career bests in scoring by wide margins in each of the last three seasons, that number rising to 17.6 points per game this past season.

Keeping VanVleet was of major importance to the Raptors, who have won at least 50 games in each of the last five seasons — by far the longest current streak in the NBA. Milwaukee has a two-year such streak, and the reigning NBA champion Los Angeles Lakers reached the 50-win mark last season.

It also fulfilled a VanVleet prophecy: He famously went undrafted four years ago, then passed on some low-money deals that he figured wouldn’t pan into much.

“I turned those down. I bet on myself,” VanVleet told friends and family on what would have been his draft night, a festive occasion that turned disappointing when the call from the NBA never came.

On Saturday, he tweeted his reaction: a retweet of himself saying “Bet on yourself" in 2016, with three moneybag emojis now attached.

The Raptors brought him in on a summer-league deal, then a minimum deal, then gave him a two-year contract for $18 million two years later — and now gave him the full reward.

Kyle Lowry, the veteran point guard and longtime leader of the Raptors, has predicted that VanVleet will take over that role one day. The deal agreed to on Saturday only cements that sort of thinking.

That’s no longer in doubt.

Free agency opened in the NBA on Friday evening and VanVleet was one of the top available names. The Lakers’ Anthony Davis remains unsigned though is expected to remain with the defending champions, and Hayward’s future was another of the top questions remaining in the league as Day 2 of free agency began Saturday.

Credit: AP
FILE - In this Jan. 4, 2020, file photo, Toronto Raptors guard Fred VanVleet looks to pass the ball during the first half of an NBA basketball game against the Brooklyn Nets in New York. VanVleet agreed Saturday, Nov. 21, 2020, to a four-year, $85 million contract to remain with the Toronto Raptors, a person with direct knowledge of the discussions told The Associated Press on condition of anonymity because the contract remains unsigned. (AP Photo/Mary Altaffer, File)

It was not a question for long.

Hayward turned down a $34 million option for this season with Boston, and the Celtics were in talks with other teams — including Indiana, which was believed to be a preference of Hayward’s — on potential sign-and-trade deals.

Instead, it appears the Celtics are seeing Hayward walk away as a free agent.

Hayward agreed to a four-year offer sheet worth about $63 million with the Hornets in 2014, a deal that was matched by the Utah Jazz — Hayward’s original team. Hayward left the Jazz for Boston in 2017, saw his first season with the Celtics end on opening night of the 2017-18 season when he suffered a horrible lower leg injury, then averaged 14.0 points per game over the following two seasons.

VanVleet’s deal was the second major development for the Raptors in two days. On Friday, the team announced that it would begin this season by calling Tampa, Florida, home because of travel issues related to the coronavirus pandemic — specifically the challenge of getting NBA teams over a U.S.-Canada border that is closed to nonessential travel.

In other matters Saturday:

Guard Rajon Rondo took to Instagram to post what appeared to be a farewell message to the Lakers, after he helped them win this past season's NBA title. He thanked the team's front office and coach Frank Vogel, among others.

Rondo agreed later Saturday to a two-year deal with the Hawks, a person with knowledge of the negotiations told AP.

Rondo became the latest addition in a busy two days of movement for Atlanta. The Hawks agreed with guard Kris Dunn earlier Saturday on a two-year contract worth $10 million, a second person told AP. And Atlanta also agreed Friday with Danilo Gallinari on a three-year contract.

Tristan Thompson agreed on a two-year, $19 million contract to join the Celtics — ending his nine-year stint with the Cleveland Cavaliers, a person with knowledge of the deal told the AP.

Thompson averaged 9.4 points and 8.7 rebounds in his nine seasons, a stint that obviously included playing a key part of helping Cleveland win its lone NBA championship in 2016. He leaves as the Cavaliers' No. 3 career rebounder and played in 447 consecutive games from 2012 through 2017.

Wesley Iwundu agreed on a two-year deal with the Mavericks, another low-key addition as the club tries to improve its athleticism and get a little tougher around young stars Luka Doncic and Kristaps Porzingis.

The 25-year-old Houston native spent his first three seasons in Orlando after the Magic drafted Iwundu early in the second round in 2017. He has career averages of 5.8 points and 2.5 rebounds.

Paul Millsap is staying with the Nuggets on a one-year deal that will be worth around $10 million, a person with knowledge told AP. The news of the forward's decision was first reported by The Athletic and The Denver Post.

The Heat agreed to a two-year deal starting at $5.9 million for this season with top defensive guard Avery Bradley, agent Charles Briscoe said.

Bradley has averaged 11.8 points in his career. He spent last season with the Lakers but did not accompany them to the NBA restart bubble at Walt Disney World. He averaged 8.6 points in 49 games, mostly starts, for the Lakers last season.

The second year of that deal is at the Heat option , just like the deals they struck Friday with returnees Goran Dragic and Meyers Leonard. That protects Miami's spending flexibility for the summer of 2021.

Moe Harkless, who was briefly — on paper, anyway — a member of the Heat in July 2019 before getting moved as part of the trade that brought Jimmy Butler to Miami, is now with the Heat and for real this time.

Harkless agreed to a $3.6 million contract, a person with knowledge told AP. For now, the Heat intend to use their biannual exception to land Harkless, who averaged 5.6 points in 62 games last season with the Los Angeles Clippers and New York.

Priority Sports announced that Bobby Portis, who averaged 10.1 points last season for New York, agreed to a deal with the Bucks. Later Saturday, a person with knowledge of the move told AP that Milwaukee and guard D.J. Augustin agreed on a three-year contract. ESPN said that deal was worth $21 million.

Michael Carter-Williams is returning to the Magic on a two-year contract, a person with knowledge of the matter told AP. The Athletic first reported that agreement. Carter-Williams averaged 7.2 points in 45 games off Orlando's bench last season.

Dwight Howard became the first announced free-agent signing of this offseason, completing his one-year, $2.6 million deal. He signed Saturday; players on certain kinds of contracts, like the veteran minimum one he agreed to Friday night, did not have to wait for the traditional signing period to begin Sunday.

Forward Jae Crowder, a big part of Miami's run last season to the NBA Finals, agreed on a three-year contract that will be worth nearly $30 million to join the Phoenix Suns, according to a person familiar with those negotiations.

Crowder became a starter last season for the Heat and averaged 12.0 points in Miami's playoff run. He becomes another key veteran addition to the Suns, who finished last season with an 8-0 run in the restart bubble at Disney and swung a trade earlier this month for All-Star point guard Chris Paul to play alongside All-Star shooting guard Devin Booker.

Carmelo Anthony is coming back for an 18th season, agreeing Saturday night on a one-year deal to remain with the Trail Blazers, a person with knowledge of the agreement confirmed to AP.

Portland gave Anthony an opportunity to extend his career last season and he rewarded the Blazers by starting all 58 of his appearances and averaging 15.4 points.