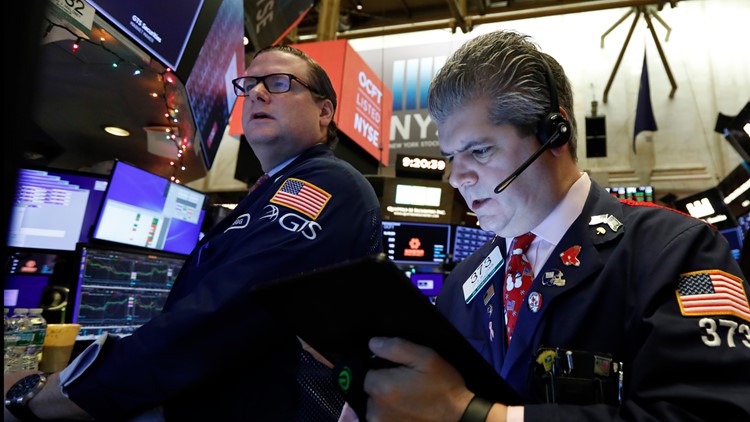 Nasdaq goes above 9,000 for the first time as US stocks close in on record highs

WASHINGTON — Stocks were broadly higher Thursday afternoon, pushing the major indexes further into record territory the day after Christmas, as investors returned after the holiday. Amazon (AMZN) was the most traded stock in the Nasdaq Composite index.

Technology stocks have accounted for a big cut of the gains in the market, which helped to push the Nasdaq composite above the 9,000 mark for the first time. The index rose 0.7 percent Thursday afternoon and has gained over 35 percent, which as CNN reports, put it on the path to making 2019 the index's best year since 2013. Nasdaq reports that we would have to go back to 1995 to find a better year, performance wise. And some optimistic news too, as the index says, history shows that these great gains don't necessarily mean we will see a "drop back" next year.

FILE - In this July 27, 2018 file photo, the logo for Amazon is displayed on a screen at the Nasdaq MarketSite in New York.
AP Photo/Richard Drew, File

Tech companies and retailers like Amazon are up, following data which showed a last-minute surge in online shopping has helped holiday sales.

The gains have the major indexes on track for more record highs. The S&P 500 was up 0.3 percent as of 1:52 p.m. Eastern time. The Dow Jones Industrial Average rose 0.2 percent, while the Nasdaq composite added 0.6 percent. The Russell 2000 index of smaller company stocks slipped 0.1 percent at one point Thursday afternoon.

Trade optimism has increased prices and we are also seeing an increase in the demand for oil, which has bumped up the outlook on global markets. US oil prices have risen to a three-month high.