G-7 grapples with Afghanistan, an afterthought not long ago

The meeting comes amid widespread unhappiness among some of the U.S. closest allies about Biden’s handling of Afghanistan. 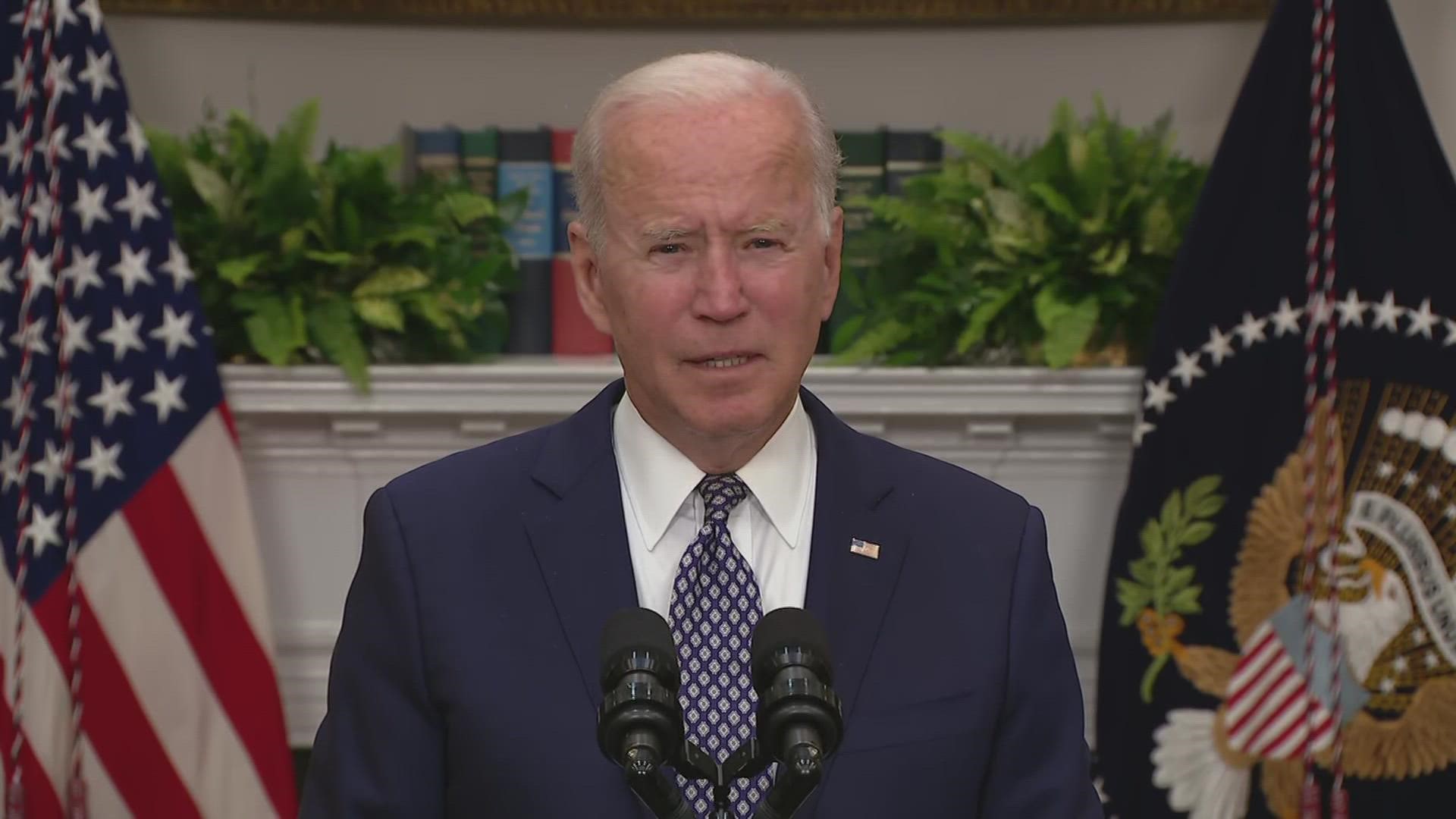 WASHINGTON — President Joe Biden and fellow Group of 7 leaders met virtually Tuesday as some of the major industrialized democracies were pressing the United States to extend its military presence in Afghanistan beyond the Aug. 31 evacuation deadline.

The meeting, hosted by British Prime Minister Boris Johnson, comes amid widespread unhappiness among some of America's closest allies about Biden’s handling of the Afghanistan withdrawal. Complaints have come from Britain, France, Germany and others in the G-7, which includes only one non-NATO member, Japan.

Ahead of the meeting, British defense secretary Ben Wallace said he was doubtful that Biden would agree to extend the deadline. Taliban spokesman Zabihullah Mujahid on Tuesday said his group would accept “no extensions” to the deadline.

“I wish we had more time. I think at the moment it is unlikely,” Wallace told BBC News. “We have to plan on 31 August being the last moment. Every day we get after that would be a big bonus."

Biden addressed the leaders for several minutes near the start of the meeting that lasted less than an hour, according to the White House. He was expected to deliver public remarks on Afghanistan later in the day.

In Afghanistan, meanwhile, as desperate evacuees continued to be transported out of the country, CIA Director William Burns visited Kabul on Monday to meet with Abdul Ghani Baradar, the Taliban’s top political leader, according to a U.S. official familiar with the matter.

The Washington Post first reported Burns’ meeting with Baradar. A U.S. official confirmed the report on condition of anonymity because they were not authorized to speak publicly.

The lawmakers who head the G-7 nations’ foreign affairs committees urged leaders in a letter on Tuesday to “avoid arbitrary dates for ending military support to the evacuation.”

Johnson and others, including French President Emmanuel Macron, are pushing Biden to extend his self-imposed Aug. 31 deadline for the total withdrawal of U.S. forces in order to ensure the evacuation of all foreign nationals as well as Afghans who worked for or supported the American-led NATO operation that vanquished the Taliban in 2001 and has now accepted defeat.

Wallace said the 1,000 British troops at Kabul's airport would be unable to keep up the operation when the much larger American contingent leaves.

U.S. and European officials are also increasingly concerned about Islamic State militants targeting their troops and Afghan civilians near the chaotic scene outside Kabul's international airport.

“We have signals both from American sources as well as our own assessment, that there's an increase" of Islamic State suicide bombers slipping into the city, he said.

“And that is the biggest threat, which we have already received signals about from the Americans at the start of the week,” Zorn added. “That’s increasing and leads to heightened precautions.”

Germany’s defense minister, Annegret Kramp-Karrenbauer, said she takes seriously the Taliban threat not to allow any foreign troops to remain beyond Aug. 31.

Credit: AP
In this handout photo provided by the Ministry of Defence, members of the UK Armed Forces taking part in the evacuation of entitled personnel from Kabul airport in Afghanistan, Friday, Aug. 20, 2021. (LPhot Ben Shread/Ministry of Defence via AP)

“I think one needs to take very, very seriously the announcement that they (the Taliban) won’t agree to a further delay,” she said, but added that the threat could also be an attempt by the group to “drive up the price” in negotiations with foreign officials.

Leslie Vinjamuri, director of the U.S. and the Americas program at the Chatham House think tank, said that as the G-7 nations struggle to find unity, their power to influence events in Afghanistan is limited.

She said the looming deadline put Biden “in a very difficult position politically.”

Despite Biden’s April announcement that the U.S. would completely withdraw from Afghanistan by the 20th anniversary of the Sept. 11, 2001, attacks, the nation was almost an afterthought when the G-7 leaders met in June. COVID-19, China and climate change dominated the agenda. And expectations for Biden’s impending summit with Russian President Vladimir Putin were at the top of people’s tongues.

The leaders put Afghanistan as number 57 out of 70 points in their final 25-page communique -– behind Ukraine, Belarus and Ethiopia. Afghanistan didn’t even feature in the one-and-a-half page summary of the document. NATO had already signed off on the U.S. withdrawal and all that appeared to be left was the completion of an orderly withdrawal and hopes for a peace deal between the Afghan government and Taliban.

“We call on all Afghan parties to reduce violence and agree on steps that enable the successful implementation of a permanent and comprehensive ceasefire and to engage fully with the peace process. In Afghanistan, a sustainable, inclusive political settlement is the only way to achieve a just and durable peace that benefits all Afghans,” the leaders said, without a hint of urgency.

On the eve of Tuesday's meeting, the White House said Biden and Johnson had spoken by phone and discussed “the importance of close coordination with allies and partners in managing the current situation and forging a common approach to Afghanistan policy.”

Johnson's office said the two leaders “agreed to continue working together to ensure those who are eligible to leave are able to, including after the initial phase of the evacuation has ended.”

Biden administration officials have refused to be pinned down about whether an extension is likely or even possible given the Taliban’s demand that all U.S. forces leave by the Aug. 31 deadline.

White House aides said in advance the meeting could be contentious, as U.S. allies have looked on with disapproval at the tumultuous American drawdown.

Senior British military officers have expressed anger over the U.S. pullout, saying it exposes the hollowness of the trans-Atlantic “special relationship” — a phrase used since World War II to stress the bonds of history, friendship and shared diplomatic interests between London and Washington.

German Foreign Minister Heiko Maas said the majority of local staff who worked for his country in Afghanistan haven’t yet been gotten out and called Tuesday’s G-7 meeting “very important” for discussing international access to the Kabul airport beyond Aug. 31.