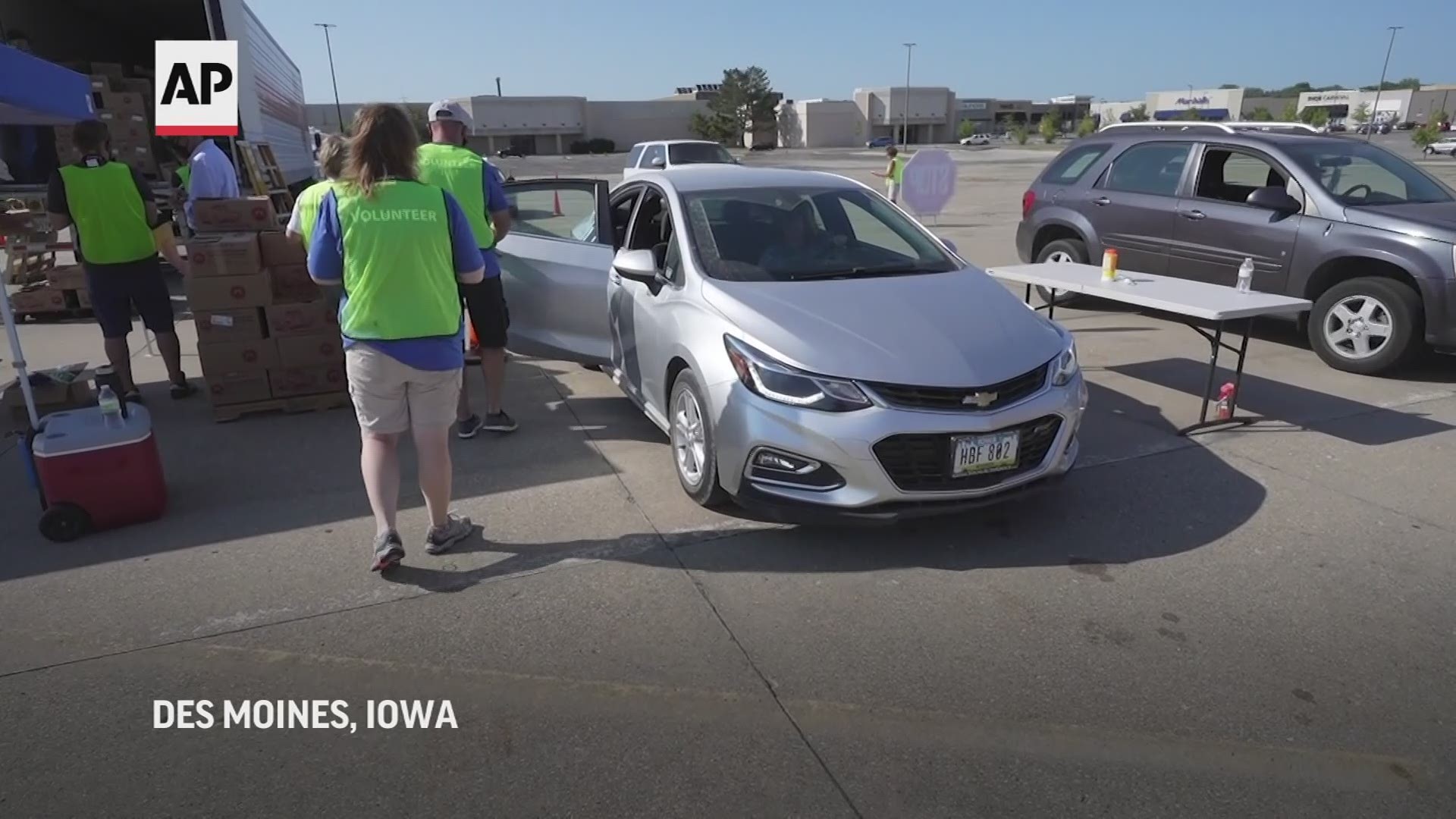 DES MOINES, Iowa — As she inched ahead in her rusty Chevy pickup, Brianna Lordz bemoaned that engine problems had prevented her from making it to the last few drive-up produce giveaways organized by a Des Moines food pantry.

But Lordz managed to coax her old truck to a former Sears parking lot, where she waited behind dozens of other vehicles spread across four lanes and lined up at a semi-trailer stocked with 20-pound boxes of cabbage, onions, peppers, carrots and other veggies provided by the federal government. The giveaways are a godsend, she said, at a time when the coronavirus pandemic has caused jobs to dry up and grocery prices to soar.

“This is amazing. This is something the government did, and let's talk about taking care of the people," she said. “Everything about the COVID-19, it's just a bad thing but you can't blame nobody for it."

Across the country, people like Lordz have picked up roughly 75 million food boxes this summer through the program overseen by the U.S. Department of Agriculture. The effort began in the spring when efforts to slow the spread of the coronavirus caused food demand at restaurants and schools to plunge. That left farmers with little choice but to dispose of produce, meat and dairy products even as millions of people desperately turned to help from overwhelmed food banks.

The Farmers to Families Food Box Program was intended to help farmers, distributors and people who had lost their jobs. After a few hiccups, it has largely succeeded. The USDA recently added another $1 billion to the program this fall after already spending roughly $2.5 billion.

RELATED: Lessen food waste and save money | Your Best Life

RELATED: US to buy $3B in dairy, meat, produce from farmers, Trump tweets

Anti-hunger advocates say that while they appreciate the delivery of fresh, high-quality food, many more people could be helped if the federal government would increase spending on the Supplemental Nutrition Assistance Program, or SNAP. Democrats in Congress have been seeking a 15% increase in funding for SNAP, the federal government's main anti-hunger program, which lets people buy food at grocery stores and provides an estimated nine meals for each one offered by the nation's food banks.

Credit: AP
Volunteers load a pallet during a drive-up produce giveaway organized by a Des Moines food pantry, Friday, Aug. 28, 2020, in Des Moines, Iowa. Across the country, people have picked up roughly 75 million food boxes this summer through the Farmers to Families Food Box Program overseen by the U.S. Department of Agriculture. The effort began in the spring when efforts to slow the spread of the coronavirus caused food demand at restaurants and schools to plunge, leaving farmers with little choice but to dispose of produce, meat and dairy products even as millions of people desperately turned to help from overwhelmed food banks. (AP Photo/Charlie Neibergall)

So far, proposals to increase SNAP have failed, leaving food bank leaders cautioning that there is a limit to how many people they can help. They warn of problems ahead now that a $600 weekly federal jobless payment has expired and many states haven’t approved even $300 in extra payments. Across the country, more than 14.5 million people are collecting unemployment benefits, compared to 1.7 million a year ago.

RELATED: US jobless claims fall to 881,000, lowest since March before pandemic began

“Everyone sees we're meeting the need and thinks maybe we don't have to come up with these other solutions, the nonprofit sector will take care of it," said Mutt Unger, CEO of the Des Moines Area Religious Council, which operates 14 pantries and mobile operations. “But that's not what we're meant to be. We're not supposed to be here in place of solving problems. We're a stopgap measure."

Feeding America, a Chicago-based network of more than 200 food banks, expects a 10 billion pound gap between demand and supply of food this year, made worse by the decline in unemployment benefits. That's about double the gap the organization saw last year.

“Increasing SNAP benefits is just the most efficient way we can make sure people have the food they need and reduce demand at food banks," said Kate Leone, Feeding America's chief government relations officer. “That kind of intervention is the only way to bend the demand curve down in a meaningful way."

Despite those concerns, officials at food banks said the federal food box program has undoubtedly helped.

Brian Barks, CEO of the Food Bank of the Heartland in Omaha, Nebraska, said at times this summer, his food bank was giving away nearly twice as much food as normal, and the food box program accounted for roughly 20% of its supply.

“It’s been awesome,” Barks said. “The amount we have been receiving has been very, very helpful.”

“We’re very thankful the boxes came when they did because we needed the extra food support,” Espinosa said.

The federal food box program initially faced questions because some of the companies that won contracts weren’t food distributors and the contracts didn’t always cover the final delivery costs that food banks incurred.

Despite coming together quickly, Greg Ibach, the USDA under secretary overseeing the effort, said its contractors “delivered all or above 90% of the boxes that they had proposed to deliver.”

Although food banks had to absorb the cost of delivering the prepackaged food boxes the program provided, they were able to use money they would have spent buying the produce and other products.

“It was a bit of a scramble to get it going and get it out. But we were definitely very happy to have it, and we made it all work in the end,” said Rachelle Mesheau with the Redwood Empire Food Bank in northern California.

The USDA is tweaking the program in the third round of bidding to try to address some of the concerns that have been raised.

“The USDA definitely learned a lot from phase one and phase two, so in phase three they are really tightening up some aspects of it,” said Robin Safley with Feeding Florida food banks.

The new contracts will put greater emphasis on accountability and ensuring food boxes are delivered to underserved rural areas. For example, the West Texas Food Bank in Odessa didn’t receive any food boxes during the first two rounds of contracts because no distributors nearby won contracts.

Michelle Book, CEO of the Food Bank of Iowa, welcomed the program but hopes for more distributors. “We would take more if we could get more.”