Pentagon officials expressed confidence the airlift can get all Americans out by next Tuesday, the deadline Biden had set long before the Taliban takeover. 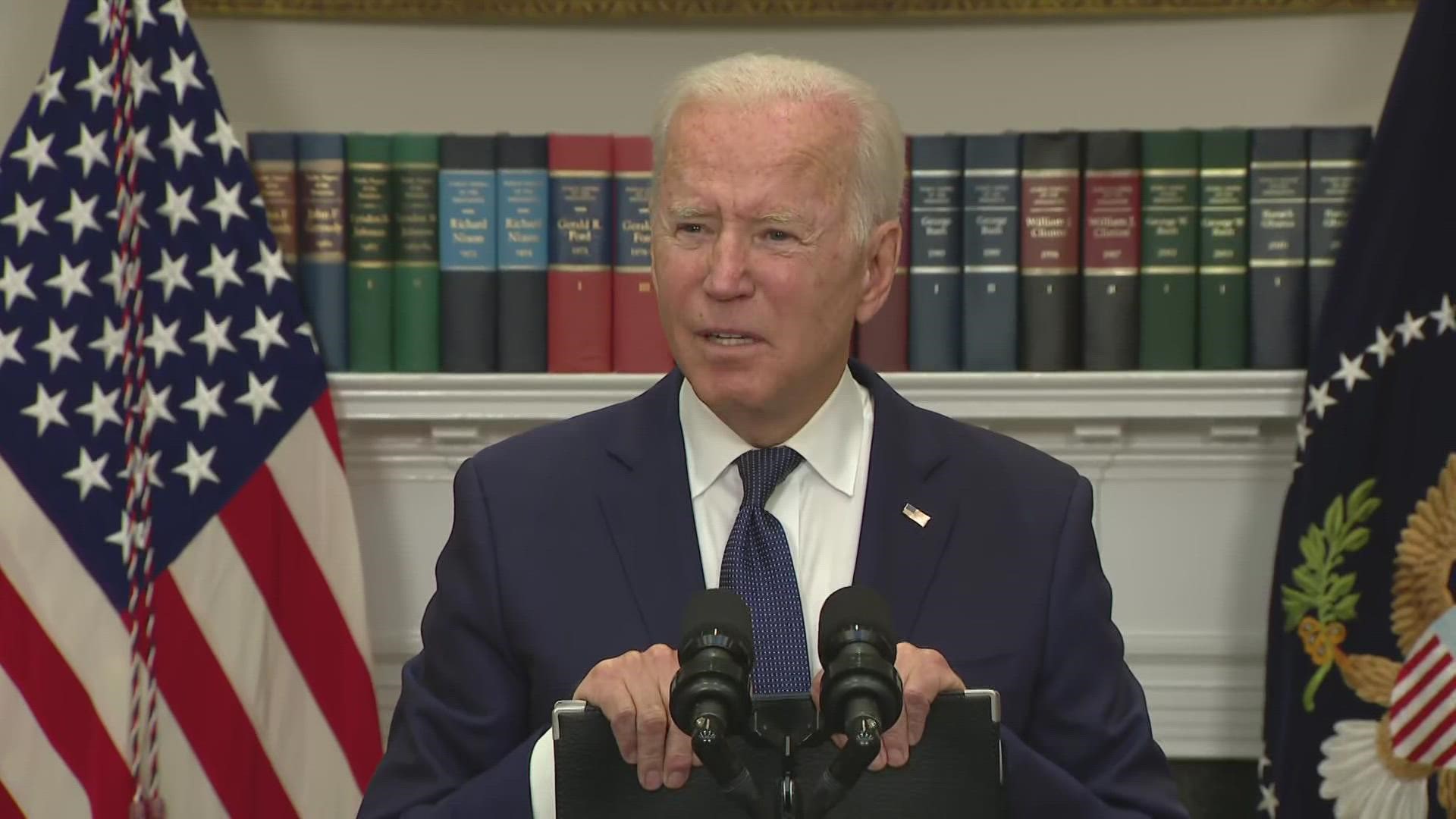 WASHINGTON — President Joe Biden declared Tuesday he is sticking to his Aug. 31 deadline for completing a risky airlift of Americans, endangered Afghans and others seeking to escape Taliban-controlled Afghanistan. The decision defies allied leaders who want to give the evacuation more time, and opens Biden to criticism that he caved to Taliban deadline demands.

“Every day we’re on the ground is another day that we know ISIS-K is seeking to target the airport and attack both us and allied forces and innocent civilians,” Biden said at the White House, referring to the Islamic State group's Afghanistan affiliate, which is known for staging suicide attacks on civilians.

He said the Taliban are cooperating and security is holding despite a number of violent incidents. “But it’s a tenuous situation,” he said, adding, “We run a serious risk of it breaking down as time goes on.”

The United States in recent days has ramped up its airlift amid new reports of rights abuses that fuel concern about the fate of thousands of people who fear retribution from the Taliban and are trying to flee the country.

Biden said he had asked the Pentagon and State Department for evacuation contingency plans that would adjust the timeline for full withdrawal should that become necessary.

Pentagon officials expressed confidence the airlift can get all Americans out by next Tuesday, the deadline Biden had set long before the Taliban completed their takeover. But unknown thousands of other foreign nationals remain in Afghanistan and are struggling to get out.

The Taliban, who have wrested control of the country back nearly 20 years after being ousted in a U.S.-led invasion after the 9/11 attacks, insist the airlift must end on Aug. 31. Any decision by Biden to stay longer could reignite a war between the militants and the approximately 5,800 American troops who are executing the airlift at Kabul airport.

In Kabul, Taliban spokesman Zabihullah Mujahid told a news conference the U.S. must stick to its self-imposed deadline, saying “after that we won’t let Afghans be taken out” on evacuation flights. He also said the Taliban would bar Afghans from accessing roads to the airport, while allowing foreigners to pass in order to prevent large crowds from massing.

In Washington, White House press secretary Jen Psaki said Biden, whose handling of the hastily arranged evacuation has been roundly criticized by Republicans and Democrats alike, announced during a meeting of fellow leaders of the G-7 industrialized nations that he planned to stick to the Aug. 31 deadline. British, French and other officials argued for extending the deadline, officials said.

At the Pentagon, spokesman John Kirby said Aug. 31 leaves enough time to get all Americans out, but he was less specific about completing the evacuation of all at-risk Afghans. He said about 4,000 American passport holders and their family members had been evacuated from Kabul as of Tuesday.

“We expect that number to grow in coming days,” Kirby said. He also said the military would have to start moving troops and their equipment out of Kabul several days prior to Aug. 31 in order to be out entirely by then.

It's unclear how many Americans who want to leave are still in the country, but their status is a hot political topic for Biden. Some Republicans bristled Tuesday at the U.S. seeming to comply with a Taliban edict. “We need to have the top priority to tell the Taliban that we’re going to get all of our people out, regardless of what timeline was initially set,” said Rep. Steve Scalise of Louisiana.

And Democratic Rep. Adam Schiff of California, chairman of the House Intelligence Committee, told reporters Monday that “it was hard for me to imagine” wrapping up the airlifts by the end of the month.

Biden decided in April that he was ending the U.S. war, which began in October 2001. Former President Donald Trump had earlier agreed in negotiations with the Taliban to end the war in May.

However, Biden waited until the Taliban had swept to power this month, following the collapse of the U.S.-backed government and its army, to begin executing an airlift.

Tragic scenes at the airport have transfixed the world. Afghans poured onto the tarmac last week and some clung to a U.S. military transport plane as it took off, later plunging to their deaths. At least seven people died that day, and another seven died Sunday in a panicked stampede. An Afghan solider was killed Monday in a gunfight.

British Prime Minister Boris Johnson said the Group of Seven nations will not recognize a Taliban government unless it guarantees people can leave the country if they wish, both before and after the August deadline. A day earlier, the director of the U.S. Central Intelligence Agency, William Burns, met with a top Taliban leader in Kabul. The extraordinary meeting reflected the gravity of the crisis and America's need to coordinate with a Taliban group it has accused of gross human rights abuses.

For now, the U.S. military coordinates all air traffic in and out of the Kabul airport, but the Taliban will take over there after the planned U.S. pullout, Mujahid said. It's unclear when commercial flights might resume, putting pressure on the current evacuation efforts to get as many people out as possible.

About 21,600 people were flown out in the 24-hour period that ended early Tuesday, the White House said — reflecting a significant increase as the airlift accelerates.

Meanwhile, a U.S. official said Burns, the CIA director, met with Taliban leader Mullah Abdul Ghani Baradar — an extraordinary moment for the U.S. spy agency, which for two decades targeted the Taliban in paramilitary operations. It was not clear what exactly they discussed.

The CIA partnered with Pakistani forces to arrest Baradar in 2010, and he spent eight years in a Pakistani prison before the Trump administration persuaded Pakistan to release him in 2018 ahead of U.S. peace talks with the Taliban.

Mujahid, meanwhile, pushed back on the idea that Afghans need to flee, arguing that the Taliban have brought peace and security to the country. He said the main problem was the chaos at the airport, and he accused the U.S. of luring away engineers, doctors and other professionals on which the country relies.

Earlier, U.N. human rights chief Michelle Bachelet said she had credible reports of “summary executions” of civilians and former security forces who were no longer fighting, the recruitment of child soldiers and restrictions on the rights of women to move around freely and of girls to go to school.

She did not specify the timing or source of her reports.

It has been difficult to determine how widespread abuses might be and whether they contradict the Taliban’s public statements or reflect disunity in its ranks.

From 1996 until the 2001 U.S.-led invasion, the Taliban largely confined women to their homes, banned television and music, chopped off the hands of suspected thieves and held public executions.