Doctors say, while Multi-System Inflammatory Syndrome (MIS-C) only appears in about 2% of children, infected with COVID, parents should take it very serious. GRAND RAPIDS, Mich. — The rise in pediatric COVID cases has many doctors concerned about an often related, and equally dangerous illness Multi-System Inflammatory Syndrome in children, also known as MIS-C. Health officials are still learning about the disease, but know it can severely impact children's internal organs.

Dr. Rosemary Olivero, Helen DeVos Children's Hospital, a division chief and pediatric infectious diseases physician at Helen DeVos Children's Hospital, describes MIS-C as a post-infectious inflammatory syndrome, and says "for the vast majority of patients, it means they've had COVID, and after having it for several days or after actually having completely recovered from it, they start to have symptoms of the inflammatory syndrome."

According to the Centers for Disease Control and Prevention, MIS-C is a condition that causes inflammation in different parts of the body, including the heart, lungs, kidneys, brain, skin, eyes, or gastrointestinal organs. The medical and scientific community is not, yet, certain what causes MIS-C. However, many children with MIS-C had the virus that causes COVID-19, or had been around someone with COVID-19.

"When we saw our last surge of COVID-19, in all populations, in late October into November and December of 2020, we also saw a very large up-tick, a few weeks later, in our MIS-C cases," says Olivero.  "We generally see patients develop MIS-C anywhere from two to eight weeks after their COVID-19 infection. So as we're seeing more and more cases of COVID in young people, we fear that we will see more cases of MIS-C at Helen DeVos Children's Hospital. So, we're very prepared for that possibility." "So if your child has those symptoms, even if you don't know that they actually had COVID-19, it is worthwhile to have your child assessed," says Olivero. "There have been several cases where the family didn't even know their child was sick at all, and they still had been exposed to the virus. They'd had an infection, but they had such mild symptoms, they never got tested. Then, they ended up developing MIS-C. So, as we know that COVID is so common in the state of Michigan right now, even if your child wasn't diagnosed with COVID-19, if they have those symptoms, it is worthwhile to have them assess for possible MIS-C."

16-year-old Macy Langley, of Frankfort, is among the dozens of Michigan children who have contracted the rare illness, that has killed at least five children in the state.  Langley was admitted to the pediatric ICU, at DeVos children's hospital, after battling fever, severe pain and respiratory problems for weeks, at home.

"They were having a hard time pinpointing what was wrong or to getting the actual diagnosis because her symptoms were all over the place," says Tina Langley, Macy's mother. "As a matter of fact, for the first two weeks, we were seeing doctors and going to urgent care and our primary care. They were doing other diagnostic testing, but she wasn't even tested for COVID. She had belly pain and she had a fever. They were thinking it was, perhaps, you know something digestive. It was two weeks of blood tests, CAT scans, and we did some X-rays. They were doing testing, other than for MIS-C or COVID, because she didn't have any respiratory symptoms at firs. So, it was, you know, disguised as something else; or, they were perceiving it to be something else."

"I'd heard of it like maybe once or twice on the news, back in September, but then really didn't hear about it (MIS-C) again. So, I was a bit confused on do they know how to treat it. Do they know what's going on?" said Macy. "I was pretty miserable, to say the least."

RELATED: Doctor explains why COVID cases are on the rise among children

RELATED: Most kids with serious inflammatory illness had mild COVID-19

Macy's condition progressively worsened until the family was forced to have her take the two and a half hour ambulance ride to DeVos Children's Hospital.

"She was immediately admitted to the pediatric ICU. They started with the IBG interactive IV treatments. They gave her some heavy, heavy duty steroids. They gave her some immune system suppressants, so that it would, you know, stop attacking her internal organs. Her lungs, I think, were the immediate factor at that point. She was put on a BiPAP, for a week in the pediatric ICU. It's very hard for me to talk about it," Tina said, holding back tears as she relived the harrowing ordeal.  "I mean we were going hour by hour, just praying not to be on the ventilator. And, that's what it was. I mean we were every hour that we got through and she couldn't maintain her oxygen at 85, meant we were off the ventilator. And, that's just what we went through for the first probably five days. I mean it was, it, very hard."

It took two more weeks before Macy was well enough to leave the hospital. During that time, her father was, also, in and out of the hospital battling COVID-19.

"So him being in the hospital up here and her in the pediatric ICU, it was a long couple of weeks," recalls Tina.

The family may have survived that nightmare, but the diagnosis means Macy will need to follow up with specialist for the foreseeable future.

"Unfortunately we don't yet know what the long term consequences of MIS-C on the body are. We think that the vast majority of those inflammatory changes are completely reversible. But, what we don't know is what will the effect be on the heart," says Dr. Olivero. "Why it's such a concerning illness to have, is that the inflammatory process can affect any organ in the body, but most importantly, it can directly affect the heart in two different ways. It can affect the muscle that makes up the ventricle that pumps blood out to the rest of the body, and that muscle gets affected to the point that it doesn't beat quite as effectively, so it can't pump out what to  the rest of the body as efficiently. So the blood pressure can be depressed and you have impaired blood flow. So that's one side of it. The other side is that the inflammatory process can affect the coronary arteries that supply blood to the rest of the heart muscle. And with MIS-C, we can see that those blood vessels can become dilated." She says with treatment, the vast majority of that dilation shrinks back to normal size. However, there may be long-term inflammatory damage to the vessels that supply blood to the heart.

"And, that's really important because the health of the coronary arteries really determines long-term cardiovascular health, and the risk for things like heart attacks. So, we don't know yet what the outcome will be, but at the at the moment we're planning on children who are diagnosed with MIS-C being followed with cardiology through all of childhood and adolescence as well," she said.

Olivero says while Multi-System Inflammatory Syndrome in children (MIS-C) only appears in about 2% of children who have been infected with COVID-19, it is very serious and parents should act quickly, if there is even the slightest chance their children could have it.

“I think it's still is very important to keep in mind, as we're trying to combat this pandemic, this is one of many very important consequences of COVID-19," says Olivero. "With acute respiratory COVID, in general, we would think is going to affect our children with chronic medical conditions more than our healthy children. But, our young healthy children seem to be the ones who get MIS-C."

The CDC offers the following recommendations for parents:

Contact your child's doctor, nurse, or clinic right away if your child is showing symptoms of MIS-C:

Seek emergency care right away if your child is showing any of these emergency warning signs of MIS-C or other concerning signs: 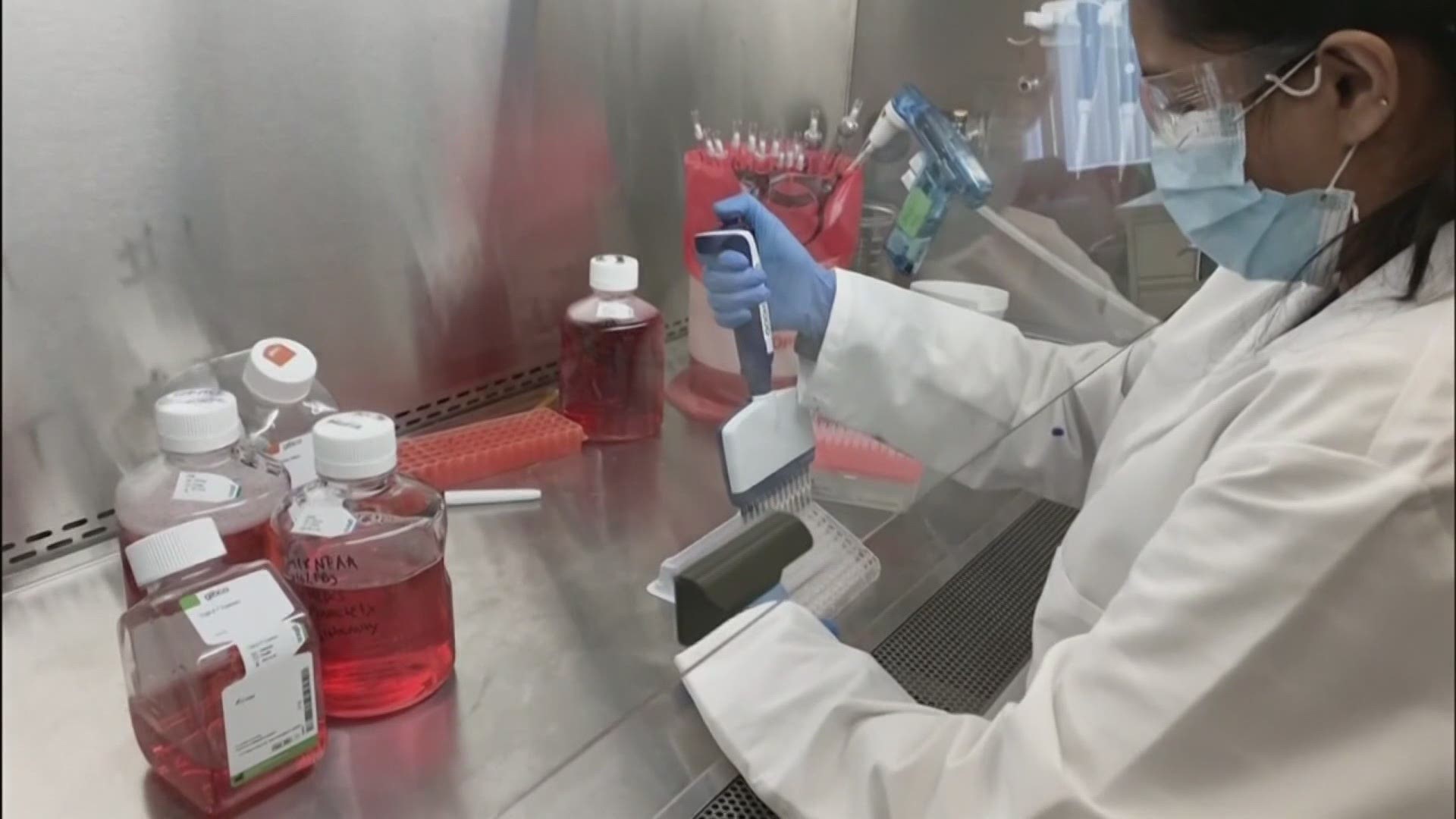