Tuesday marked the fourth day of protests in Northwest Ohio. 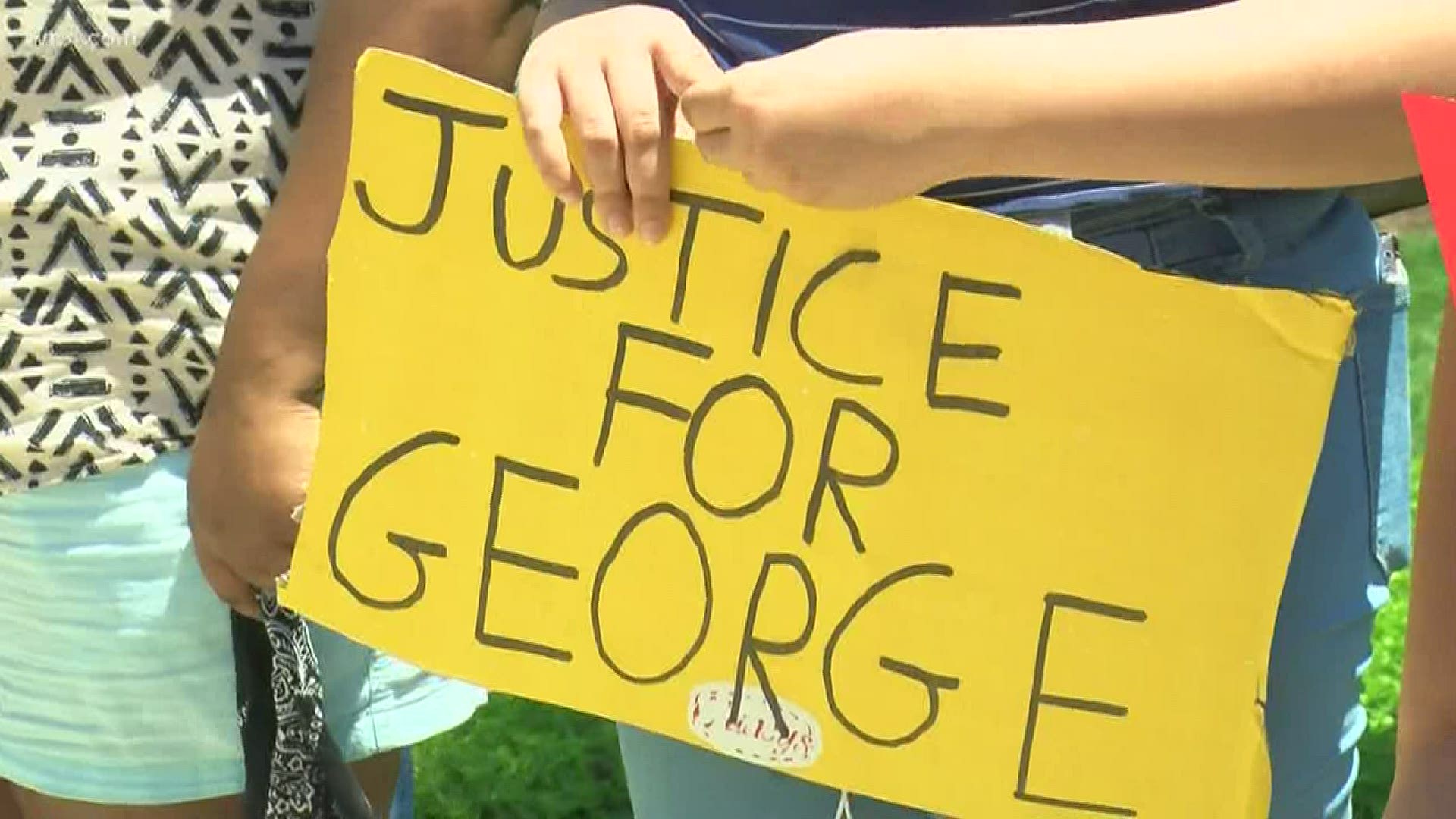 TOLEDO, Ohio — Toledoans continue to protest on the streets in response to the death of George Floyd. They're calling for an end to police brutality and racism against African Americans.

Tuesday marked the fourth day of protests in Northwest Ohio.

Mariah Coleman, 21, is a University of Toledo student. She and eight of her friends, some of which are UT students as well, organized a protest Tuesday on Secor Road and Dorr Street nearby the university's campus. Previous local protests inspired them to form one of their own.

"I don't personally hate police officers. It's just that in the situation as being an authority and not an authority, you have to realize that we fear for our lives, cause it's your word against ours. We don't have your trust and you don't have our trust," Coleman said.

Chief George Kral of the Toledo Police Department briefly marched with protesters Monday night during a different protest which Coleman and some her friends attended.

Coleman had a chance to exchange words with the Chief; the Chief even hugged her at one point.

"I think he understands that we're not going to be silent about this no more. Especially the younger generation. We are very outspoken and very outgoing," she said.

The chief said that he will meet with Coleman and other protesters in 30 days to discuss improving relations between police and the black community; to the dismay of some.

"We should've had that conversation now," said Zakiya Hatten, another organizer of the protest. Hatten believes the chief marched with protesters to merely 'save face,' and she disagrees with how Saturday's protest in downtown was handled by the police.

Until then, Coleman said that she and others will protest every day.

Kral, alongside Toledo Mayor Wade Kapszukiewicz, did address Toledoans on Monday afternoon in regard to Saturday's protest in downtown that turned violent.

While Kapszukiewicz said he believed Toledo did "pretty well"  in comparison to the level of violence seen in other areas, he said he received reports of police misconduct. He then asked citizens to help city leaders understand what unfolded, as tensions began to rise only an hour after the protest had begun.

If you have concerns from Saturday, send an e-mail to TPDconcerns@toledo.oh.gov. Residents can also go to the Engage Toledo app to share what they saw.

Additionally, a number of new measures were announced:

The appearance Monday was the first for Kral since the protests occurred, and Kapszukiewicz noted he was not available earlier for comment since he was on the front lines, at times wearing a gas mask.

"I want to start by reiterating what I said last week regarding the murder of George Floyd. In my opinion, it was a murder. It was unjust and unnecessary and does not reflect policing in this country," Kral said. "I hope the officers get the harshest penalty coming to them."

"We had a challenging weekend in Toledo. I want to compare Saturday to Sunday. On Sunday, there was a march that started at the mall, traffic was blocked off, people laid down in the street. Technically, that is illegal. But we let them do what they do and we protect their first amendment freedoms. No rocks were thrown, they got their message across and they left and so did we.

"We'll talk about Saturday. Again there were a couple of protests that were peaceful. Once that initial 3 p.m. protest broke up at 4, they went in separate directions, and that's when things started going south. A police vehicle was damaged and vandalized and we had to utilize pepperballs and mace to get the officers to safety," the chief said.

"I'm not going to apologize, it's my job to protect life and property. I promise you, if the protesters just yelled at us and called us names, we would have sat there and taken it. But the minute bottles, rocks projectiles, fireworks get thrown, we have to take action.

"I watched an Ohio State Highway Patrol trooper get hit right in the head by a metal canister. Councilman Sykes was there and he turned around and said, 'Chief give me five minutes.' He got the crowd back. Fifteen to 20 minutes later, there were bottles, rocks. M-80s and explosion on the lawn of the safety building. At that point, we decided to push the crowd south out of downtown with pepperball. And that's when the damage downtown started," Kral said.