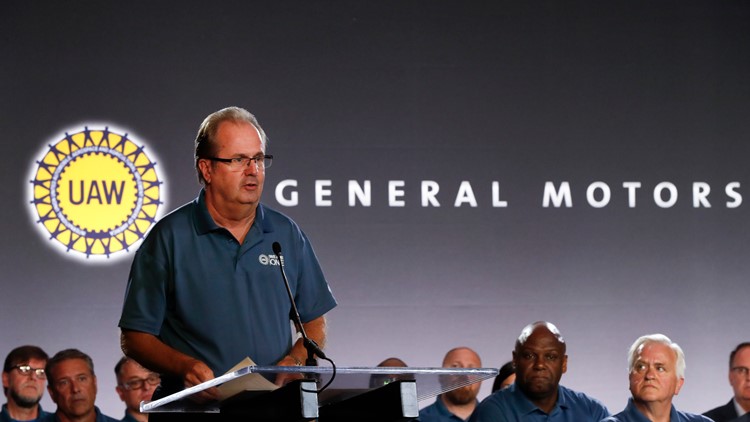 Photo by: AP
FILE - In this July 16, 2019, file photo United Auto Workers President Gary Jones speaks during the opening of their contract talks with General Motors in Detroit. A strike against General Motors looms large with just over a day left until the United Auto Workers’ national contracts with the three Detroit automakers expire. The union’s national agreements with GM, Ford and Fiat Chrysler end at 11:59 p.m. Saturday, Sept. 14. (AP Photo/Paul Sancya, File)

The UAW says its contract negotiations with General Motors have broken down and its roughly 49,000 members will go on strike just before midnight.
Author: Associated Press
Published: 11:22 AM EDT September 15, 2019
Updated: 5:41 AM EDT September 16, 2019

DETROIT — The Latest on labor strike at General Motors factories (all times local):

United Auto Workers says contract talks with General Motors will resume Monday morning, but the threat of a strike remains.

Union officials say both sides are far apart in the talks, while GM says it has made significant offers.

UAW represents workers at 33 manufacturing sites and 22 parts warehouses across the country.

RELATED: Union votes to strike at General Motors' US plants

RELATED: 2K GM workers in NW Ohio could be impacted by impending strike

GM's 49,200 UAW members are scheduled to go on strike at 11:59 p.m. unless an agreement is reached on a new four-year contract. But UAW spokesman Brian Rothenberg says both sides are so far apart that he expects to go on strike.

GM says it has made substantial offers, but union officials say they're far apart on wages, health care, use of temporary workers and other major items.

A person briefed on the bargaining says General Motors has offered the United Auto Workers to make new products at two assembly plants it had planned to close.

The person says the company offered to build a new all-electric pickup truck at a factory in Detroit that is slated to close next year. The plant in Lordstown, Ohio, which already has stopped making cars, would become a battery manufacturing plant in addition to the possibility of building electric vehicles for a company called Workhorse.

The person spoke to The Associated Press on the condition of anonymity because the person wasn't authorized to disclose details of the proposal, which haven't been revealed publicly.

Talks between the union and GM broke off Sunday and the union says it plans to go on strike just before midnight.

General Motors says it presented what it believes was a strong offer to the roughly 49,000 workers at its U.S. plants, including improved wages and benefits and investments in eight facilities in four states.

The automaker says in a news release that it is disappointed by the United Auto Workers union's decision to have its members at GM plants go on strike just before midnight on Sunday.

GM says its bargainers "negotiated in good faith and with a sense of urgency," and that its goal remains to "build a strong future" for its workers and business.

Union spokesman Brian Rothenberg said at a news conference that although it's still possible the two sides could hammer out a last-minute agreement, it would be hard to believe they could resolve so many issues before 11:59 p.m.

The strike will affect GM plants in Michigan, Ohio, Tennessee, Kentucky, New York, Texas and elsewhere in the U.S.

The United Auto Workers union says its contract negotiations with General Motors have broken down and its roughly 49,000 members will go on strike just before midnight on Sunday.

A United Auto Workers official says the union's General Motors workers will strike if the automaker "refuses to give even an inch" in contract negotiations.

UAW spokesman Brian Rothenberg says in a news release that such a strike would begin Sunday night.

The union let its contract with GM expire on Saturday, raising the possibility of a strike. UAW leaders are meeting Sunday in Detroit to discuss the union's next steps.

Union leaders have said the two sides are far apart on economic issues.

GM said in a statement Saturday night that it still held out hope for an agreement, saying it continues to work on solutions to difficult challenges.

The four-year contract between General Motors and the United Auto Workers expired Saturday, but workers were told to report to jobs as negotiations continued and the prospect of a national strike loomed.

The union let the contract lapse, raising the possibility of a strike as early as Sunday night.

There was a wrinkle. About 850 UAW-represented janitors with Aramark, a separate company, went on strike Sunday after working under an extended contract since March 2018.

The strike covered eight GM facilities in Ohio and Michigan. It appeared that GM workers were crossing picket lines Sunday set up by their own union. The Detroit Free Press reported that GM workers at a Flint, Michigan, truck plant reluctantly passed picketers.

GM said it has contingency plans for the Aramark strike.

The four-year contract between General Motors and the United Auto Workers has expired as negotiations on a new deal continue.

Union officials told GM they would let the contract lapse just before midnight Saturday, increasing the risk of a strike as early as Sunday night. Union members working Sunday were to report as scheduled.

There was a wrinkle. About 850 UAW-represented janitors who work for a separate company, Aramark, at eight GM facilities went on strike Sunday. Factory workers may not cross their picket lines.

Two groups of union leaders will meet Sunday to decide the next steps.