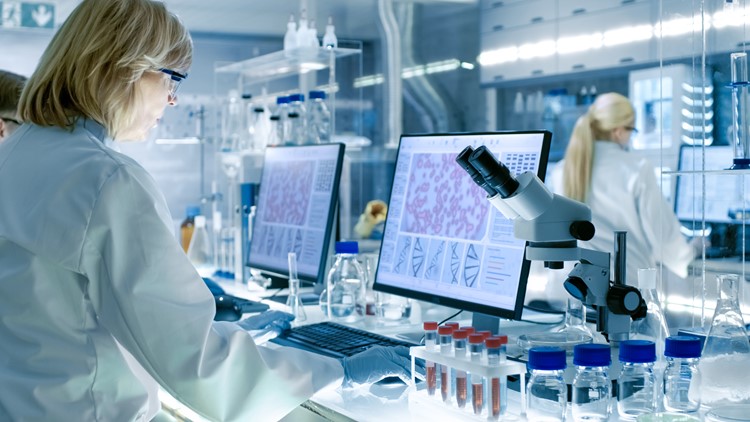 Senior Female Scientist Works with High Tech Equipment in a Modern Laboratory. Her Colleagues are Working Beside Her.

MINNEAPOLIS — There isn't a magic bullet in curing and preventing the mysterious polio-like illness impacting children in Minnesota and other states, but there is now more understanding of the rare condition thanks to researchers at the University of Minnesota (U of M).

In a just-published report, lead author Heidi Moline, MD, MPH, Chief Resident of Pediatrics at the U of M Medical School and U of M Masonic Children’s Hospital, collaborates with experts from the Centers for Disease Control and Prevention (CDC) and the Minnesota Department of Health (MDH) to better understand the course of illness and cause of acute flaccid myelitis, a condition known simply as AFM.

Between September 14 and October 1 of 2018, six children were hospitalized in the Twin Cities area showing symptoms consistent with AFM, a condition that causes severe muscle weakness and loss of muscle in one or more parts of the body. This profound weakness is caused by inflammation of the spinal cord.

All six of cases were later confirmed as AFM by the CDC. By the end of 2018, there were a total of 10 confirmed cases of AFM in Minnesota.

Most importantly, in their research Moline and her colleagues helped pinpoint an individual virus that may be at the root of this debilitating disease.

"Acute flaccid myelitis is incredibly scary for patients and families. The fact that we were able to definitively identify the EV-D68 virus as the cause of paralysis in one of our Minnesota patients, does suggest this virus as a probable cause in our other recent AFM cases," said Dr. Moline. "We are working with our public health partners to better understand this virus, and how it is affecting children in our community. Clinically, we need to continue efforts to rapidly identify these patients to optimize therapy and improve long term outcome of affected children.”

During her research, Dr. Moline located an excerpt from a 1877 book which described the onset of polio. She said it was striking, because it was almost identical to what the parents of her patients were describing to her: “A child of two or four years of age is put to bed well, and without the occurrence of any febrile illness in the night, flaccid paralysis of one or more limbs is discovered in the morning.”

In layman's terms, children would go to sleep feeling well, but then wake up unable to brush their hair or walk without assistance.

Other findings noted in the research paper include: