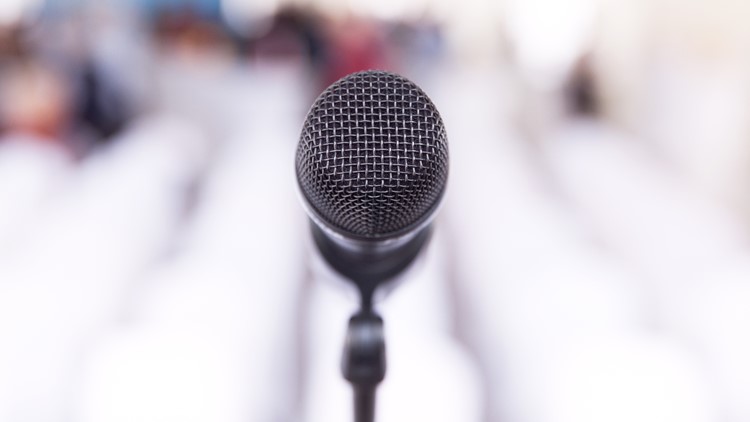 Photo by: Getty Images/iStockphoto
Microphone in focus, conference room without auditorium in the background

TOLEDO, Ohio — The battle between Ohio and Michigan has been unfolding since the dawn of time — or at least since 1835 — but now, 30 comedians from both states are hitting the stage to hash things out once and for all.

Monday night marks the first "Toledo War" comedy show at Bier Stube on Monroe Street. Fifteen comics from each state will only have two minutes to show the crowd what they've got, with the unofficial claim to Toledo on the line.

Three judges from Ohio, Michigan and Indiana will be calling the shots to ensure both states get a fair shot at the prize. However, showrunner, Dave Crumbley, isn't hiding where his allegiance lies.

"I got the idea to do the show because I'm a Buckeyes fan and thought it'd be funny to create another avenue to embarrass Michigan," Crumbley said.

Harsh words from the self-proclaimed "King of Regional Comedy," but that sort of ruthlessness seems necessary in walking away victorious from such a deeply-rooted rivalry.

Crumbley has been hosting a regular comedy show on the first Monday of every month at Bier Stube since July of 2018, but has not yet produced a show of this magnitude. It's taken a few months to plan Monday night's battle as wrangling a group of 30 comedians can feel like an impossible task. But, the time has come; the set list is locked in and local headliner Mark Philipp is ready to close the show with his obscure and dark style of comedy.

"I've never done a show like this before and quite frankly, I'm glad I'm not involved in the competition portion," Philipp said. "The fate of a city is a bit more pressure than I'm used to."

These amateur jokesters put it all on the line Monday night at 8 p.m. The 90-minute show is free. You must be 21-years-old or older to attend. Content may not be suitable for all audiences.

RELATED: Catch Jerry Seinfeld in Toledo at the Stranahan

RELATED: Take in fall colors aboard the Sandpiper starting Oct. 5