'We are aware of the very divided feelings that the citizens of Toledo, and the nation, hold right now. ' 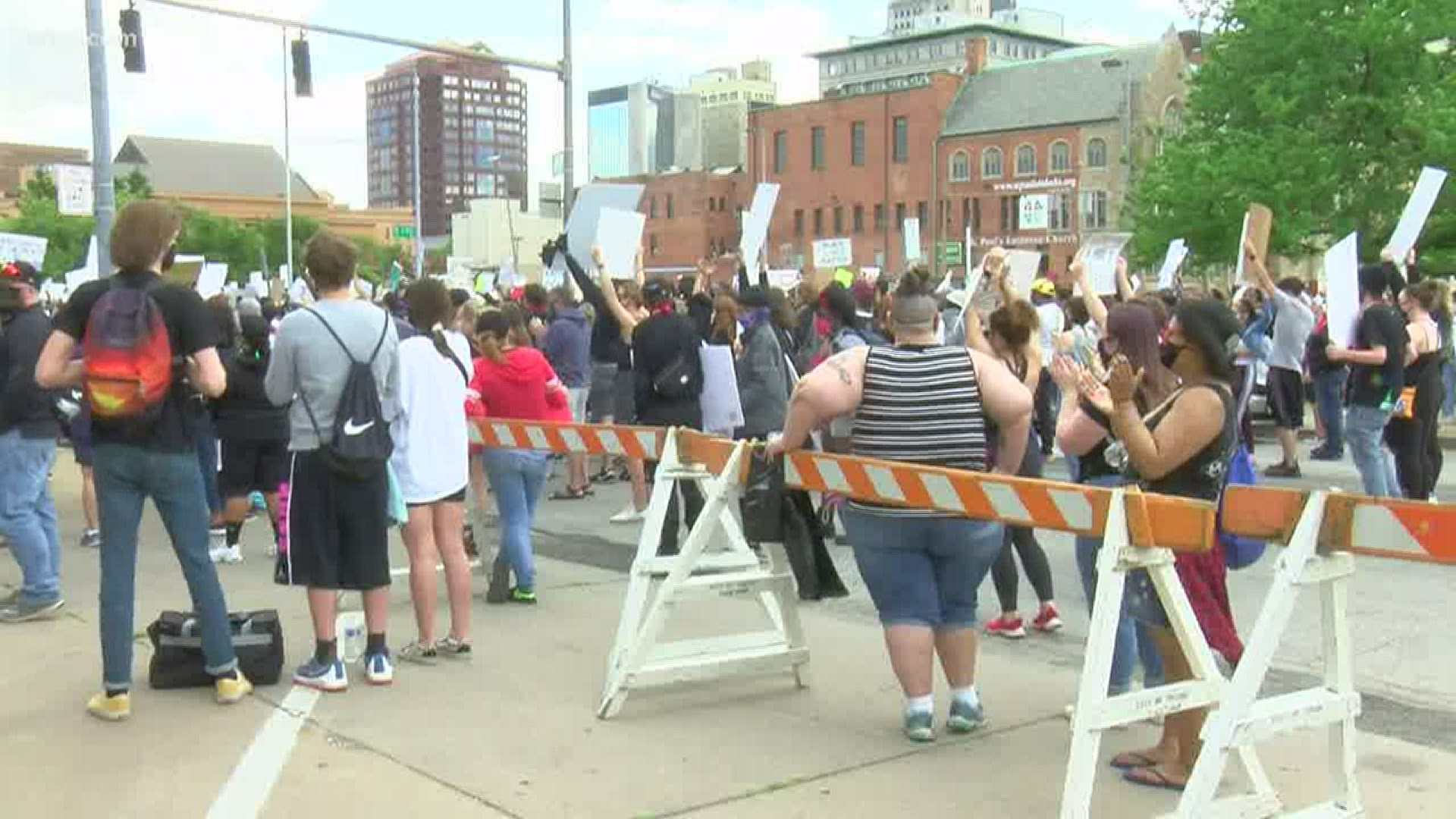 TPD also noted that officers themselves had rocks, bricks, fireworks, eggs and more thrown at them Saturday, and tensions were high from some people on all sides. TPD also said that complaints can be filed at Toledo.Police@toledo.oh.gov and the department will also be posting images of people they are trying to identify in relation to the violence that took place Saturday night.

Credit: Toledo Police Department
A Toledo police officer stands next to a police vehicle with a shattered back window as a result of violent protests Saturday in downtown Toledo.

"Toledo Police have been monitoring social media and the state of the city – we are aware of the very divided feelings that the citizens of Toledo, and the nation, hold right now. We know of the peaceful protests turned to violence on Saturday. One of the purposes of the department’s social media is to share our story.

"Officers had rocks, bricks, gas cans, incendiary devices, m80s, fireworks, eggs, and more hurled at them. Many of those objects struck officers and other protestors, causing injury. When protesters were hurt, Toledo Police, Toledo Fire, and some citizens came to help. Main roads were blocked by crowds of people. Businesses that were already hurting due to the recent shutdowns were further damaged and will be set back even more financially after the damage caused by the rioters. Citizen’s cars and marked police cars were damaged by rioters.

"Tensions and tempers were high from some people on all sides. It is possible that there were examples of officer misconduct on Saturday - and all formal complaints will be investigated. But, we will not allow the sacrifices and positive acts of hundreds of selfless Toledo Police officers to go unrecognized and unmentioned.

RELATED: Picking up the pieces: Locals volunteer to clean the aftermath of Downtown Toledo protest

RELATED: Nine men, one woman arrested on Saturday during aftermath of afternoon demonstrations

"Toledo Police show up for this city each and every day – after being attacked, spit on, and even shot at – all events which have happened this year alone. A news conference including Mayor Kapszukiewicz, Chief Kral, and possibly others will be held in the near future.

"Most of the information requests we are receiving are readily available on our website: toledopolice.com. Over the course of the next few days and weeks, we will be posting images of people we are attempting to identify in relation to Saturday’s events. A general email is available for the public to utilize at Toledo.Police@toledo.oh.gov.

"The coming weeks and months will be difficult, painful, and tough for all people. We recognize this and want to move forward working in conjunction with our community to preserve life, enforce the law, provide quality services, reduce the fear of crime, and promote joint problem-solving for safe, secure neighborhoods."