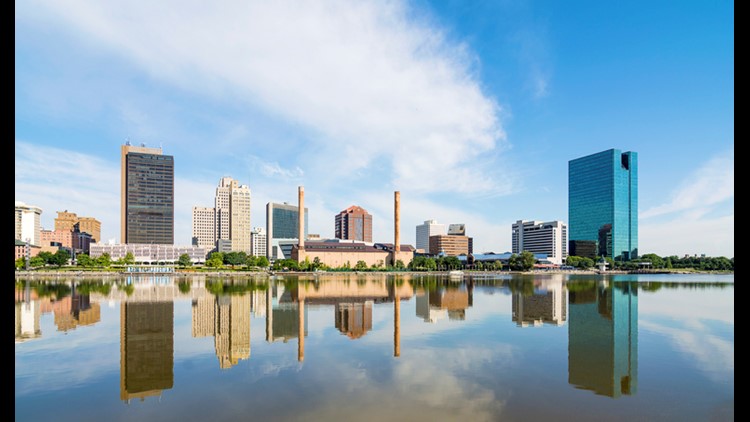 Photo by: Getty Images/iStockphoto
A panoramic view of downtown Toledo Ohio's skyline reflecting into the Maumee river. A beautiful blue sky with white clouds for a backdrop.

TOLEDO, Ohio — Toledo City Council voted for the installation of LED lights along Sylvania Avenue and approved $150,000 for the second year of the bike sharing program that will go towards maintenance costs on Tuesday's meeting.

The ordinance to set the lights up between Douglas Road and Secor Road was presented by council member Tom Waniewski. The goal is that the lights be an addition to the current ones and be more energy efficient as well as decorative.

At the end of the meeting, council member Tyrone Riley asked the administration for more information regarding the city's plan to install LED lights throughout Toledo.

"I look forward to continue these discussions, as well as receiving information from the department as well as the administration regarding LED lighting and where we intend to go. I fully understand that by 2021, the city should be completely LED lighting," he said.

Additionally, the council also approved an expenditure of $150,000 for the second year of the bike sharing agreement with Gotcha Bikes to go towards maintenance costs.

Since it's National Bike Month and the weather is getting nicer, council member Nick Komives encouraged residents to bike more often. However, council member Gary Johnson pointed out that people need to be more aware of the program.

"The Gotcha Bike, we passed a $150,000 ordinance so we can get that going, and I would really like to see is add something to that, which is a marketing plan. People have to know those bikes are out there," Johnson said.

The council also approved the mayor to enter an agreement with the Ohio Department of Transportation to let the state agency have the right to construct an interchange along I-475 and Dorr Street.

The ordinance is one extra step into the construction of the interchange. Last year, the city entered an agreement with ODOT in order to build the intersection, which will have a portion within Toledo city limits.

Members also voted unanimously to accept a $10,000 contribution from Cric_Boyz Group of Toledo and to authorize an expenditure of $8,750 to go towards building a second cricket pitch in the city. Ultimately, it will cost almost $20,000  to develop that pitch.