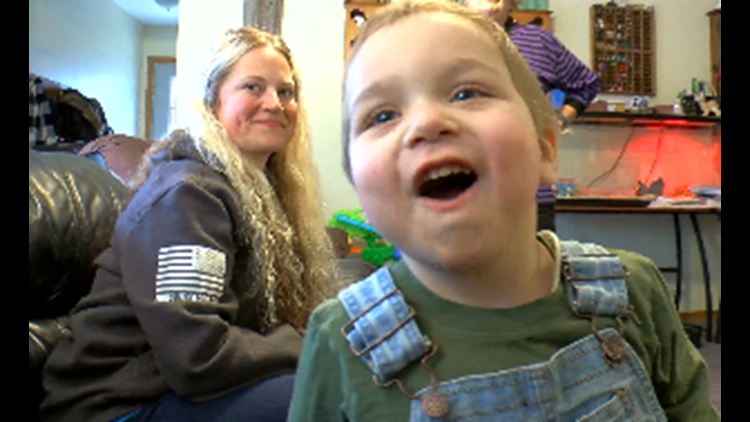 DELTA, Ohio — We first introduced you to 3-year-old Ronnie in April. He'd been on the list for a kidney transplant for two years when his mother stepped up efforts to find a donor. Her idea to get him some extra attention worked.

Ronnie, now 3 1/2, has always had energy. Now he has a little more. While you can't really see it, something else has changed.

"Mr. Ronnie has a kidney," said Ronnie's mother Mary Rusek. "And it has made him healthier and his labs are all great for the very first time in his life."

It's all thanks to his new friend, Nicole Bugaj. Ronnie was in end-stage renal failure when his mother Mary took out this billboard in search of a donor. Lamar Advertising ended up donating the cost of the advertisement.

"On my way to work, I saw the billboard. Probably saw it one or two days and finally wrote down the number and thought I at least have to call and see if we're even the blood type match at first," Bugaj said.

It turns out she was the perfect match.

Ronnie's family was finally filled with the hope they'd been waiting for, for two years.

"I jumped up and down. Numerously. Lots of times. And hurt my back," Mary Rusek said.

Bugai said she'd recently had a lifestyle change, lost some weight and felt the healthiest she ever has and thought it was the perfect time to save a life.

"It's awesome seeing him. He has so much energy now and just to know that I helped him out, it's touching," she said.

While Ronnie's feeling better, recovery will still take time as he adjusts to his new kidney, but there's belief he'll have it for many years.

"No more dialysis. And hopefully not for another 20-25 years," his mom said.

Now someone who was once a stranger, is part of the family.

"I love her. She will always be a part of us," Rusek said.

Bugai said the donation process was easy. She was fully recovered in about a week and recommends others consider giving the gift of life.

RELATED: Mother of 3-year-old in need of kidney takes out billboard in search of donor