Investigators say the lack of information from Gabrielle Petito's partner, Brian Laundrie, is hindering the investigation. 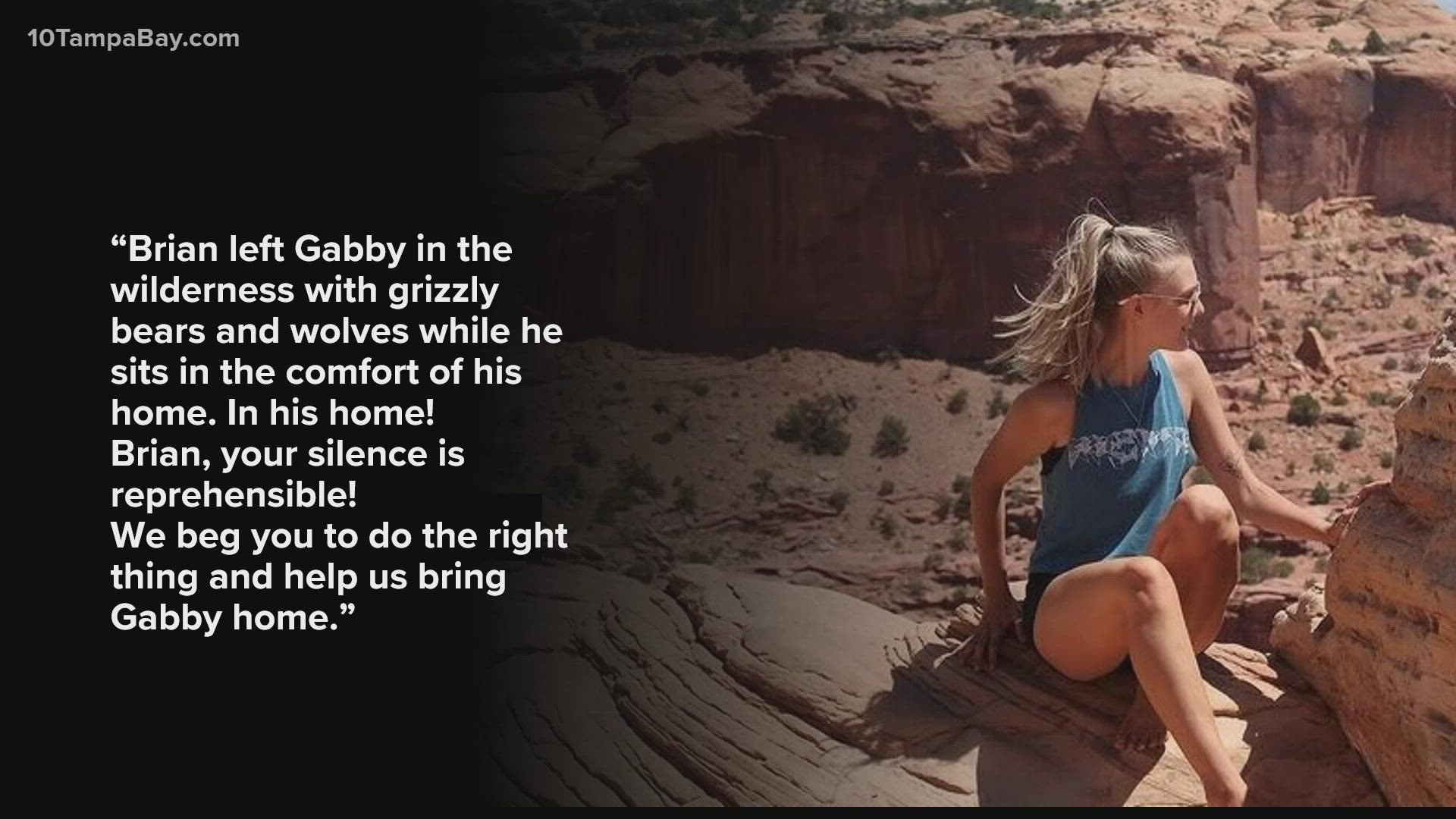 SAD UPDATE (Sept. 21, 2021): The FBI announced Sunday night that a body had been found matching the description of Gabby Petito. On Tuesday, the coroner confirmed her identity and ruled her death a homicide. Click here for the latest updates.

Gabrielle Petito's fiancé, Brian Laundrie, has been named a person of interest in her disappearance.

North Port police say Laundrie "has not made himself available to be interviewed by investigators" or "provided any helpful details" that would lead them to figure out what happened to the missing 22-year-old Florida woman.

"We don't know what Brian knows. I mean, that's the bottom line," Police Spokesperson Josh Taylor said Wednesday at a news conference. "He needs to talk to us."

The two set out on a cross-country road trip in July in a van that police say was later discovered at the home of Laundrie and his parents in North Port, Florida, where Petito lived. The van was processed for any evidence Tuesday, Sept. 14, in coordination with the FBI, authorities said.

Credit: North Port Police Department
The van police say Gabrielle Petito and her boyfriend, Brian Laundrie, were traveling in on a cross-country road trip. It was recovered at Laundrie's home.

Police say Laundrie returned to North Port on Wednesday, Sept. 1, about 10 days before Petito's family reported her missing as they hadn't seen or heard from her in weeks. She was last known to have been in Grand Teton National Park in Wyoming before losing communication, according to the Suffolk County, New York, Police Department.

Her family, who lives on Long Island, reported her missing on Saturday, Sept. 11.

Police went to the Laundrie home on that Saturday to speak with Brian and his family, but were instead handed information for the family's attorney, Taylor said. In a statement, the Laundrie family said, "...On the advice of counsel, the Laundrie family is remaining in the background at this juncture and will have no further comment."

The counsel for the Laundrie family released a statement late Wednesday evening, saying in part:

"Many people are wondering why Mr. Laundrie would not make a statement or speak with law enforcement in the face of Ms. Petito's absence. In my experience, intimate partners are often the first person law enforcement focuses their attention on in cases like this, and the warning that "any statement made will be used against you" is true, regardless of whether my client had anything to do with Ms. Petito's disappearance. As such, on the advice of counsel Mr. Laundrie is not speaking on this matter.

I have been informed that the Nort Port, Florida Police have named Brian Laundrie as a "person of interest" in this matter. This formality has not really changed the circumstances of Mr. Laundrie being the focus and attention of law enforcement and Mr. Laundrie will continue to remain silent on the advice of counsel."

There is no information indicating that a crime occurred in North Port, the department said.

#BrianLaundrie family members seen entering the home this morning. The family released a statement Tuesday through a lawyer saying they’re aware of an ongoing investigation & the launch of a search for #GabbyPetito would ‘remain in the background’ & offer ‘no comment’ @10TampaBay pic.twitter.com/26BWJt34Ff

“As a father, I can imagine the pain and suffering Gabby’s family is going through. We are pleading with anyone, including Brian, to share information with us on her whereabouts in the past few weeks," North Port Police Chief Todd Garrison said in a statement.

"The lack of information from Brian is hindering this investigation," he continued. "The answers will eventually come out. We will help find Gabby and we will help find anyone who may be involved in her disappearance."

The Petito and Schmidt families, Gabrielle's families, released a statement Wednesday afternoon in reaction to authorities' update, saying in part:

"Everyday the search for Gabby continues the Schmidt and Petito family becomes more desperate. They are frantically searching for answers and information in their daughter’s disappearance while Brian sits in the comfort of his home.

"Brian claims he wants to sit in the background while we search for Gabby in the wilderness of the Grand Teton and Yellowstone national parks. ...Brian, your silence is reprehensible! We beg you to do the right thing and help us bing [sic] Gabby home.

"Brian, whatever happened in Wyoming, happened. The only thing you can control is what you do now. Tell us where Gabby is."

The 22-year-old Petito is 5-feet, 5-inches tall and weighs 110 pounds, according to police. She has several tattoos, including one on her forearm that reads, "let it be."

Petito and Laundrie reportedly documented their travels along the way on social media as "Nomadic Statik."

Petito was last known to have been in Grand Teton National Park in Wyoming before losing communication, according to the Suffolk County, New York, Police Department.

Laundrie and Petito had a run-in law police on Aug. 12 in Moab Utah. Investigators say it appears Petito had an emotional breakdown, slapped Laundrie and scratched his face. There's no evidence he hit her, officers said. The couple separated for the night to calm down. No charges were filed. You can read more about that situation here.

Petito's family, who lives on Long Island, reported her missing on Saturday, Sept. 11, although Laundrie returned to North Port in the van ten days prior on Wednesday, Sept. 1, according to police.

Petito's mother told KSL-TV the last text she received from her daughter was Aug. 30, and then she stopped responding. She figured Petito and her fiancé lost reception but has since figured something has been off.

Petito's family says despite their pleas, Laundrie "refuses to help" in the investigation.

"Brian is refusing to tell Gabby’s family where he last saw her. Brian is also refusing to explain why he left Gabby all alone and drove her van to Florida. These are critical questions that require immediate answers," the family's statement said, in part.

Meanwhile, the Laundrie family "is remaining in the background" in the investigation, according to a statement by a counsel for the family.

On Sept. 15, Laundrie was named a person of interest in Petito's disappearance.

North Port Police said he "has not made himself available to be interviewed by investigators" or "provided any helpful details" in the case of his missing girlfriend.

The department again pleaded with Brian and the Laundrie family to speak with investigators.