American Red Cross volunteers set up a pop-up shelter at Church of the Cross to help those who were displaced after their homes were destroyed in a fire Wednesday. 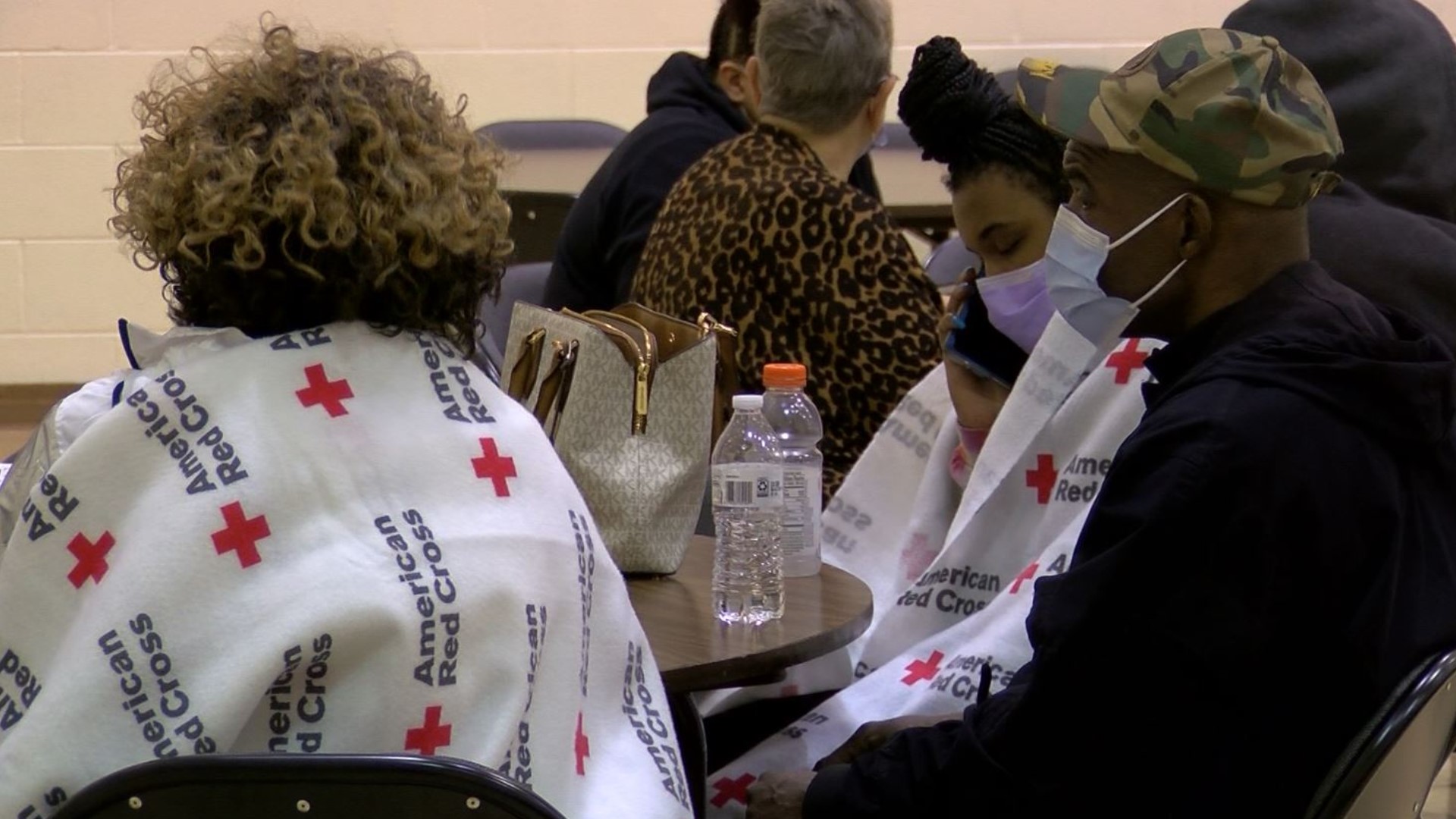 TOLEDO, Ohio — The American Red Cross wasted no time in getting help to residents affected by the fire at Tanglewood Apartments on Cresthaven Lane in south Toledo Wednesday.

Many people across Toledo were able to see the thick smoke from this fire, including Pastor Joel Schutte of Church of the Cross.

He said one of his board members is a Red Cross volunteer and reached out to him to see if their church could help in some way. Schutte made a phone call early on to the Red Cross and within minutes they arrived to help others.

Even though the gymnasium was set up for a Holy Week event tomorrow, he couldn't think of a better way to use it right now.

"Looking at some of the residents, those displaced, just shock and not knowing what to do, I can't imagine being in their footsteps," said Schutte, "so I think it's just great being able to help them."

Close to three dozen people walked into the church throughout the night. Many were still in shock by the events of the day.

"It started on one end of the building and took over the entire building," resident John Robinson said.

The two-alarm fire ripped through the Tanglewood Apartments quicker than people could react, leaving residents in disbelief.

"It was such a rush, it was like a TV show," said Joe Ellis, who was visiting his grandparents, "it was like watching a tv show. It was just crazy."

Dozens of people, like Ellis' grandparents who have lived there for more than seven years, couldn't believe how quickly it spread.

"Flames, everything damaged," said Ellis. "Once it entered the ventilation system, as the fire department said, the roofing system, it pretty much damaged everything, no wall structure, anything left."

Ellis' grandmother had photos of her sister who had passed away years ago and, like others, they lost everything in the fire. He recalled looking back at the building from the woods nearby as it burned and thinking of what they had lost.

"It was so devastating," said Ellis. "All the memories, you know, you can't remake those memories with someone who passed away."

"It sucks for everybody," Robinson said. "Everybody works hard as Americans, so to lose everything in one, so that's tough."

The pop-up shelter at Church of the Cross offered some supply kits along with caseworkers to find out what they need. The Red Cross is working to find temporary shelter for everyone displaced.

"It's a collaborative effort when something like this happens. Our community, we draw together," said Toledo Fire & Rescue Department spokesperson Pvt. Sterling Rahe, late into the evening fighting the fire. "That was evident with the Red Cross opening up and occupying a church over on Eastgate. Church of the Cross opened up their doors to bring people in. That's what this community is all about, helping each other. We'll get through this and hopefully get people back on their feet again."

"You see the devastation in these residents' faces, everything that they've worked for, everything they own is now up in flames, that's difficult," said Rachel Hepner-Zawodny, executive director of the northwest Ohio chapter of the American Red Cross. "You see someone on their worst day. We're proud of the fact we can be a part of the solution and start that healing process."

Residents told me just the fact they were there meant so much to them.

@RedCrossNWO sprung into action in mere minutes after hearing of the fire at Cresthaven Apts. At Church of the Cross, they were able to help nearly 3 dozen residents displaced @WTOL11Toledo pic.twitter.com/sSF9OMlmXB

"You're shell-shocked at first. You're processing," Robinson explained. "So they give you an opportunity to kind of slow things down."

Ellis said his family appreciates the Red Cross for being there when they need someone the most.

"You never think people will come out and help like this," he added, "I'm a heart-giving person and I'm glad they came out and helped liked this."

Pictures, belongings, and memories were lost, but Robinson says his family is okay and that's all that matters.