Several groups splintered off, with some marching down Constitution Avenue, while others headed towards the entrance to the South Lawn where Trump spoke. 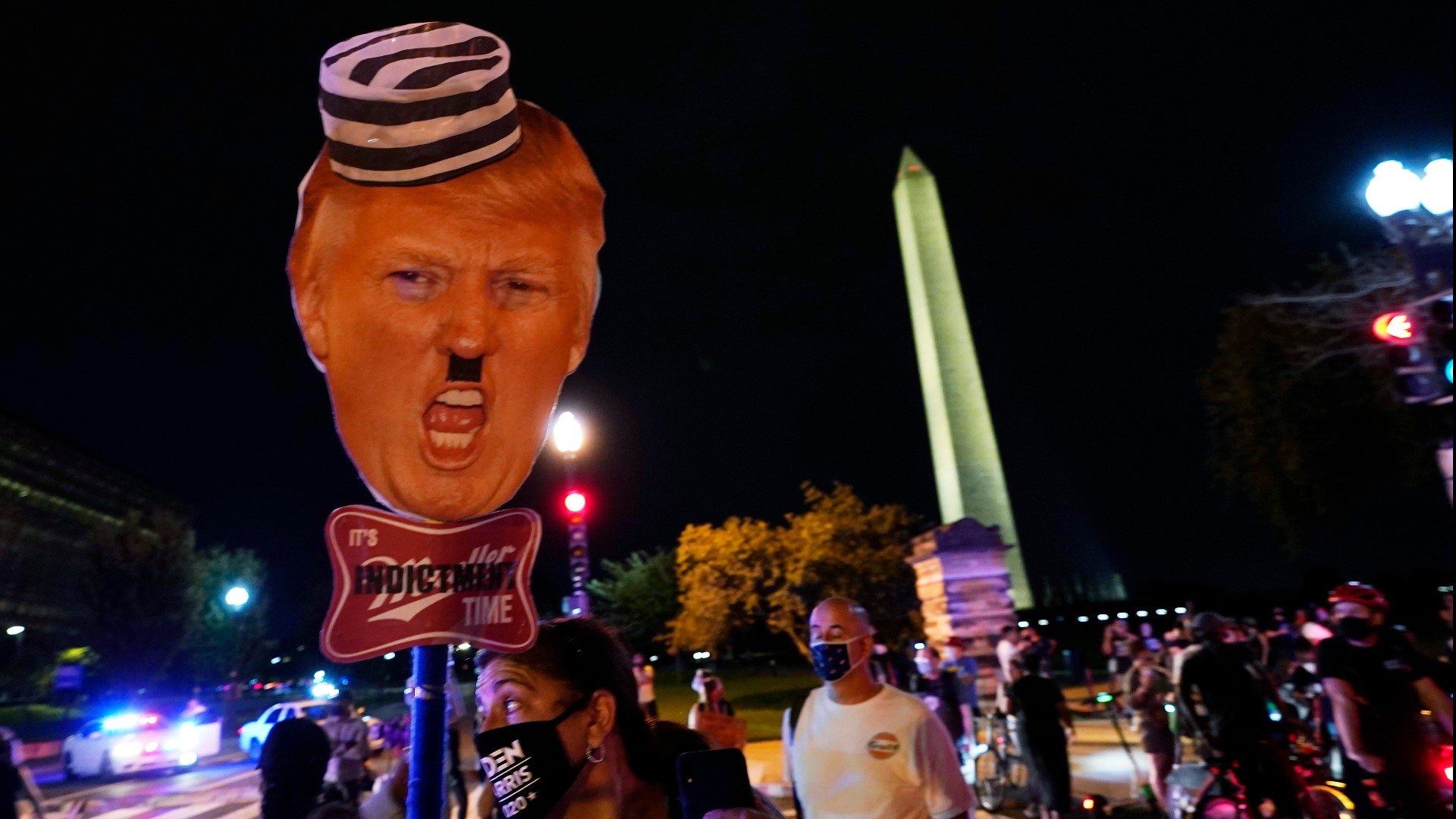 WASHINGTON — On the night before March on Washington, members of the GOP sat on the South Lawn awaiting President Donald Trump's official renomination speech to close out the final night of the Republican National Convention. Just outside, hundreds of protesters gathered in the spot that has become the epicenter of racial justice protests in D.C. since the death of George Floyd: Black Lives Matter Plaza.

Several groups splintered off, with some marching down Constitution Avenue, while others headed towards the entrance to the South Lawn where a fireworks show followed the president's RNC speech.

On Constitution Avenue, the vibe was very much a party, and a mobile party at that as a Go-Go truck made its way down the avenue, followed by a school bus outfitted with a basketball hoop on the front for participants to shoot a few hoops while they marched.

Standing at the fence leading to the South Lawn, a smaller group gathered determined to make a lot of noise. WUSA9 reporter John Henry said everyone he observed had noisemakers and they were prepared to "drown out" Trump's speech wrapping up the RNC.

15th and Pennsylvania. Protesters are waving noisemakers and shooting fireworks right outside the White House gate in an effort to drown out President Trump’s speech. (@wusa9) pic.twitter.com/q5zXRu3rfr

As the president began speaking, Henry said the crowd began enthusiastically shaking their noisemakers and setting off their own fireworks.

ShutDownDC and an organization called Purpose Party organized most of the demonstrations outside the White House.

RELATED: ‘We refuse to stop until we get that justice’ | 23-year-old activist prepares for March on Washington

The Go-Go protest bus is now at 15th and Pennsylvania. Large crowd of protesters. They’re close to the entrance that would lead to the South Lawn of the White House. (@wusa9) pic.twitter.com/lutXJIxTSZ

The crowd near Lafayette Sq near the White House as #RNC plays out on other side. @wusa9 pic.twitter.com/MVKKKe3UgS

The president concluded his speech around 11:30 p.m.

MEANWHILE — Here on the north side of the White House...
Crowd counterbalancing the president’s acceptance speech #RNC2020 @WUSA9 @CBSNews pic.twitter.com/8tjkcXYVcW

Following the speech, crowds were still gathered around the east side of the White House blocking a bus entrance.

VIDEO: This is the scene near the east side of the White House. Big crowd of protesters blocking the entrance where buses arrived (to pick up guests?).@wusa9 pic.twitter.com/BjExkYdgFH

WUSA9's John Henry reports at least one person was taken into custody following a clash between police and protesters after midnight, while some members of Congress were leaving the White House.

A scuffle on BLM plaza b/n police and protesters. They took someone into custody. Couldn’t see what happened. A few congressmen are exiting the White House complex just yards away. (@wusa9) pic.twitter.com/EZb7EjdPbw

Crowds remained in the area until into the early hours of Friday morning.

Scene has calmed down a bit at 15th/Pennsylvania. Protesters now standing right up to police line. @wusa9 pic.twitter.com/60k1Plhzea

Crowds eventually dispersed by early Friday morning ahead of the March on Washington.Between Thursday afternoon and Friday morning, eight arrests were made, according to Metropolitan Police Department data.

RELATED: Everything you need to know about this year's March on Washington 2020