Local organizers of the Black Lives Matter movement said they plan to keep demonstrating until city and state officials do more to eradicate systemic racism. 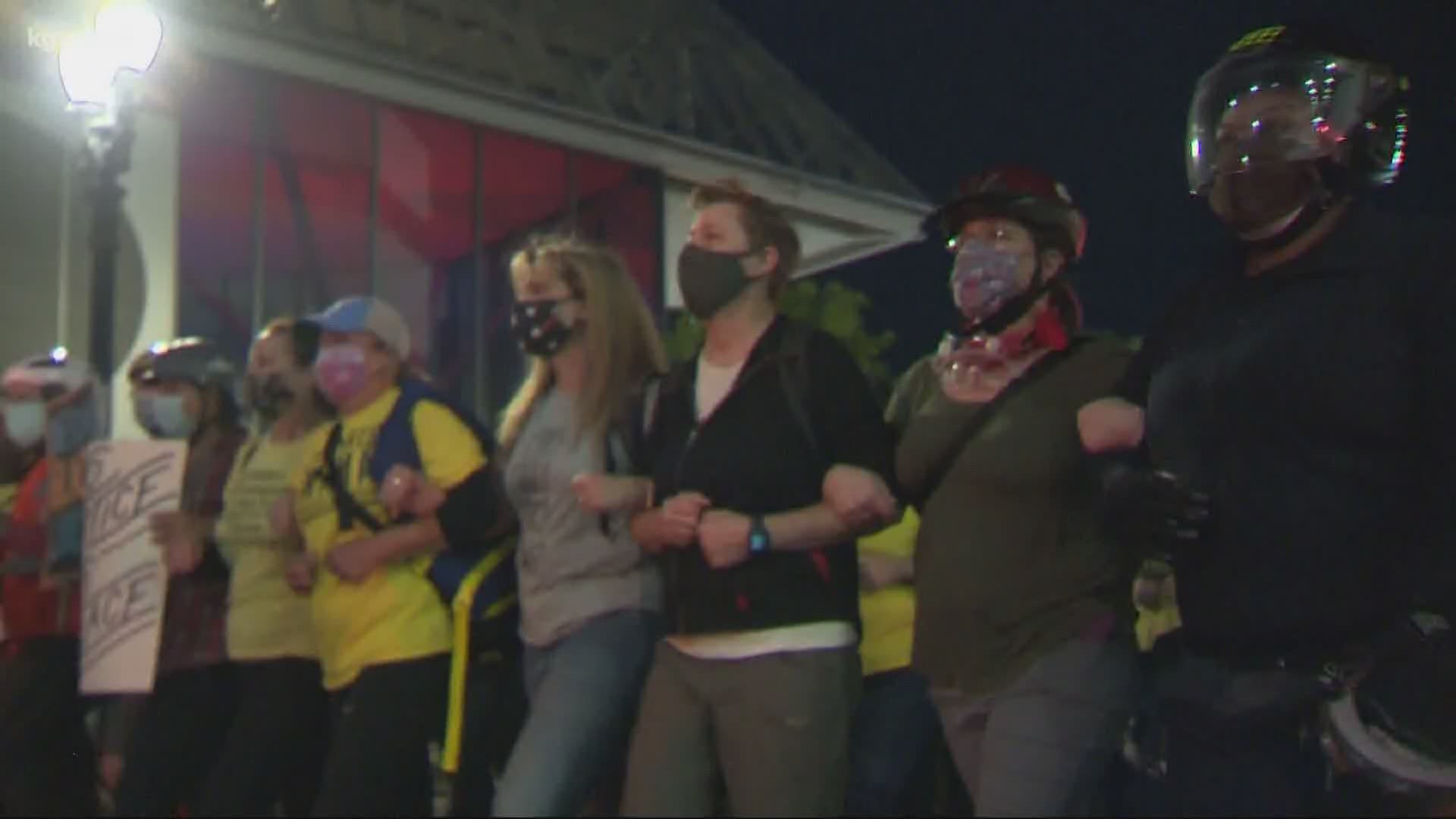 PORTLAND, Ore. — Protests and rallies against police violence and racism continued in Portland Friday, the second night since local and state officials confirmed federal officers would no longer be leading the response to demonstrations downtown.

Instead, a spokesperson for Gov. Kate Brown’s office said close to 100 Oregon State Police troopers would be deployed to Portland to guard the city’s federal courthouse. However, President Donald Trump tweeted Friday night that Homeland Security is still monitoring the protests in Portland.

Thursday’s protests, for the first time in weeks, were largely peaceful. KGW’s crews on the ground saw zero state or federal officers on the scene all night. That was the case again Friday night.

The Portland Police Department said in a statement early Saturday that there was no police interaction with the crowd, which dwindled down to a few dozen people around 2:30 a.m.

For a second night in a row, no visible law enforcement presence as a crowd gathers and chants in the streets surrounding the federal courthouse in Portland. pic.twitter.com/9sxaQ9VRZH

The crowd remained loud and passionate but peaceful, chanting "Black lives matter" into early Saturday morning. Protesters also gathered around a bonfire early Saturday where they continued to speak about the Black Lives Matter movement.

Friday marked the 65th consecutive night of protests in the wake of George Floyd’s death. Several demonstrations were held across the city as protesters refocused the message from the presence of federal officers to eradicating systemic racism.

As usual, groups converged outside the Multnomah County Justice Center and federal courthouse, which are just a block away from each other in downtown Portland. The crowd was estimated to be more than 1,000 people, but filtered out into early Saturday morning.

Back outside the federal courthouse. Bigger than last night’s. All supporting #BlackLivesMatter #PortlandProtests pic.twitter.com/lU99PiDk2q

One group, Moms United for Black Lives Matter, formerly known as the Wall of Moms, marched to the Justice Center after meeting earlier in the night at the Salmon Street Springs at Waterfront Park. At the springs, the group gathered around a memorial that honored 216 Black lives taken by racial violence.

“Put your fists up!”

There were also speakers who addressed their experiences and the systemic change that they say needs to happen for racial equality. The speeches started around 9 p.m. and ended around 10:30 p.m.

Eric Knox, the girls basketball coach at Benson High School, and Demetria Hester, one of the women of color who was harassed and assaulted by convicted MAX train killer Jeremy Christian, were among the demonstrators who spoke.

"I work with Black kids and I understand the hurdles they have to deal with in a city like this, Knox said. "There's a very, in my opinion, low-bar expectation for Black kids. So, this movement has really empowered them and empowered us."

Elsewhere, members of the groups Changing the Gray Street Outreach, The "X" Project, and Rose City Justice gathered at Revolution Hall in Southeast Portland to honor Xeryus "Iggy" Tate, a Portland man who was murdered four years ago. At one point, a car parade passed by the rally.

RELATED: 'Fighting for a Revolution': Small crowd gathers for rally at Revolution Hall in Southeast Portland

On Thursday, local organizers of the Black Lives Matter movement said they plan to keep demonstrating until city and state officials do more to eliminate systemic racism in Oregon.

On Friday morning, Homeland Security Secretary Chad Wolf indicated federal officers were still present, even if they weren’t showing themselves at the demonstration.

He tweeted “This is what partnership in Portland looks like," showing a photo of two Homeland Security officers and an Oregon State Trooper.

This is what partnership in Portland looks like. No violent activity against the courthouse last night. Stepping up and doing the right thing should not take 60 days. pic.twitter.com/0zVb07y0hL

The post confirmed suspicions of protesters downtown Thursday, who said they believed federal officers would remain in Portland, despite Gov. Kate Brown’s assurance that OSP would be taking over guarding the courthouse.

The announcement of that deal with the Trump administration came weeks after federal agents arrived in Portland. Dressed in camouflage tactical gear, the officers, agents with Customs and Border Protection and the U.S. Marshals Service, routinely deployed tear gas and "non-lethal" munitions into crowds, hospitalizing protesters and journalists alike.

Portland Mayor Ted Wheeler repeatedly denounced the uses of force, and, on one occasion, stood on the front lines with demonstrators as tear gas rained down.

Multiple groups, including the American Civil Liberties Union of Oregon, took federal agencies to court to put an end to the tactics. The promised drawdown of federal presence in and around the Mark O. Hatfield United States Courthouse Thursday was aimed at bringing an end to those tactics and de-escalating the protests.