2020 Komen Race for the Cure in Toledo celebrates Sheryl Wingate

A woman with a lot of love in her heart, she already knew cancer all too well before it knocked on her door. 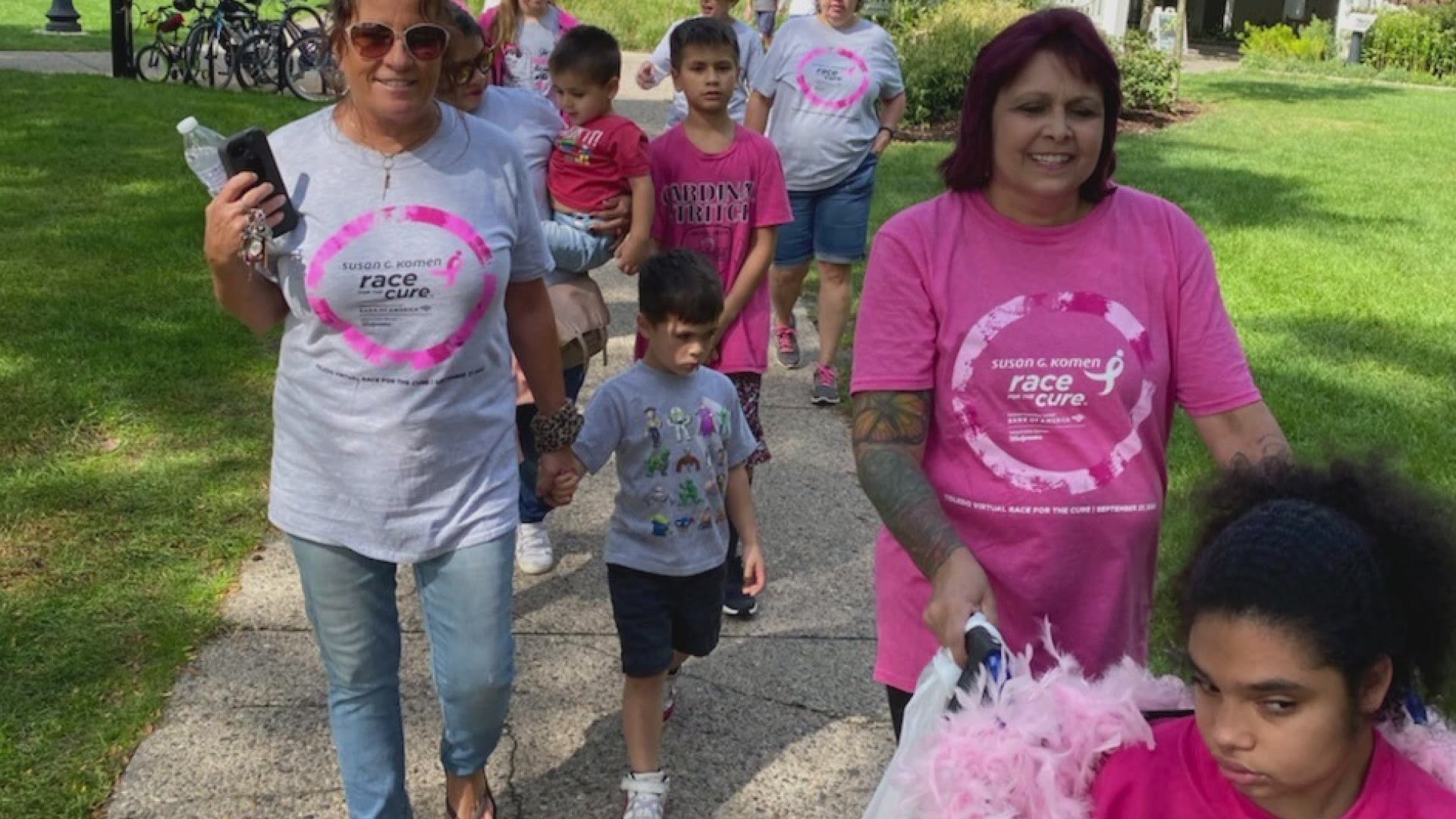 TOLEDO, Ohio — This year's Susan G. Komen Race for the Cure in Toledo is In Celebration Of Sheryl Wingate.

A Toledo woman with a lot of love in her heart, she already knew cancer all too well before it knocked on her door.

A couple of weekends ago, there was a celebration of Sheryl. It wasn't the big Race for the Cure that we are used to seeing in downtown Toledo, but dozens of family members and friends gathered at Wildwood Metropark on Sept. 13 for Sheryl's own Race for the Cure.

There is a virtual Race of the Cure this year due to the coronavirus pandemic, but Sheryl is having reconstructive surgery just before the big race.

The surgery is because of a heartbreaking diagnosis she received in 2018 when Sheryl found a lump while in the shower.

Sheryl then had a mammogram and biopsy, and received news that no one wants to hear.

"Then I had a PET scan and it confirmed that I had invasive poorly inductal carcinoma, triple negative," said Sheryl.

Her first thought was of her family.

"It was devastating because the first thing I thought of was 16 kids, and how do you leave 16 kids?" Sheryl said.

You read that right.

Sheryl and her husband Paul became foster parents in 1998, keeping their home filled with love.

"Kids just kept coming in and leaving and coming in and then not leaving. We ended up adopting 13. We have three biologicals," Sheryl said.

Sheryl describes her home as "organized chaos." There isn't a lot of peace and quiet but a lot of support, which she would need for the fight ahead - a fight she never thought she would have to face.

"Never in a million years. Never. I'm never sick. I'm always healthy. I have asthma but it's under control, so this was a total shock," Sheryl said.

She started treatments in November of 2019 and endured 26 rounds of chemotherapy.

"I was done with that in March, and then I immediately went into 30 rounds of radiation. I finished that Aug. 26, the day the kids went back to school last year," said Sheryl.

Sheryl is a huge supporter of Washington Local Schools and has two kids at Jackman Elementary., one at the junior high school and four at the high school.

It was her family, on top of the treatments, that pushed her through.

Sheryl beat her cancer and has been cancer-free since September of last year.

But her fight continues for family members to find a cure - not for just breast cancer, but all kinds of this devastating disease.

But through it all, she pushes on.

She's honored that the Toledo Race for the Cure is in celebration of her and her courageous battle.

But she admits it's bittersweet.

"I'm honored and saddened at the same time. It's hard to be happy and celebrate when [my daughter] just passed on the 26th. But I'm glad I get this chance to show what I have. I'm glad I'm cancer free. I wish this on nobody."