The board recommends schools start virtually and delay fall sports until at least Oct. 1. 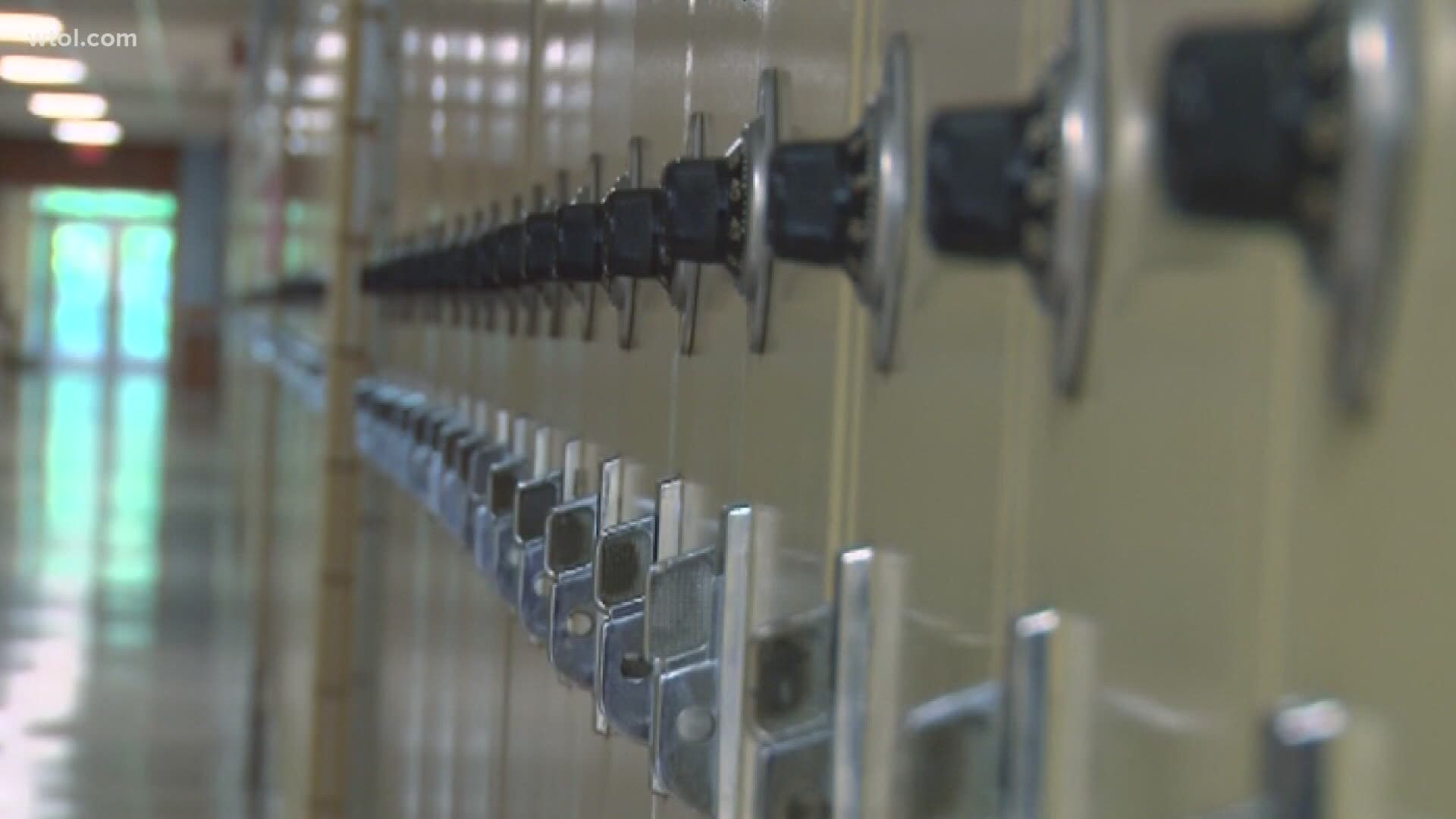 SYLVANIA, Ohio — The Lucas County Regional Board of Health voted Thursday to recommend schools begin the year virtually, and for fall sports to be delayed, as community spread of COVID-19 is still prevalent in the county.

In fact, cases seem to be on the rise among the youngest parts of our population, health commissioner Eric Zgodzinski said.

However, it isn't just the children who are at risk. Health leaders are concerned about the adults who work within these schools and interact with students each and every day.

The official recommendation asks that schools go online-only until at least Oct. 1, when the board can reevaluate the situation. Fall sports should also be suspended pending reconsideration on Oct. 1.

As of Thursday, Lucas County had 183 cases per 100,000 people, roughly seven times above the level experts say they are comfortable letting students return to school.

In fact, out of all 88 counties in the state, Governor Mike DeWine listed Lucas at the second-highest for this metric.

Zgodzinski said the CDC recommendations illustrate that as long as you have low numbers of the community you can go back to school, but if you have high numbers, going back to face-to-face learning is likely to exacerbate those problems.

Zgodzinski called on adults to set a good example for children as they struggle to get used to guidelines like mask use and social distancing.

He said that while the health department has the authority to issue an order, he thought it would be best to only issue a "strong recommendation" to start the year online.

"I would hate to start school and within four weeks have to look at forcing schools to go virtual in a very quick manner," Zgodzinski said.

Board member Dr. Richard Fernandez made clear that the goal for the board is to get students back to face-to-face learning. But, they have to work backward to figure out the best way to get to that place.

Zgodzinski said that discussions have already begun on when it would be appropriate for schools to return to in-person learning as well as best practices on how to safely do so. However, those recommendations are still in the works and nothing official was announced during Thursday's meeting. Zgodzinski did say, however, that his team would not be dragging their feet, as the goal is to get kids back into the classroom as quickly as they can.

Lucas isn't the first count in the area to recommend a virtual start this fall. On Wednesday, the Erie County Board of Health issued a recommendation for schools in the county to begin the year online. Public school districts within Erie County agreed to start the year entirely remote, following the board's recommendation.

Many districts already released plans well in advance of Thursday's meeting. However, some are now changing course following the release of this new guidance.

Maumee City Schools has taken a major turn after first planning to go back in-person, five days a week. On Thursday, the district released a statement that said, in part:

Dr. Cramer has proposed to push the district's start date back until Sept. 8, in the hopes of giving parents time to adjust to these changes.

The letter released to parents said that a decision about sports is still in the works, and school leaders will follow the Ohio High School Athletic Association's guidance.

Oregon City Schools plan to start the year fully remote when the school year begins on Aug. 24. The original plan was to start the year in a hybrid model, but school leaders made the decision to go virtual after the regional health board's recommendations.

The first full week of school will be used to acclimate students and parents to fully remote learning, with school officially starting the week of Aug. 31.

All fall sports and other extracurricular activities are also suspended until Oct. 1 at this time, according to a letter from superintendent Hal Gregory.

The school says there will be no in-person learning before Oct. 15, with the possible exception being special needs students, preschool programs and Career Technology programs.

Its school year will now start on Aug. 24 remotely, with a goal to start in-person learning by Sept. 8, five days a week.

Fall sports for Ottawa Hills will continue with proper OHSAA guidelines and procedures in place, according to Superintendent Adam Fineske.

Springfield Local Schools Board of Education approved a plan on Aug. 7 to return to school remotely on Aug. 31. An optional, hybrid-style orientation will take place the week before to ready students for the virtual learning environment and distribute ChromeBooks to those who may need them. The fully-remote learning is expected to last until Oct. 1, with leaders meeting regularly with the TLCHD to determine a safe date to return to hybrid-style learning or whatever the best practice may be at that time.

The Sylvania school board has voted on a tentative plan to slowly bring the district's students back to the classroom.

The board voted to bring K-5 students back to the building on Sept. 14 under the district's "green" level. Students in grades 6-12 will also return on Sept. 14, but utilizing a hybrid system. At this time, it is unclear when the older students will return full time.

Leaders with Toledo Public Schools had already decided last week that the district would start the school year virtually under a stoplight inspired, color-coded system. TPS leaders anticipate remaining under "Red Light" status and learning remotely for the entire first semester, although that could change.

The school year will start Sept. 8.

Leaders with Washington Local Schools announced the district would start the 2020 school year virtually. The school system had initially announced a hybrid model.

But not all districts are changing things up.

St. John's Jesuit High School is already back to in-person learning five days a week, having begun the semester on Monday. It is unclear if these plans will be altered in light of the board's vote.

St. Ursula is sticking with its initial plan to allow parents to choose whether their kids go in-person or stay remote, despite the board's recommendations.

The school says it's big enough to safely bring students back into the school with ensured social distancing and face masks for all while following daily sanitation and hygiene requirements.

Since the board of health's recommendation, Sylvania Local Schools have switched to its red plan, which means they will start the school remotely.

The school says it will release more information of the remote learning plan to parents in the coming days, including the duration of remote learning and academic expectations of students.

A decision will also be made shortly on athletics and extracurricular activies.

The school was originally supposed to start on a hybrid, or yellow, plan.

The board of health also voted Thursday to prohibit festivals or other public gatherings bigger than the 10 person limit put in place by Ohio Gov. Mike DeWine and the Ohio Department of Health.

The vote came ahead of a planned festival within the county with rides and other events, although that specific event was never overtly named.

This order will be linked to the county's status in the Ohio Public Health Advisory Alert system. At this point, Lucas County is in the Level 3 (Red) category.

LOCAL REACTION AHEAD OF THURSDAY'S CONFERENCE

Leading up to the vote on Thursday, many parents found themselves having tough talks with their school-aged children.

"We had a really good conversation with our son and we're really trying to be honest and really be positive with him," Sylvania parent Schuyler Knackstedt said. "I think how we react to everything is really big on influencing how he's going to respond going back to school."

Knackstedt believes that transparency is what will help her second-grader be ready to learn, regardless of the setting. She says the teachers in his district have been great about communication.

However, resident Lou Merlo said he believes the social aspect of school is vital and would like to see schools open back up.

"Parents should make up their minds and do whatever they feel is best for their child. If they don't want their child back in school because they're afraid of the thing, which I can understand, then they should keep them home," Merlo said.

With coronavirus numbers fluctuating throughout spring and summer and a mask mandate in place, it has left a lot of unknowns, even though it's already August.

"Whatever the schools decide, I mean honestly at this point, you know, we're going to make it work," Knackstedt said. "The community has really come together. We've got groups, we have parents who have joined groups online, on Facebook, to help out."