Charlotte Bennett told the newspaper that the governor asked her inappropriate questions about her sex life, including whether she had ever had sex with older men. 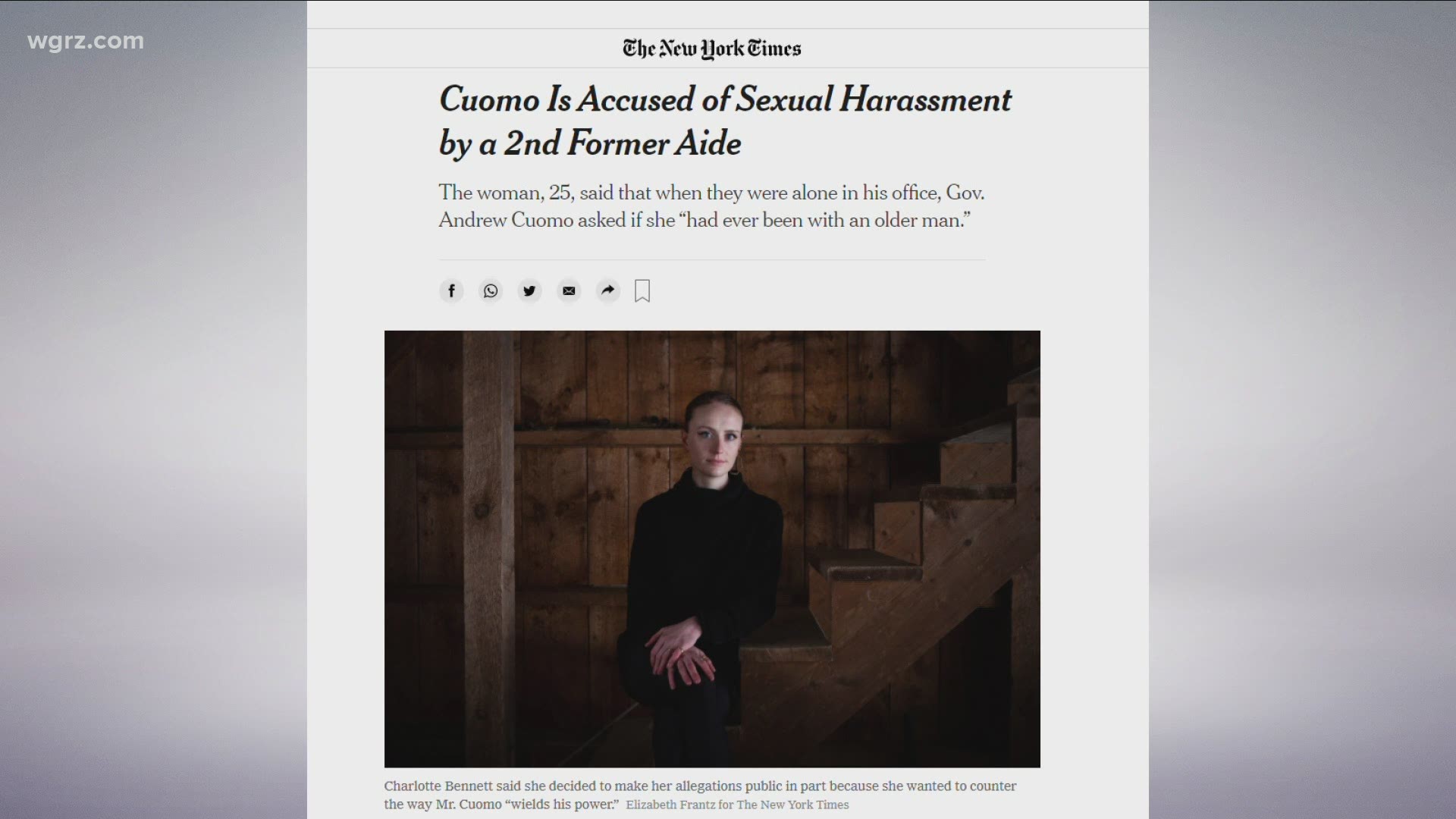 BUFFALO, N.Y. — A second former aide has accused Gov. Andrew Cuomo of sexual harassment, according to the New York Times.

The Democratic governor responded Saturday with a statement saying he never made advances toward her and never intended to be inappropriate.

Charlotte Bennett was a health policy adviser in the Democratic governor’s administration until November. She told The New York Times that Cuomo asked her inappropriate questions about her sex life, including whether she had ever had sex with older men.

In the article, Bennett says Cuomo harassed her last spring as the coronavirus pandemic consumed the state's actions in Albany.

Boylan in December accused the governor on Twitter of harassing her. At the time she did not go into detail and would not take questions.

That changed earlier this week when she posted an essay online and alleged the Governor asked her to play "strip poker" on a plane trip in October of 2017.

She also said Cuomo would comment on her looks, repeatedly touch her, and kissed her on the lips after a one-on-one meeting.

The Governor's Office did respond to that post and called her claims quote "simply false."

Cuomo issued a statement after Saturday's article was published:

"Ms. Bennett was a hardworking and valued member of our team during COVID. She has every right to speak out," he said.

"When she came to me and opened up about being a sexual assault survivor and how it shaped her and her ongoing efforts to create an organization that empowered her voice to help other survivors, I tried to be supportive and helpful. Ms. Bennett's initial impression was right: I was trying to be a mentor to her. I never made advances toward Ms. Bennett nor did I ever intend to act in any way that was inappropriate. The last thing I would ever have wanted was to make her feel any of the things that are being reported.

"This situation cannot and should not be resolved in the press; I believe the best way to get to the truth is through a full and thorough outside review and I am directing all state employees to comply with that effort. I ask all New Yorkers to await the findings of the review so that they know the facts before making any judgments. I will have no further comment until the review has concluded."

Another statement from the governor's special counsel and senior advisor, Beth Garvey, said:

"Ms. Bennett's concerns were treated with sensitivity and respect and in accordance with applicable law and policy.

"The matter was promptly escalated to special counsel. Ms. Bennett received the transfer she requested to a position in which she had expressed a long-standing interest, and was thoroughly debriefed on the facts which did not include a claim of physical contact or inappropriate sexual conduct. She was consulted regarding the resolution and expressed satisfaction and appreciation for the way in which it was handled.

"The determination reached based on the information Ms. Bennett provided was that no further action was required which was consistent with Ms. Bennett's wishes.

"Although in no way required by law, the Governor has requested an independent review and all staff will cooperate in that endeavor. Former Federal Judge Barbara Jones will lead the review."

New York Lieutenant Governor Kathy Hochul added in a statement: "Everyone deserves to have their voice heard and taken seriously. I support an independent review."

The latest allegations about Governor Cuomo’s conduct are incredibly disturbing. The review suggested by someone handpicked by the Governor himself, is an outrageous, completely unacceptable idea.

I commend these brave women for coming forward and speaking out. pic.twitter.com/NJEUAeCOJI