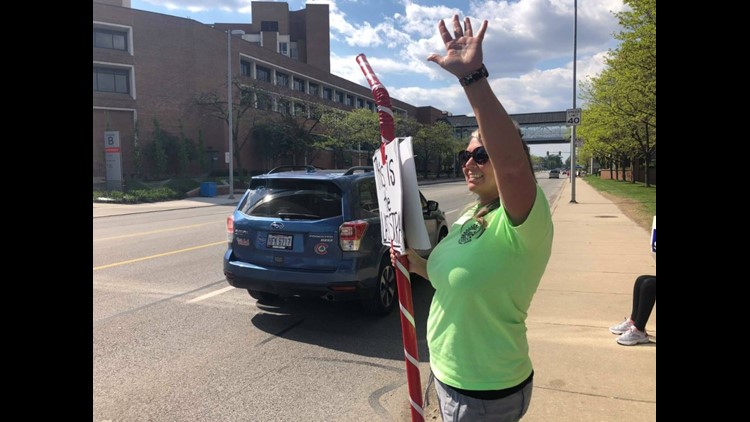 TOLEDO, Ohio — The strike at Mercy Health St Vincent Medical Center continues in it's 10th day. Those 10 days are wearing on the union workers.

One single mother is fighting from the picket line despite struggling to make ends meet.

Lindsay has been a part of this strike since day one. She marched and now stands on the picket line fighting for better health care. The purpose? Her almost three-year-old son Beckett. He was born with club feet.

"I can't even afford to take him to therapy because one visit is $140,” said Lindsay Weills. “And we're supposed to go multiple times a week so it's rough."

Lindsay said her co-pays and deductibles would double, her premium would increase and that there would be no cap on out of pocket costs. That isn't manageable as a single mother.

"It's really rough out here,” said Weills. “But we just have to do what we have to do. We can't give in."

Mercy Health however said this in a statement, “St. Vincent Medical Center and Children's Hospital continues to provide excellent patient care thanks to our team of high-quality nurses and staff, including hundreds of our associates who have returned to work to live our Mission and Values by caring for our community."

That news was discouraging to some on the picket line.

"It hurts because now they are all in there working and making money and we're out here fighting for their benefits for their pay,” said Weills. “Everything and they are still going to get that."

"They will come to see that even the people who went back in,” said Pamela Kluczynski, a sterile processor at St. Vincent Medical Center. “That's not enough to take St. V's to 100 percent. We're top notch hospital and that's how we want to keep it."

UAW leaders say no one will be penalized for going back to work. Union members still on strike say they are confident their leaders will get them a deal that works.

"Our union backers are right there guiding us through every step,” said Kluczynski. “I have every confidence that they will lead us through this dark moment."

Union leaders say there are no negotiations set up for this time, but they are willing to talk.

The hospital has also been on record saying the same thing, yet no meetings are planned.