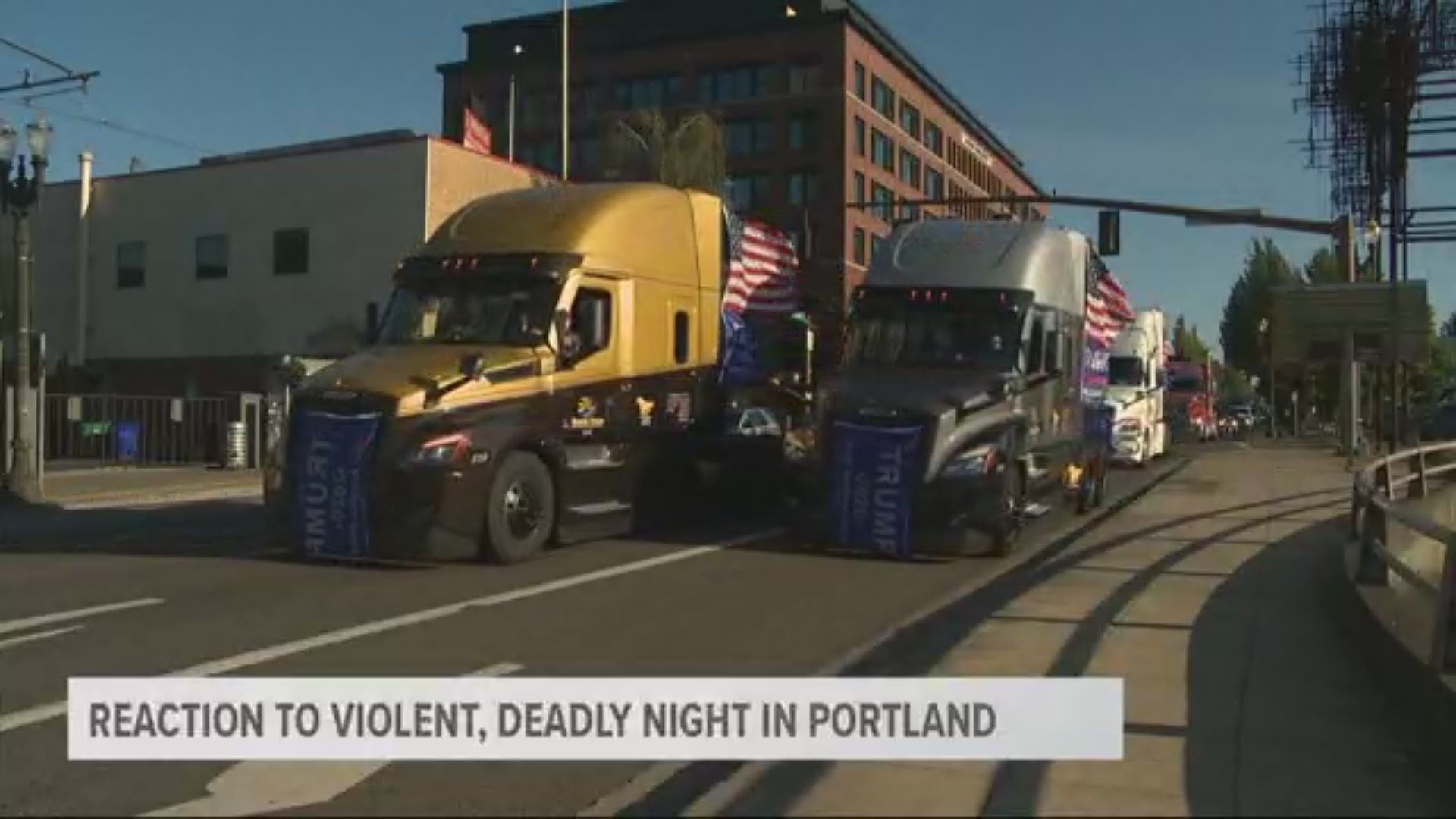 PORTLAND, Ore — No arrests have been made in Saturday night's deadly shooting in downtown Portland, and police say it's unknown if the incident was politically motivated.

Portland police say gunshots were heard at the intersection of SW Third Avenue and Alder Street just before 9 p.m.Saturday. A gunshot victim was found on the ground and pronounced dead at the scene.

The victim has not been identified, but KGW News spoke with Patriot Prayer leader Joey Gibson, who confirmed the victim "was a good friend and supporter of Patriot Prayer." Patriot Prayer is a right-wing group based in Vancouver, Wash. Many of its members, including Gibson, have often come to Portland for various political rallies and protests.

The shooting followed a car rally in support of Pres. Trump earlier Saturday.

Hundreds of supporters donned pro-Trump regalia and American flags as they made their way into downtown Portland from Clackamas Town Center. Portland police say they tried to keep the group on I-5 and away from the downtown core, but some individuals in the caravan made their way to city streets.

Several arrests were made that afternoon, but no other details have been released.

Police say anyone with any information or perhaps video of the shooting to notify an officer or contact homicide detective Rico Beniga, 503-823-0457 Rico.Beniga@portlandoregon.gov or Sergeant Joe Santos 503-823-0406 Joseph.Santos@portlandoregon.gov.

Mayor Wheeler said he will be meeting with local, regional and state law enforcement leaders Sunday afternoon ahead of possible protests and violence that evening.

"There are people on social media who say they are going to come here to seek retribution. Even our police chief doesn't have enough facts to suggest retribution... for what? ...If you're from out of town and you're reading something on social media, they're probably wrong. We don't have facts yet," Mayor Wheeler said.

Multnomah County Chair Deborah Kafoury released a statement Sunday morning, saying in part: "This tragedy will be used to justify escalating violence. It will be used to paint an entire movement with a broad and misleading brush. And sadly, it will be used by the occupant of the White House to deepen divisions and fear."

Commissioner Jo Ann Hardesty also released a statement, and said her office is working on a 30-, 60- and 90-day plan to transition the Portland Police Bureau under her office. When asked about this plan, Mayor Wheeler said he doesn't plan on stepping down, and added there's no chance he would give up his title as police commissioner until January 2021 when the city charter is possibly renewed.

My office is working on a 30, 60 and 90 day plan to transition PPB leadership to my portfolio, and I stand ready for the Mayor to ask me to serve as Police Commissioner.

Gov. Kate Brown also released a statement on the shooting, saying in part: “For weeks, we have also seen small groups of demonstrators from all ends of the political spectrum who are intent on committing acts of vandalism and violence. Tragically, yesterday a life was lost in downtown Portland. We do not yet know the full circumstances of this person’s death. Regardless, a life has been lost, and our hearts go out to this person’s family. We will find those who were responsible, and they will be held accountable.”