Multiple fire departments from three counties worked to fight a large blaze at a recycling facility in northeast Sandusky County on Tuesday morning. 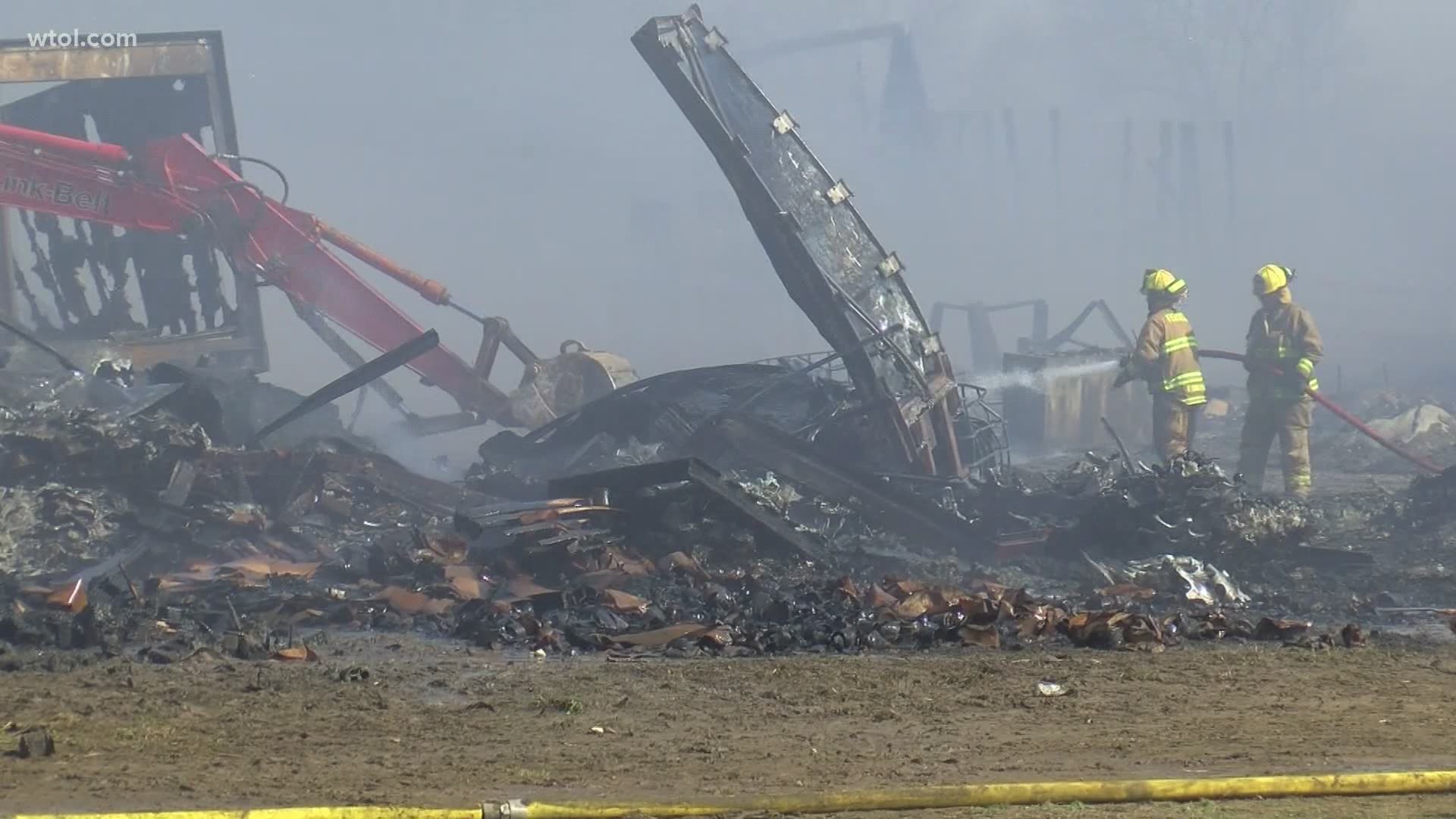 The recycling facility is on State Route 101, just north of the Ohio Turnpike and outside of Clyde. The facility stores and recycles wood pallets.

As of 3:30 p.m., Marietta Fire Chief Tom Johnson said the fire was pretty much over. However, they had to evacuate six trailers with one-and-a-half lost and others left with major smoke damage. There were 15 semi-trailers impacted as well, with nearly have of those complete losses as well.

In addition to the fire at the facility, field fires broke out, with wind cited as a contributing factor.

Crews are expected to be on scene until around 7-8 p.m.

Johnson said that about seven months ago, three buildings and the pallets around them caught fire at the same scene. That incident is still under investigation by the state fire marshal.

During Tuesday's fire, Johnson said plastics basically welded together. Initially, there was a miscommunication from the owner, who said he didn't want crews to do an excavation. However, Johnson said they worked out a deal and were able to get in there and begin that process at around 3:30 p.m. He said water doesn’t really do anything to the plastic, so crews have to pull it apart with an excavator.

Roughly 130 firefighters and 20 fire departments responded, including crews from Sandusky, Erie and Ottawa counties who worked to get the fire under control at Keegan Enterprises in Townsend Township. A good portion of those crews were made up of volunteer firefighters,

According to Ohio Turnpike workers, several roads in the area were closed.

Heavy, thick black smoke could be seen for miles in Sandusky County and beyond. No word as of 11:30 a.m. on any injuries.

This is the bad side of the fire according to the Sheriff’s department. Lots of smoke being blown long distances@WTOL11Toledo pic.twitter.com/i8Wux2gW78

Reached Tuesday afternoon, the owner of Keegan Enterprises said he believes this fire is suspicious. This is the second fire since October and it started in the same place. He said that this time, he lost everything.

During the first fire last year, wooden pallets and plastic on the property were engulfed in flames and the smoke could be seen at least as far as Bellevue. That fire required services from at least a dozen fire departments at the time.

A Facebook post from ProMedica Air and Mobile said, "Our thoughts and prayers go out to the brave men and women fighting a massive blaze in Townsend Township in NE Sandusky County. Several departments from across Sandusky, Erie, and Ottawa Counties are working to bring the fire under control. Several roads are closed in the area."

We'll continue to update you on this developing story on air and online.

Credit: Casey Row
Fire departments from throughout three counties battle a blaze at Keegan Enterprises in Sandusky County on March 30.