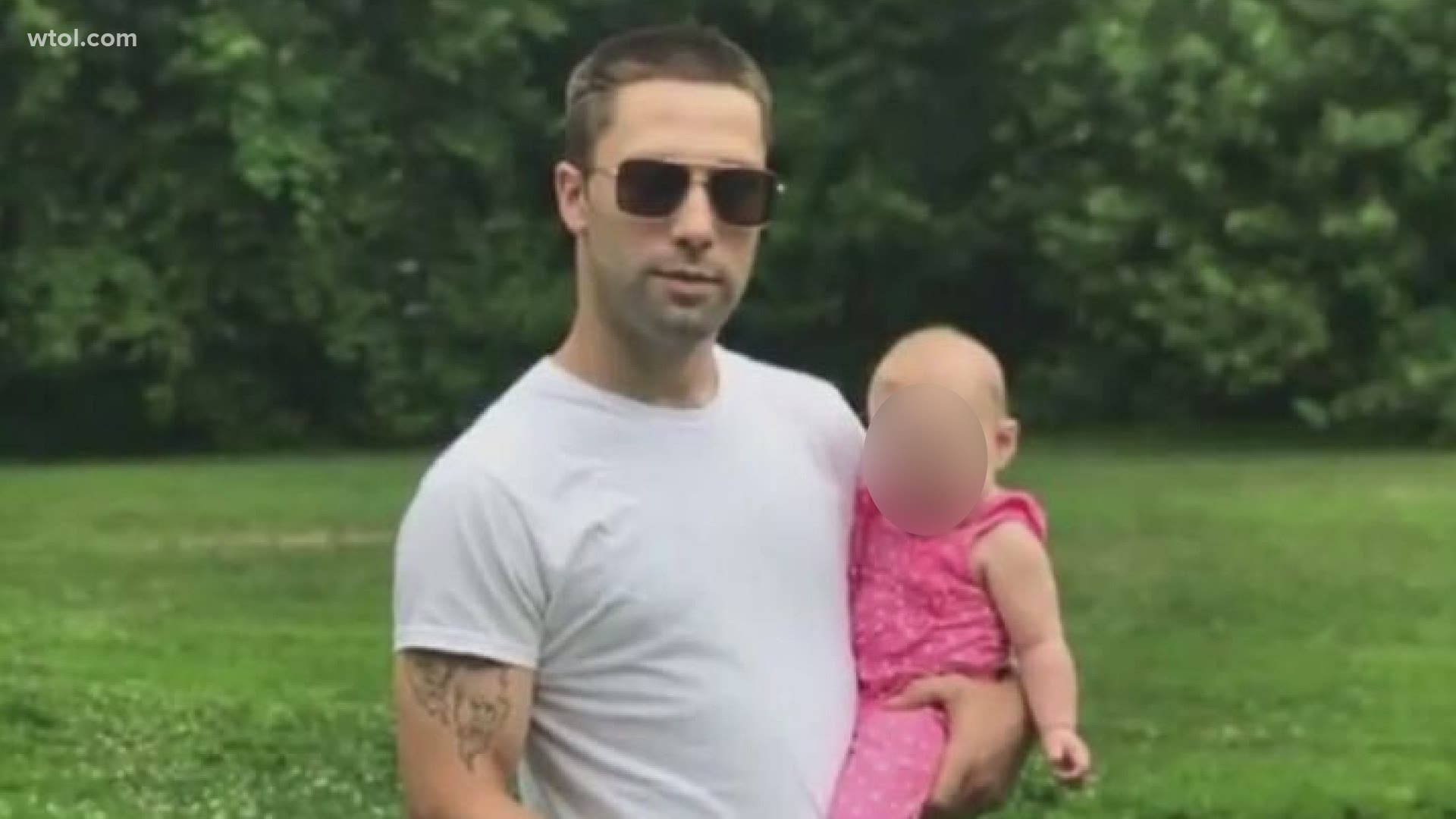 On Monday, it was announced that four sheriff's office employees face disciplinary action in relation to the 29-year-old's death.

Ferguson was booked just after midnight on Friday, Sept. 11 on charges of burglary and aggravated theft.

Less than 24 hours after his booking, Ferguson was found unresponsive.

The report provides a summary of the following events:

Upon arriving at the corrections center, Luettke talked to Ferguson and cleared him to be booked off of observation and questioning only. During that process, Ferguson told the nurse he had been exposed to someone with COVID-19 and had used heroin and fentanyl a day or two previously, according to a sheriff's office report.

Luettke placed Ferguson on a COVID-19 precaution, and the inmate was then cleared to be booked.

According to the sheriff's office report, the nurse documented the following on Ferguson's intake medical screening form:

"Pt. (Patient) reluctant to answers any questions relates to using a large amt (amount) of heroin/fentanyl "yesterday," and it made Pt. very tried.)"

The nurse also noted, per the report, that Ferguson defecated and urinated on himself and appeared to have trouble keeping his eyes open.

Corrections Officer Ishmael Shine reported having seen that Ferguson's breathing was abnormal while sleeping, though he never pressed the emergency button or informed the officer he couldn't breathe, according to police records.

The report states Shine told Luettke that Ferguson's breathing was abnormal and that he looked dead to him, and asked the nurse if she could check on the inmate.

Shine also asked the nurse if it would be possible to give Ferguson electrolyte packs with water since he seemed to be struggling to breathe. The officer said Luettke told him to give Ferguson some water, according to the report.

The report describes video footage showing the nurse asking the officer if the inmate was breathing, to which Shine replied that he was breathing but looked dead.

"Nurse Luettke replies, 'He (Ferguson) didn't look good sitting there. I mean, whether it's Fentanyl or whatever he had is making him sleepy," the report reads. "Shine then says, 'He is breathing really fast.' Nurse Luettke then asks, 'Does he have water?' C/O Shine states, 'No, should I give him some?' Nurse Luettke answers, 'Yes, because he may be dehydrated,'" the report read.

About five hours after Ferguson's arrest, Luettke gave him Tylenol and water, according to police records.

While in his first cell, Ferguson had to change his uniform several times because he kept soiling them.

The next day, at 7:29 p.m., the inmate was transferred to a different cell.

The report says Corrections Officer Owensby immediately called the nurse station after talking to one of the inmates and requested Ferguson be seen by a nurse. The report adds that jail staff had reported Ferguson was having leg pain and trouble breathing earlier.

Nurse Willoughby responded to Owensby's request by saying no and that medical staff had seen Ferguson earlier and he wasn't complaining about anything, according to the report.

The report states that Toledo Fire and Rescue Department crews responded, giving CPR and medical aid and then, transporting the inmate to the hospital, where he died.

"Eighty-four minutes after C/O Owensby called the Nurse station and spoke with Nurse Tammy Willoughby, Mr. Ferguson was found unresponsive in his cell," the report read.

RELATED: 'Being in the jail shouldn't be a death sentence' | A mother speaks out following Lucas County inmate's death

Corrections Officer Ismael Shine spoke with Luettke after Ferguson was booked, and told her that Ferguson "looks dead to me, and his breathing is abnormal."

Despite receiving this information, Luettke did not check on Ferguson. She told Shine to give him some water and left the booking area.

Luettke did return to booking at around 5:30 a.m. to conduct a medication pass. During that time, she did check on Ferguson.

Director of Medical Services Anissa Floure stated in her assessment of Aaron Ferguson's booking intake on Sept. 11, that there were two red flags initially when he was booked in. She said:

When Floure was asked about Luettke's response to Shine's observation, Floure said that Luettke should have gone and checked on him.

Luettke explained that she initially associated Ferguson's condition with COVID-19. She went on to say that she thought Ferguson's trouble breathing was connected with the fact that he was having gastrointestinal discomfort.

When asked, "Is it important that anytime an inmate or anyone in this corrections center complains about not being able to breathe to check on them?" Luettke answered, "Absolutely."

The Intern Affairs report states that Willoughby should have had Ferguson brought to medical when told by Corrections Officer Kimyatta Owensby that he was having leg pain and trouble breathing.

Floure, along with the interviewed nurses, was asked the following question:

"Is it important, even though you have checked on an inmate’s breathing complaint, that if the same inmate complains later about a difficulty with breathing, is it imperative to check on them again?"

With a complaint like this, the report states that Willoughby "should have allowed Mr. Ferguson to come down for nurses' call when C/O Kimyata Owensby reported Mr. Ferguson's complaints to her."

Willoughby was asked to submit a detailed report for the incident. The report she submitted reportedly lacked details of her actions before the medical back-up call, and did not provide detailed information about the phone call with Detective Sergeant Waters and Corrections Officer Owensby.

Internal Affairs concluded that this report was "inadequate and evasive" and didn't even mention Ferguson by name.

During one of Wiloughy's Internal Affairs Interviews, Detective Sarahman read and showed her the reports submitted by Waters and Owensby. When Sarahman was finished reading those reports, Willoughby claimed they were not true.

In her assessment of medical back-up for Ferguson, Floure stated that several calls were made to the nurse station from officers about this inmate complaining of medical issues, saying he needed to be assessed. Those calls went unanswered.

Floure went on to say that when there is a medical emergency, it is the responsibility of everyone to respond in a timely manner.

"Willoughby was negligent in her duty when she failed to allow inmate Ferguson to come down during nurse's call after being made aware of inmate Ferguson complaining of leg pain and trouble breathing. Nurse Willoughby was also not truthful during her questioning in Internal Affairs about what was said during the phone call with C/O Owensby and D/S Waters present."

It went on to say:

"The preponderance of the evidence presented in this case warrants a finding of sustainment on all of the charges levied in this case."

"Lt. John Leach will review D/S Steven Mowery's actions while encountering Ferguson during his arrest and transport to the Lucas County Jail. Leach will issue guidance to D/S Mowery as to when he is to notify EMS during a custodial encounter and report any other recommendation to Internal affairs."

In regard to Corrections Officer Timothy Vining, the report stated:

"C/O Timothy Vining violated rule#44 logs when he marked that he made three rounds and the rounds were not completed, along with missing two rounds that should have been made."

"CNSLR Holly Garrett, who was in on recall as a corrections officer at the time of the incident, violated rule#44 logs when she marked that she made four rounds and the rounds were not completed."