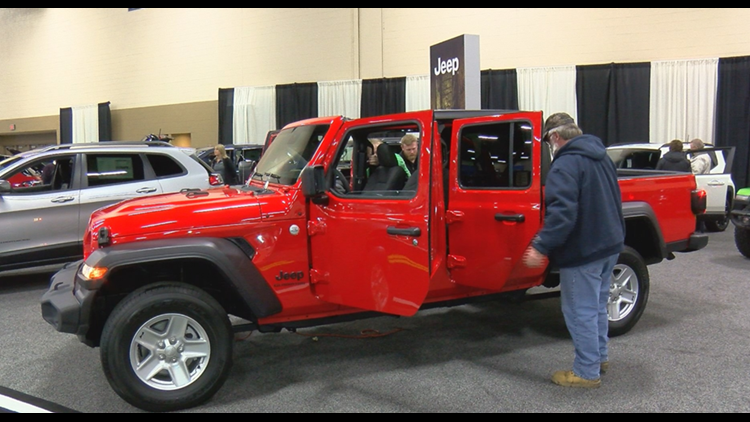 TOLEDO (WTOL) - Ever since it was debuted in Los Angeles in November, people far and wide have been excited to see the brand new, Toledo-built Jeep Gladiator.

This weekend, they finally have their chance to at the Toledo Auto Show. On Friday, some folks who checked out the truck said it definitely lived up to the hype.

“This is cool,” said Terry Phillips of Port Clinton. “I mean it's got enough retro that it just clicks, you know?"

The Gladiator drew dozens of fans Friday, some casual, others more die-hard like Jeff Robinson.

"It's an excellent vehicle,” Robinson said. “It's about time that they totally utilized the Wrangler function here where you can go off-road, you can recreationally use it, you can take your motorbikes out with it."

Phillips and his wife, Vicky, were highly impressed when they got their first in-person look at the truck. They said they'll buy one eventually, but maybe wait a few years.

"I've been following it for, it seems like two years, you know? Isn't it cool?” Terry Phillips said.

The hometown pride isn't lost on these Jeepers. The Gladiator isn’t only built in Toledo, but each vehicle will have a “Heart 419” stamped in the truck’s bed.

“There’s so much to brag about being from Toledo,” Robinson said. “Whenever I travel around the United States or abroad, it’s neat to be able to brag about the Jeep.”