Suni Lee’s road to Olympics paved with sacrifice and tragedy

The St. Paul native won gold in the all-around after helping Team USA to a silver in the team competition at the Tokyo Olympics. 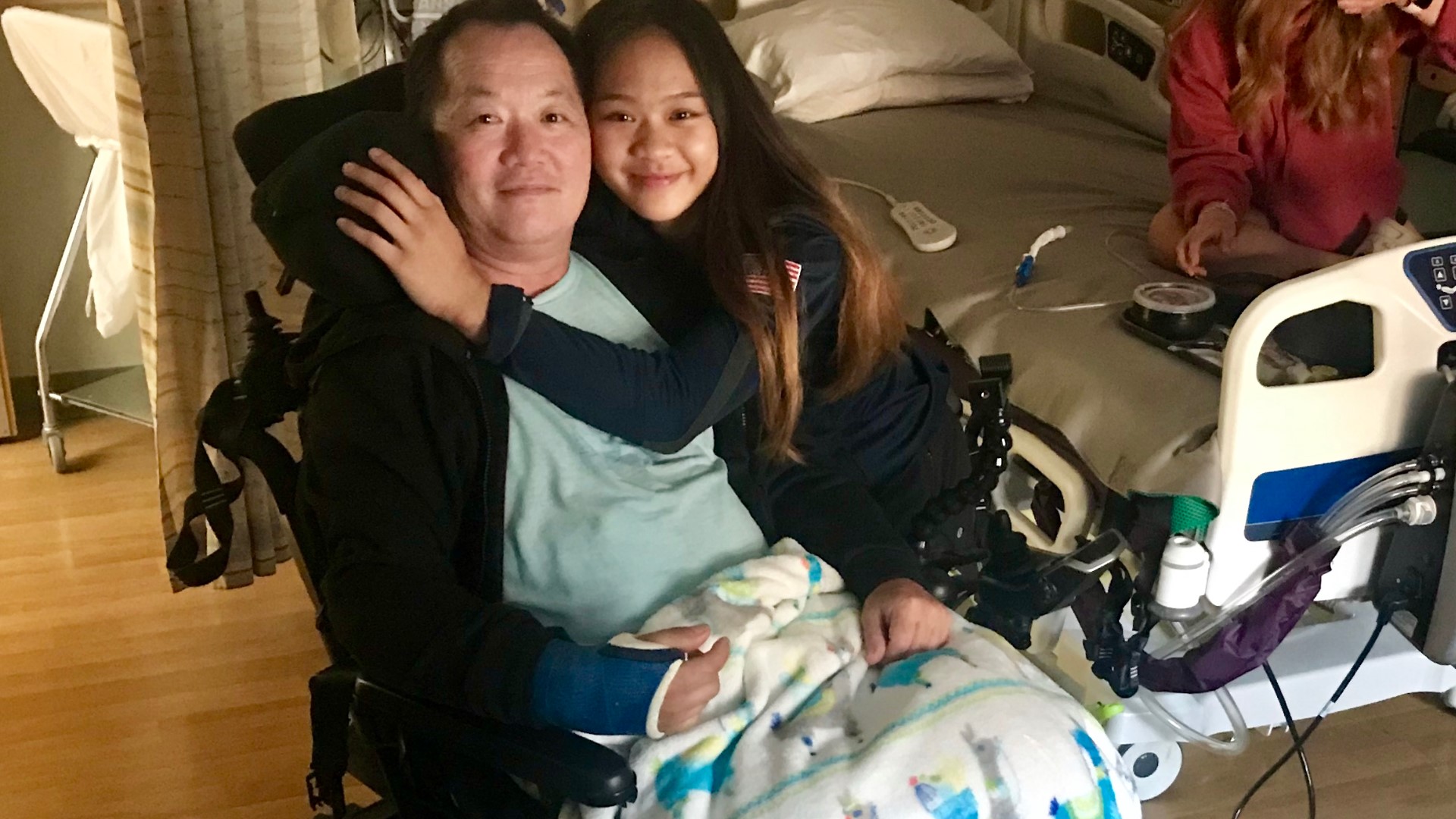 EDITOR'S NOTE: This story originally aired on Sept. 24, 2019. On Thursday, July 29, 2021, Suni Lee won the gold medal in the all-around at the Tokyo Olympics. She also helped Team USA to a silver in the team competition.

ST PAUL, Minn. — To be judged, not yet two months ago, as the second-best all-around female gymnast in country is to know a few things about balance.

Sunisa Lee has always found her best balance with her dad.

“Me and my dad definitely have the closest bond out of everyone in my family,” Sunisa says.

Rarely does John Lee miss one of his daughter’s gymnastics meets, at home or on the road.

So, how strange it seemed that he was absent last month from the U.S. National Gymnastics Championships at which Sunisa finished second overall – just behind four-time Olympic gold-medalist Simone Biles.

In truth, nothing could have kept John away.

“The last thing I remember is I woke up in the hospital,” Sunisa’s dad says from a wheel chair in the spinal cord injury unit at the Minneapolis VA Medical Center.

Two days before Sunisa left for nationals, John was helping a friend cut a limb from a tree, when he fell from the ladder.

“According to the doctor, I'm pretty much paralyzed from here down,” John says, holding his hand to his chest.

John, a Navy veteran, has spent the past five weeks at the VA, after two previous weeks at Regions Hospital in St. Paul.

It was in the intensive care unit at Regions that John watched on television, alongside his wife Yeev Thao, the national championship that sent Sunisa home with the overall silver medal. In her favorite event, the uneven bars, Sunisa won gold, finishing ahead of even Biles.

“I was in tears seeing my daughter up there with Simone Biles,” John says from his hospital room.

Days earlier, Sunisa’s coach, Jess Graba, had considered pulling her out of nationals. How, after all, could she stay focused so soon after her father’s accident?

Sunisa’s dad insisted she make the trip to Kansas City to compete.

“She’s worked so hard for this,” John says. “I tell her don’t worry about me, just go and do well.”

Sunisa admits, even she had her doubts. “I wasn't in the best place, I guess, going into it, but I just kind of switched gears and competed for my dad.”

Graba says he followed the lead of Sunisa and her parents. “It didn't surprise me that she was able to do it,” he says. “She's just such a tough competitor, she's a tough kid.”

Of that, there’s plenty of evidence.

Like her gymnastics, Sunisa’s days are an exercise in balance.

And balancing nights at home spent caring for her younger siblings so her mom can visit her dad at the hospital.

All the while, Sunisa has stayed focused on her goals.

This past Sunday in Florida, Sunisa cleared her latest hurdle when she qualified to represent the United States at world competition next month in Germany.

Last week, before departing for Florida, Sunisa stopped at the hospital to visit her father.

John greeted his daughter with a hug. “Whether you win first, or not, you're still number one in my book,” he told her.

A high-five followed. “You’ve got this,” John told his daughter.

Should Sunisa continue reaching her goals, next year she will become the first Hmong-American to earn a place on an Olympic team.

“It's been my goal for ten years, Sunisa says. “And now it's coming up so soon.”

And while Sunisa works, her dad does too – Sunisa in the gym and John in therapy.

He hopes to go home soon. The VA has already installed a ramp leading up to the front door of the Lee’s St. Paul home.

Yeev Thao hasn’t given up hope for her husband. “We’re praying that he will walk again,” she says.

But even if John doesn’t, don’t expect him to miss any future Olympic appearances by Sunisa.

“I will definitely be there, there's nothing stopping me,” John says, flashing a smile. “I'll crawl to Tokyo.”

RELATED: Meet the six women gymnasts representing the US in Tokyo