All of the trucks will have a Heart 419 embedded into the bed to pay tribute to Toledo.

LOS ANGELES (WTOL) - After months and months of waiting, Jeep’s new Wrangler pickup has finally been released from its wraps.

And today, we finally know its official name -- meet Gladiator, the new Jeep vehicle that will be built right here in Toledo. 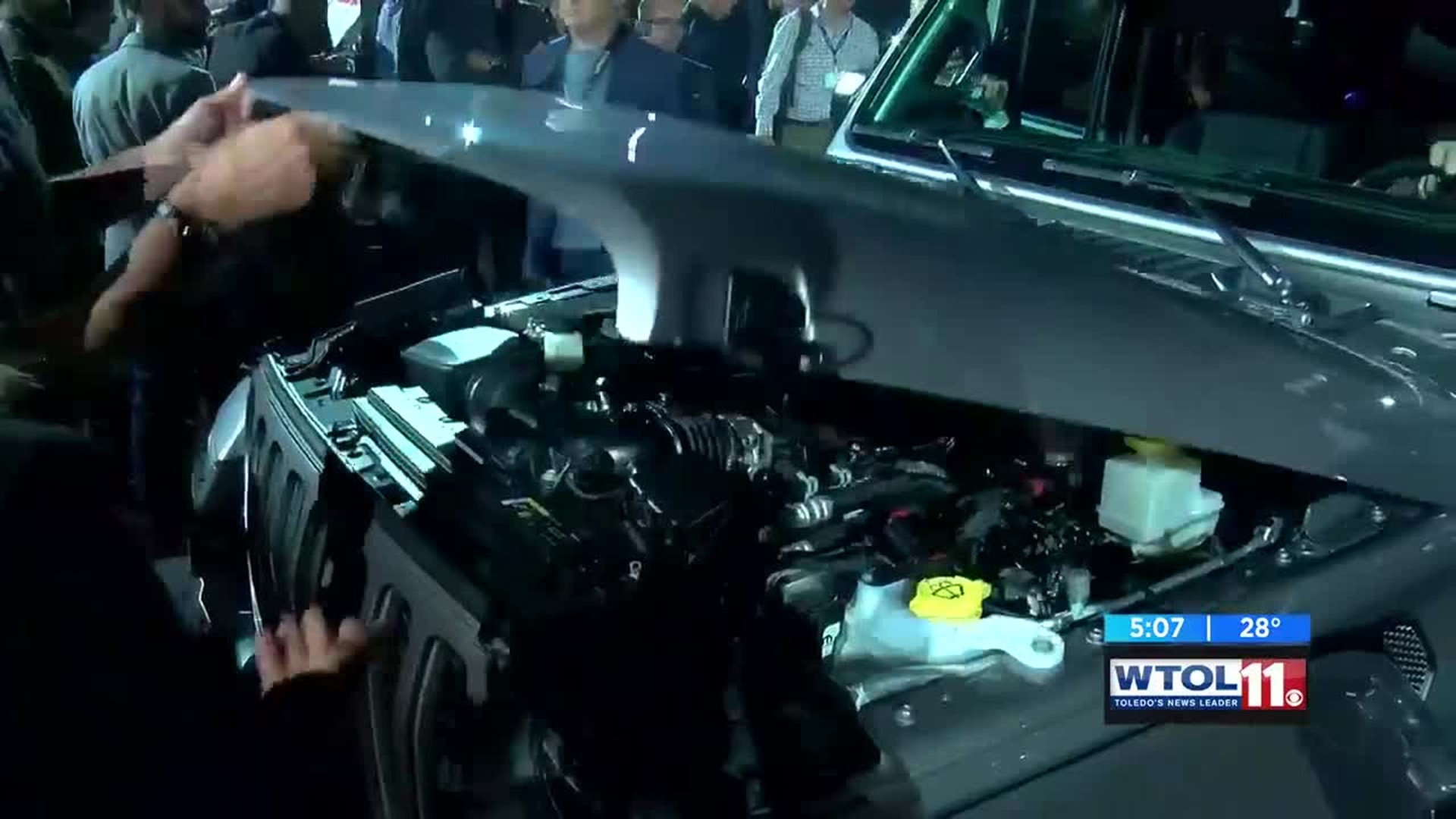 The new pickup was unveiled this morning at the Los Angeles Auto Show.

The all-new Gladiator is built in Toledo, the historic home of Jeep, and will be in showrooms in the second quarter of 2019.

And it’s no surprise that Toledo takes so much pride in its Jeeps. So much so that Jeep decided to add this: A heart-419 embed in every single one of these Jeep Gladiators.

Each Jeep Gladiator will pay tribute to its ancestral Toledo home with a "heart 419" molded into its truck bed.

“Beyond excited. It means a great deal to not only the people who work there but the surrounding community, so it’s awesome,” said Anthony Long, Toledo Jeep process improvement manager, who was on hand for the reveal.

The new truck will be fully assembled in Toledo’s north plant where the Wrangler is currently built.

The Gladiator will be able to tow nearly 8,000 pounds and hold 1,600 in its bed. It’s four doors with a similar front body to the Wrangler, which was on purpose, according to Taylor Langhals, Jeep’s lead exterior designer, who designed it.

“For us it almost makes it a little bit easier to have such a strong brand heritage that we can work with,” Langhals said.

For UAW Local 12 Jeep Chairman Mark Epley, the Gladiator symbolizes another step in the right direction for the company, and he’s excited to see it built in Toledo.

“We had trucks in the past, but this is actually a Jeep truck, so this is pretty cool. It looks like the Wrangler," Epley said. "We’re really excited about it. It’s got all the capabilities like they explained. It’s ready for the market and we’re gonna be doing a really good job at selling them.”

We are LIVE at the Los Angeles Auto Show with Tyler Paley WTOL at the Jeep Gladiator unveiling.

Before today, there has not been a whole lot to see, aside from “spy photos” of what appeared to be the covered-up vehicle, captured throughout the area.

“There is tremendous demand for this unique vehicle from our loyal Jeep customers and pickup truck buyers everywhere,” said Tim Kuniskis, Head of Jeep Brand – North America. “Born from a rich and proud heritage of tough, dependable Jeep trucks, Gladiator combines rugged utility, versatility and functionality, resulting in the most capable midsize truck ever,” on FCA North America’s corporate blog.

FCA notes that the pickup features a modern design that is instantly recognizable as a Jeep with its iconic keystone-shaped grille, a fold-down windshield, easy-to-use premium soft top and two hardtops.

FCA says it also offers unmatched off-road capability and advanced fuel-efficient powertrains, up to 7,650 pounds of towing capacity and up to 1,600 pounds of payload capacity in the five-foot steel bed.

Inside the bed, there’s available under-rail bed lighting, an available covered external power source and strong integrated tie-downs. Inside of the cabin, and exclusive to Gladiator, the rear seats feature segment-leading rear legroom and utilize a unique design that can be locked in place to provide secure storage behind the seat back. The rear seats can also be folded flat to access cab-back storage.

The Jeep Gladiator Rubicon edition rolled onto the scene Wednesday at the Los Angeles Auto Show.

Excitement is palpable at the plant where the truck will be put together.

“We’re building it here,” Toledo assembly complex manager Chuck Padden said. “It’s a beautiful vehicle. All reports are it’s hitting all the marks that everybody wanted to see.”

“It’s gonna be an awesome vehicle,” said Vickie Marino, a plant employee. “I don’t really know anything about it because I haven’t seen it yet, but what I’ve heard about it from people that are working on it, it’s awesome.”

“I know a lot of my fellow union members were concerned that, you know, they talked about maybe moving the Wrangler,” Franks said. “That’s a big part of Toledo. So it’s nice that FCA saw the value in our workforce and decided to give us an additional product to replace losing the Cherokee.”

“So as long as we have jobs here in Toledo, it strengthens the community altogether and we just all grow stronger together,” Padden added.

Padden said you need to look beyond the 5,600 employees at the plant itself to understand just how large the economic impact is and will continue to be.

The Los Angeles Auto Show runs Friday-Dec. 9 at the Los Angeles Convention Center. The new vehicle releases are scheduled to occur now through Thursday, according to an auto show news release.