We asked and you shared. | Here are some of the testimonies of those who attended the protests on May 30 that ended up turning violent.

TOLEDO, Ohio — Hope that quickly turned into disappointment; that's how 24-year-old Marine Corps veteran Chase Keller described the atmosphere in downtown Toledo on May 30 during protests in the wake of George Floyd's death.

Demonstrations started at 3 p.m. in front of the Safety Building when advocates fighting for racial justice began their speeches.

They first asked for positivity throughout the day and warned they "wouldn't have" anyone trying to break the unity they were seeing up to that point.

Activists had one main request: feel their pain.

"In order for all lives to matter, then Black lives have to matter," one Black activist said through the megaphone.

Then, protesters were ready to march along a perimeter around the Safety Building - or at least, they say that was the plan until violence arose on Cherry Street.

"As soon as we started coming up Cherry, they came off on one of the side roads with this huge tank truck and there was a guy with a gun who was shooting off rubber bullets and wood pellets from the tank truck, and they had cruisers lined up all across the street," Bowling Green resident who attended the protest, Shelby Hiller, said.

We asked our viewers who attended the protests in Toledo to share their experiences, videos and photos with us. We also reached out to a Toledo police officer who was on the ground. Each one gave us a different perspective on how the day played out, but all said that from the get-go, they thought the day would end peacefully.

"We expected that, kind of how the beginning portions of it went, that there would be people outside, there'd be a lot of chanting and screaming, things of that nature, but that it would just eventually break itself up into a peaceful day," said Sgt. Joe Okos, a combat veteran who has been with TPD for 14 years.

Okos said he came into work that day just before 5 p.m. and monitored the radio, listening to the initial calls coming in about where the protesters were marching. When protesters arrived at Bancroft and Cherry streets, that's when he heard other officers ask for authorization to engage with "gas or less-lethal devices because they were breaking out the windows on a police car," he said.

Okos described protesters spray painting the Toledo police union hall, and throwing rocks, bottles and other objects at him and other officers.

Meanwhile, Keller, the Marine Corps veteran, recorded a video in which an officer is seeing swinging his helmet at a young man.

"At that time, I had seen the officers. They were coming up onto the sidewalk. They were infringing on rights. They told us, 'Clear out the streets,' and we complied. We got out of the area and we were on the sidewalk, practicing our constitutional rights," Keller said. "And I saw a couple of officers getting physical and starting to push and shoot at people's feet. And I started taking out my cell phone. That officer took his helmet, which I thought was really unusual."

You can see the video he recorded below: 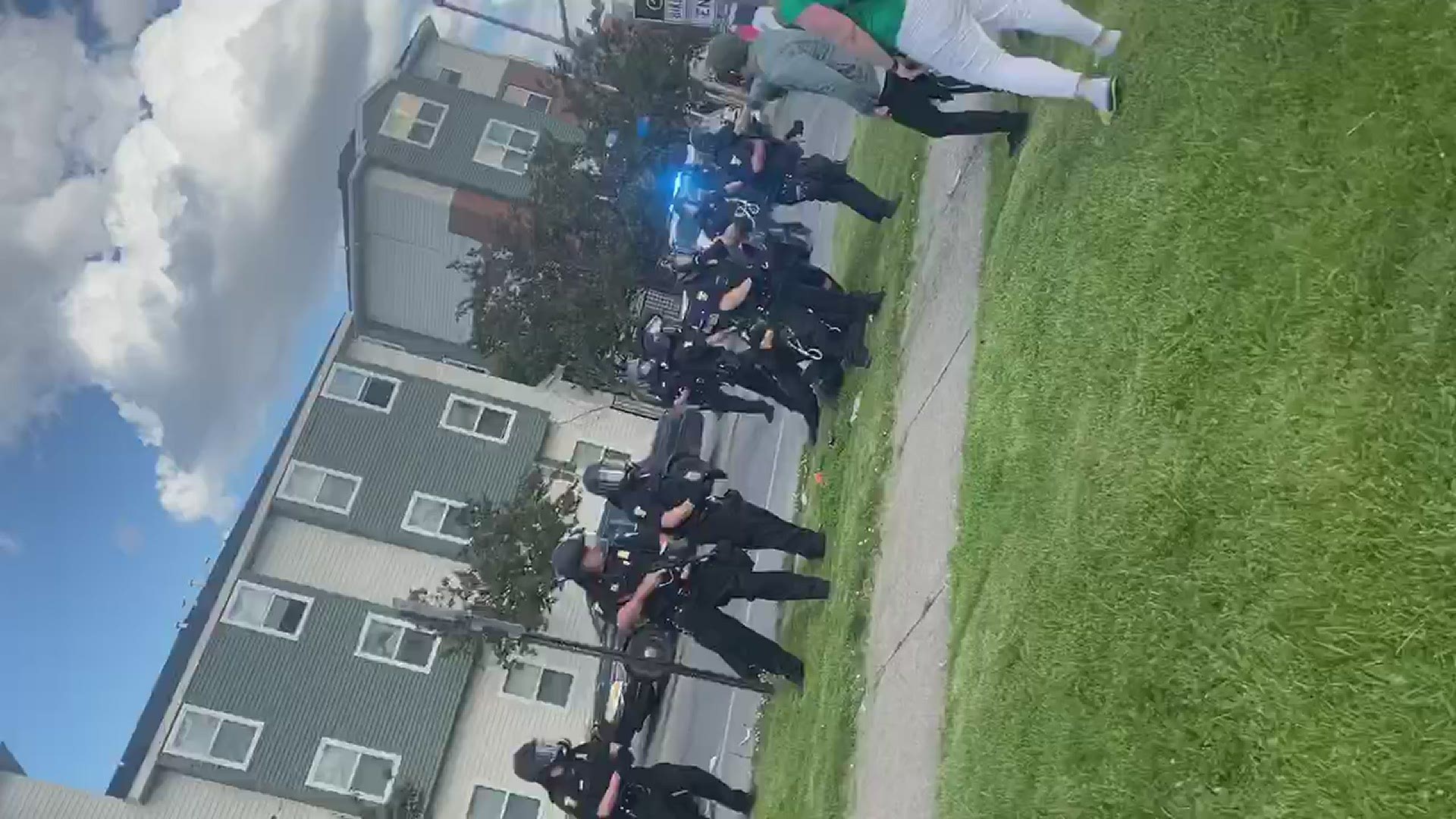 "They were detaining the young man. There were about two to three officers on him already. And then, Officer Melvin Russell took his helmet off and used it to bludgeon in that man. That's assault. There's no way in any shape or form of a textbook that says use your helmet to assault citizens that you're supposed to be serving and protecting," Keller added.

Toledo police released a statement on June 1 saying, "that it is possible there were examples of officer misconduct."

About two weeks after the protest, Officer Melvin Russell, who was caught on video, was put on desk duty. That Wednesday, TPD announced he was officially disciplined.

Following an internal investigation, Russell received a 75-day suspension and signed a Last Chance Agreement, which means if the officer were to receive another complaint regarding use of unnecessary force, he could be terminated.

The agreement will be in effect for five years.

RELATED: 3 Toledo officers disciplined for actions during May 30 protest-turned-violent

Keller wasn't the only one who said they witnessed the officer striking his helmet on the man's head.

Hiller said she had seen the young Black man standing up to anyone trying to throw objects at police. Then, she described seeing about eight officers behind him while another officer ran up and bum-rushed him, grabbing him by the elbows and shoving them down.

She added that she saw one of the officers punch him in the face before the man was struck with the helmet.

"We were all screaming at them (officers) and trying to pull them out, but they started shooting rubber bullets at us. So anybody who was trying to pull it out and get him free got hit, and had to run," she said. "I watched him be arrested and put into a patrol car and he had literally done nothing. He was trying to protect the police and he was standing, breathing just the way we are right now."

Hiller added that she had been gassed and hit by a rubber bullet and a wood pellet while witnessing many others get hurt in the same way. No EMT or medical personnel arrived to help any of the injured, she said.

"They had people on the ground who were medics who had had history with medical stuff that had backpacks full of bandages and things. And then all they had were water and baking soda. A friend of ours actually drove up and brought us 15 gallons of milk to help rinse people's eyes out," she said.

Okos said officers called for help from the fire department to tend to the injured, but traffic was blocked by protesters, making it difficult for help to arrive.

Hiller said she was gassed a handful of times; the last time being the worst one. She described finally being in the green space in front of the Safety Building with other protesters, taking a knee and chanting, "hands up, don't shoot."

After that, she said the crowd dispersed and the rioting started. She followed the destruction for a few blocks and handed out what was left of the milk her friend had brought.

Hiller said she finally left because her daughter was home and she couldn't risk getting arrested.

Shareen Strozier attended the protest after driving by another demonstration on Secor Road that day. She said she was mortified after leaving the protest when it got violent.

Strozier saw more of the violence after having to drive through downtown to get to east Toledo with her children in the car.

"I saw just a lot of back and forth yelling and I saw way more police cars than I think I've ever seen in my life. I saw police in full body armor with shields and helmets and everything like that and it just scared me. I didn't know how that was going to end up and I'm glad it didn't end up any worse than what it did," the Toledo native said.

Strozier said she was surprised to see violence from police in Toledo. The events that took place on May 30 composed a setting she described as hurtful and jarring — a sentiment echoed by Keller and Hiller.

"The day went from one of hope to one of anger and demanding reform. I'm angry. I want accountability. I want them to stop hiding behind a badge. I want transparency and I just want them to be serving the people. No longer harassing and abusing their power and station," Keller said.

You can check out the full testimony, as well as photos and videos, of some of the protest attendees who reached out to WTOL 11 below: 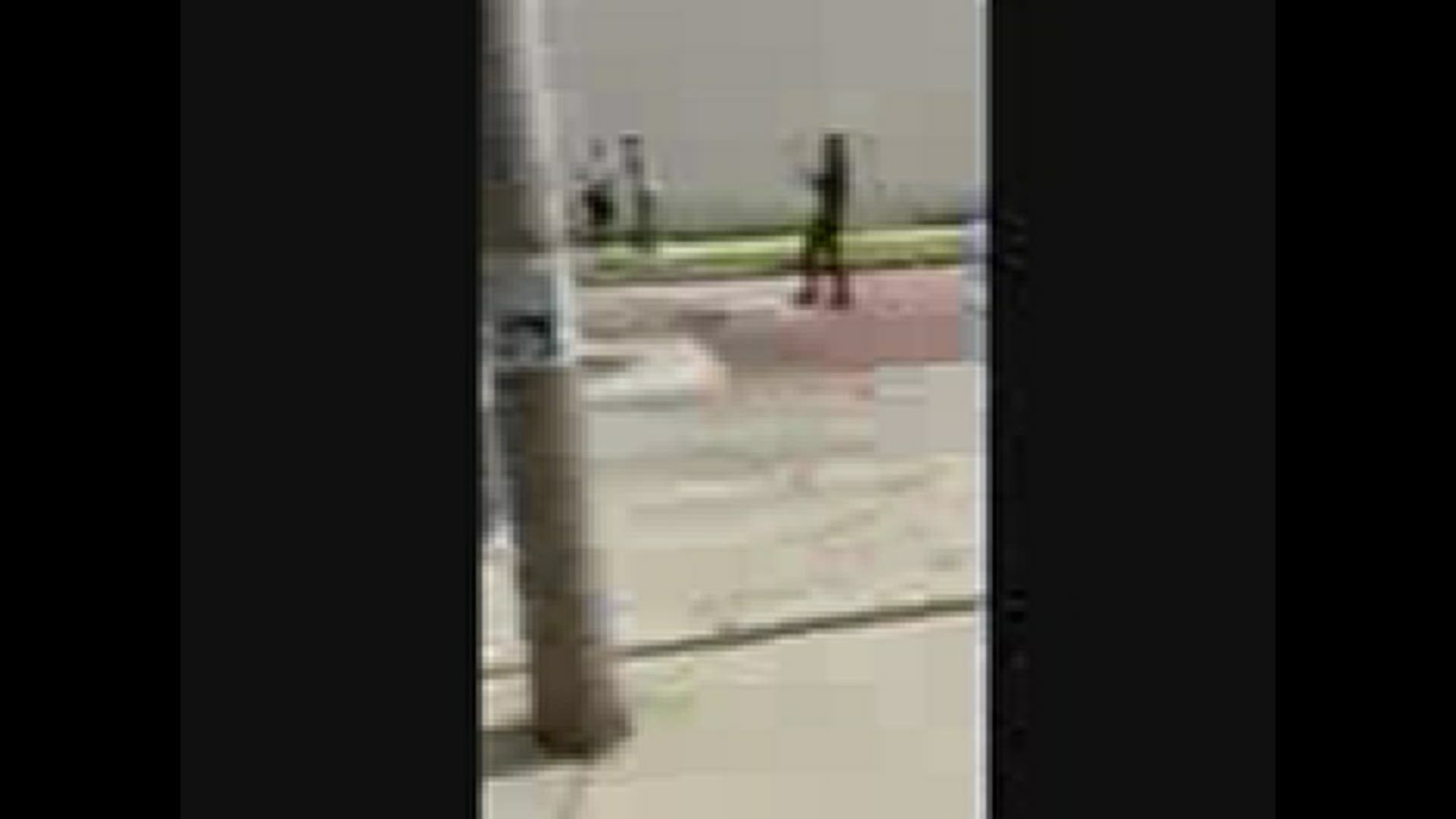 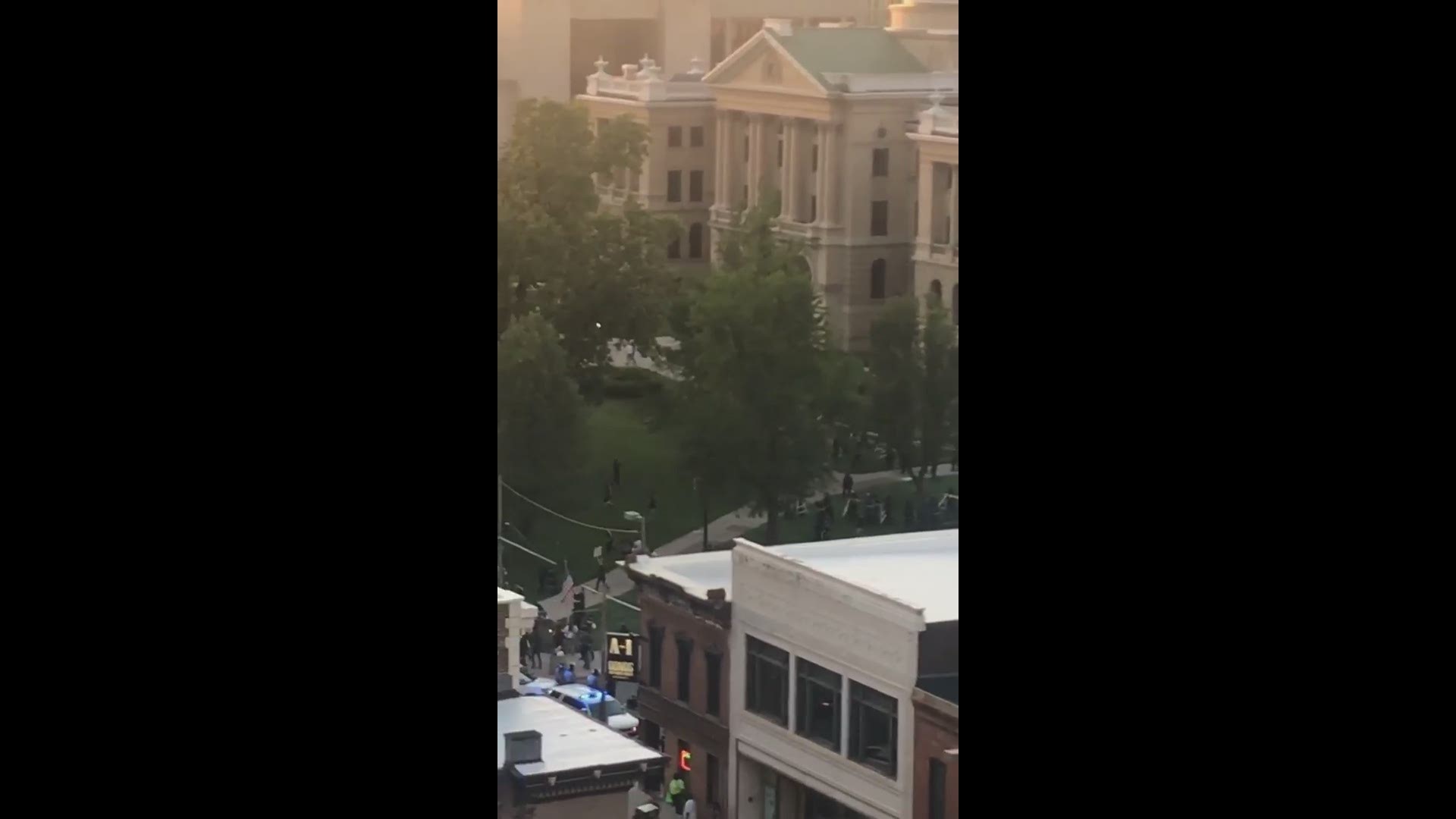 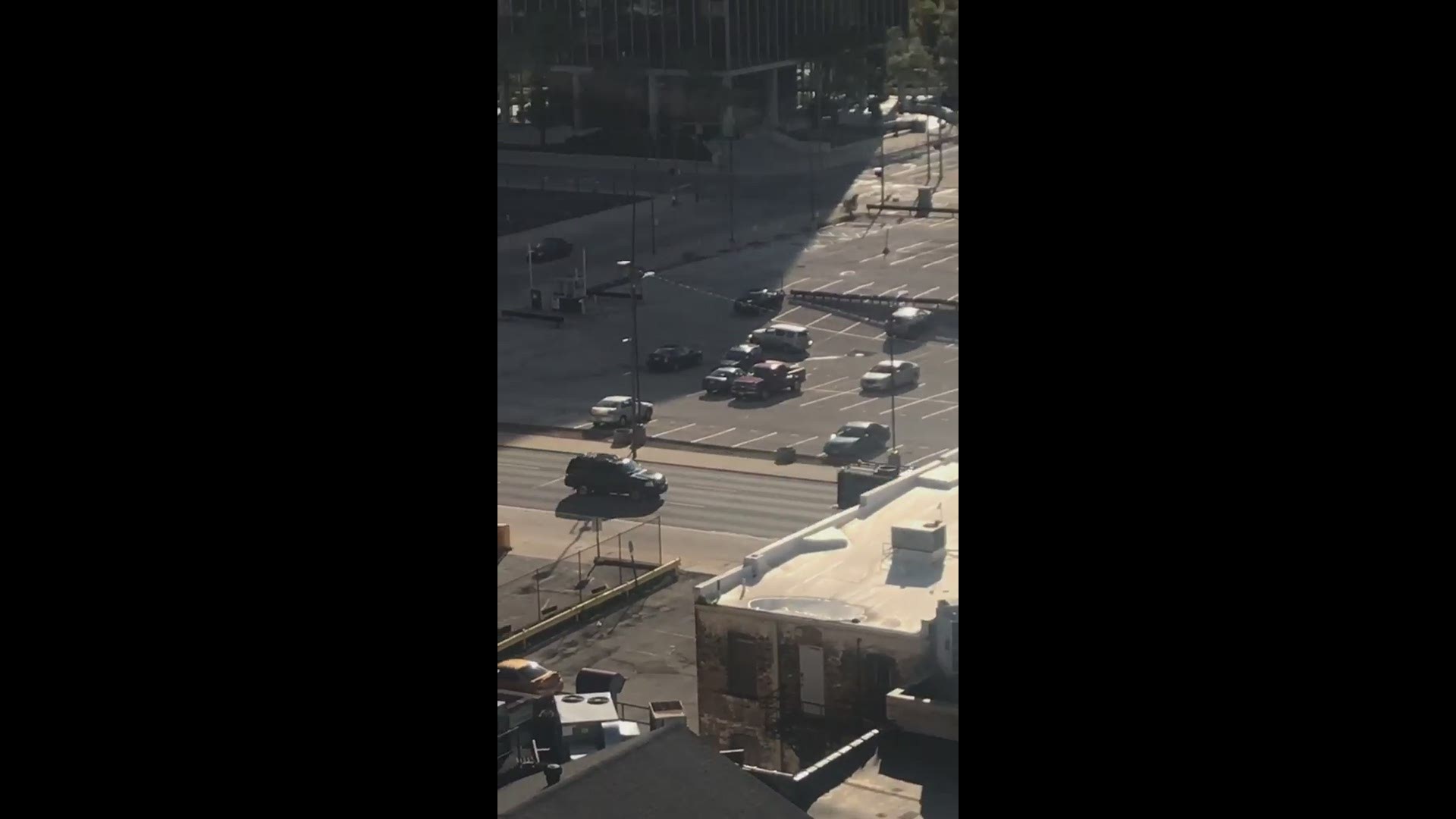 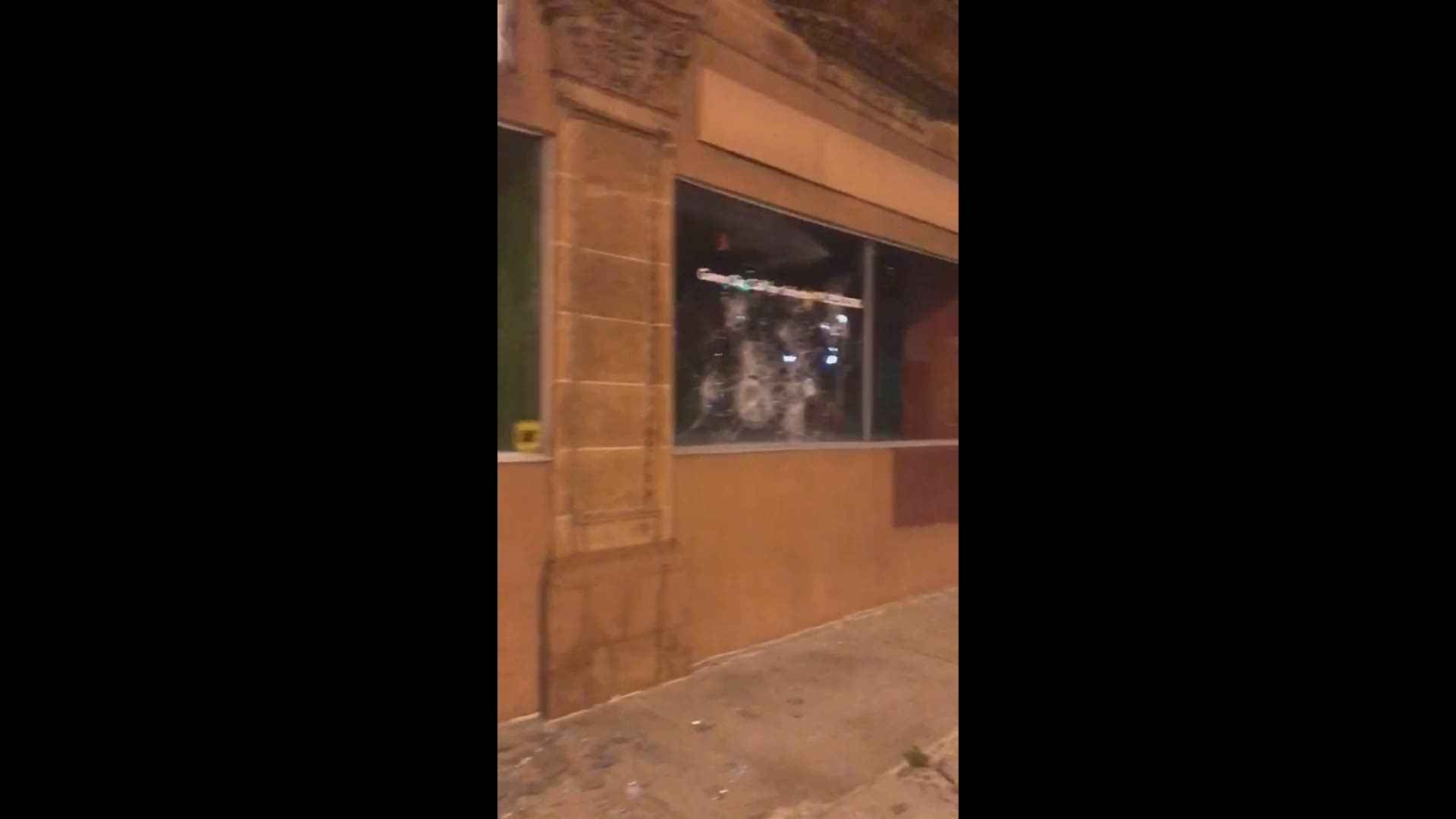