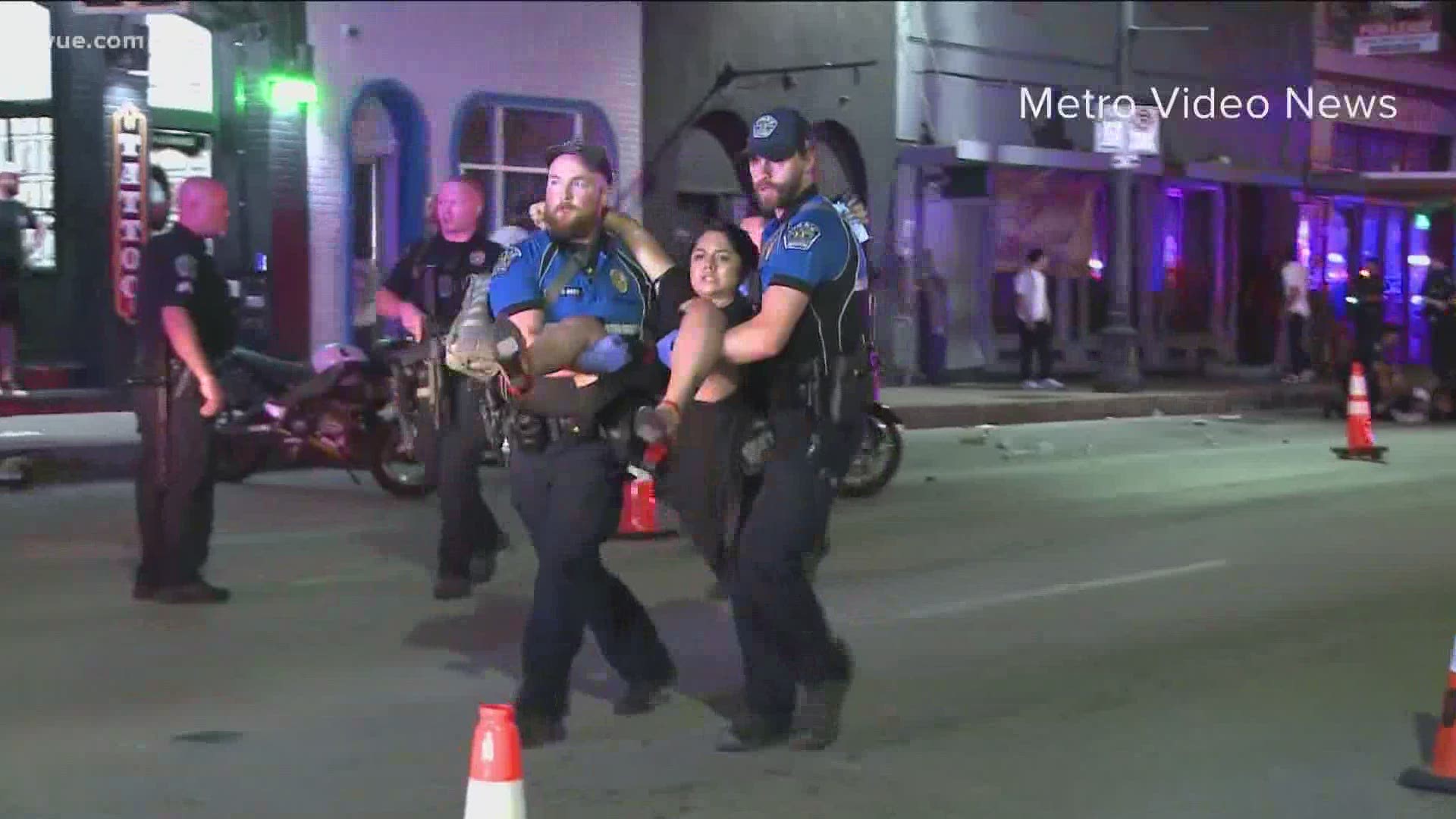 AUSTIN, Texas — Editor’s note: Days after the mass shooting, the Austin Police Department identified a suspect who had been charged in connection to the shooting. The Travis County district attorney and APD later dropped all charges against that person. KVUE has removed that person’s mugshot and name from all web stories.

Adrianna Salazar, 19, was celebrating her 19th birthday in Downtown Austin at an 18+ club on Saturday when things turned dangerous on Sixth Street as gunshots hit 15 victims. Salazar was shot in both legs and is still in the hospital recovering from her extensive injuries.

"I don't really wish this upon anyone, including myself or my family, but I'm hanging in there trying to stay strong," said Adrianna Salazar. "We just really need help with the medical expenses. Anything really helps – any little thing."

A powerful photo of officers carrying her to safety moments after the shooting has made the rounds on social media.

Her family said a bullet went through her right leg and into her left leg, where it is still stuck as of Tuesday. The Salazar family said she is re-learning to walk and is going through intense therapy to help her walk on her own.

In the past few days, two suspects were arrested in connection with the shooting that injured 13 and killed one early Saturday morning in Downtown Austin. One of the suspects is a juvenile, so his identity hasn't been released.

"I'm mad in the sense that she shouldn't have to pay all this out-of-pocket when she was a victim of a crime for somebody else's senseless act," said her brother, Adrian Salazar. "Physically, she'll get better, but mentally, there's the mental challenges that everybody really faces with stuff like that."

Adrian Salazar said he was there the night of the shooting and was struggling to get to his sister when he found out she was shot.

"It's devastating because you feel helpless in a sense because you want to hold her hand," he said when he described what it felt like as Austin police officers held him back from his sister.

"She was yelling because it was painful," said Adrian Salazar. "I would immediately trade positions for her immediately, especially my little sister. Like, that is the last thing that I wanted to happen on that night while we were celebrating her birthday."

Right now, the Salazar family is asking for donations to help pay for medical bills because Adrianna Salazar doesn't have medical insurance. They started a GoFundMe to help relieve the financial burden.

"Right now, we're just struggling with paying the hospital bills because we're going to be paying all out-of-pocket, which also goes back to it being so hard to get health insurance, for not only myself, but everybody in Texas," said Adrian Salazar.

"I hate to see myself like this and to see my family and friends hurting as well along the side of me ... there’s not a day that goes by that I don’t relive the tragic moment ... sad to say I was just trying to celebrate my birthday when this happened to me. I didn’t deserve this and neither did 14 other innocent people. I’m in the process of recovering and healing in the hospital and trying my best to stay strong for myself and my family. anything helps and I very much appreciate it."