How Austin Energy is struggling with statewide outage rollout

ERCOT has declared the highest energy emergency level for Texas, with phased outage rollouts in place across the state. 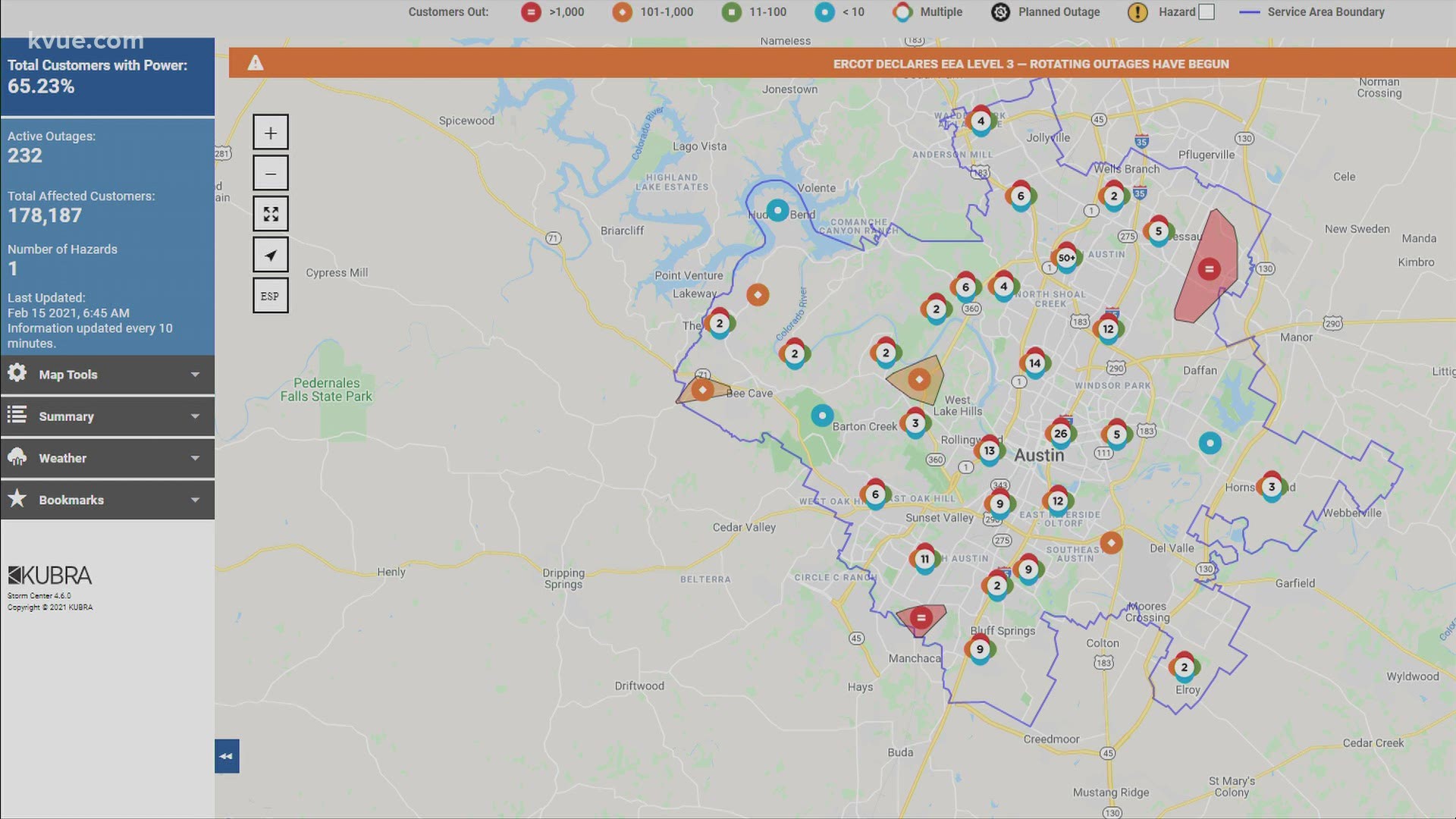 AUSTIN, Texas — The Electric Reliability Council of Texas (ERCOT), the agency that oversees the Texas electric grid, has declared the state at its highest energy emergency level, beginning rolling outages across the state.

The emergency declaration is due to lower power supply and high demand from the extremely low temperatures hitting the entire state.

Rotating outages started at 1:25 a.m. Monday and could remain in place through Tuesday, ERCOT officials said.

Residents were initially told to expect to lose power for 15 to 45 minutes. However, in Austin, some residents have gone without power for more than 10 hours.

As of Tuesday, Feb. 16, more than 180,000 people are without power. Austin Energy said the state is still not allowing it to restore power to 42% of the city because of “grid stability concerns.” It is 8 degrees in the City of Austin and 1 degree in the northern suburbs.

ERCOT reported that some generators tripped offline because of intense temperatures, and that providers "are having trouble" doing appropriate "rolling" blackouts.

Austin Energy explained its issues, in part, in a tweet thread Monday morning:

"Austin Energy has shed load on all available circuits that do not include critical load. This has impacted our ability to rotate outages among customers. Electric load must be reduced in order to fully restore service across the ERCOT grid," Austin Energy said.

The energy provider also explained how it phases its rollouts.

"Austin Energy regularly updates its list of critical loads (such as hospitals) not subject to outage," it said. "For all other areas subject to rotating outages, our system randomly selects which areas go on outage to meet ERCOT’s directives. Typical events allow short durations of each outage, but outages are longer if the ERCOT grid requires – which is what we're seeing in [Monday's] event."

The amount of time a customer will not have electricity during an ERCOT emergency depends on the circumstances of the event, Austin Energy said.

"To serve critical loads and protect the overall reliability of the grid, customers experiencing an ERCOT-directed outage will remain out until conditions improve. Conservation is critical during this time," a spokesperson said. "ERCOT advises that businesses should minimize the use of electric lighting and electricity-consuming equipment as much as possible, and large consumers of electricity should consider shutting down or reducing non-essential production processes."

Residential customers can also help conserve power by setting thermostats to 68 degrees or lower, by turn off lights that are not needed and by unplugging all items that are not in use.