Boil water notices are being lifted, but thousands still do not have water 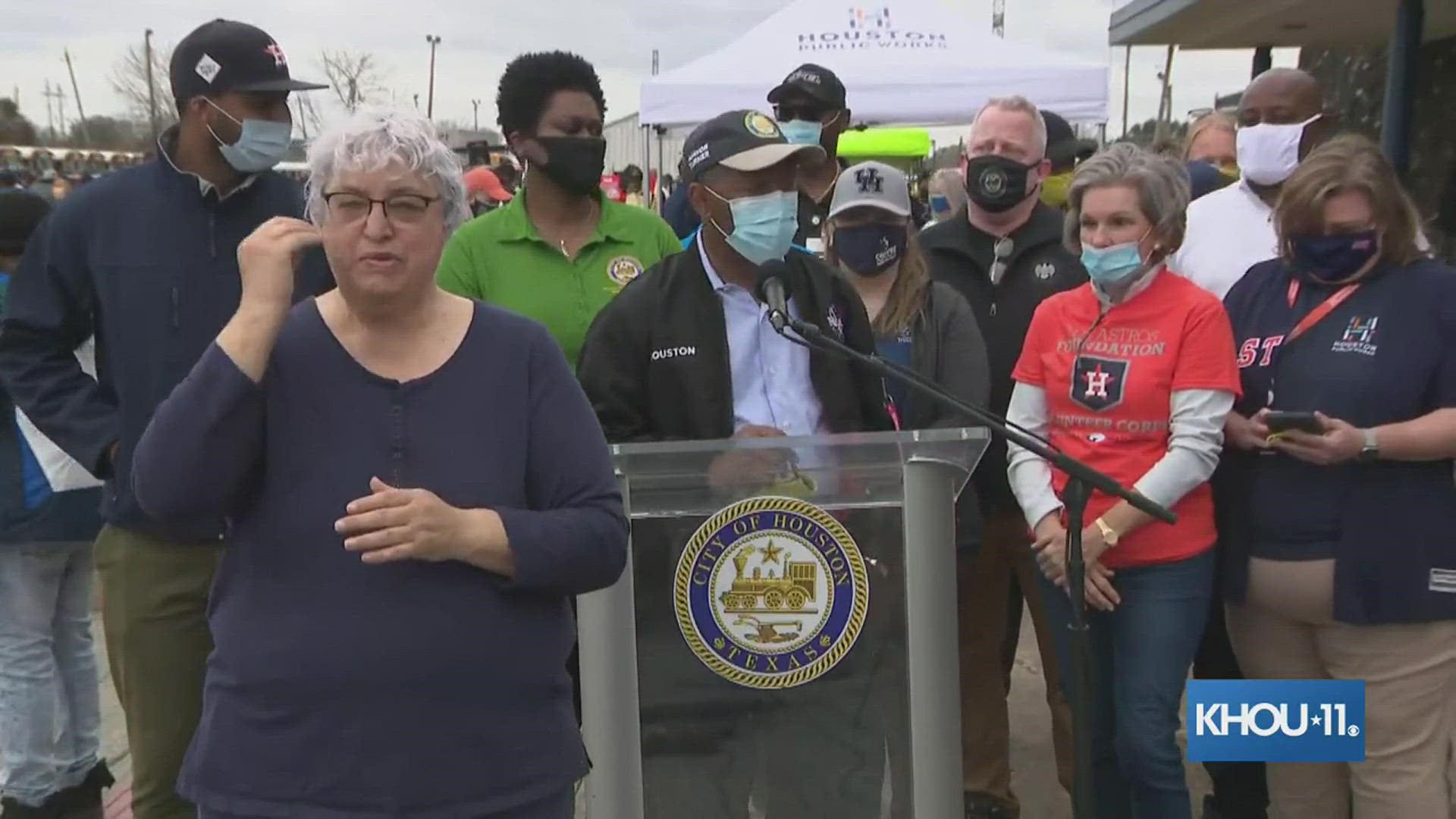 HOUSTON — The city of Houston lifted its boil water notice Sunday, but tens of thousands across the region remain without water due to winter storm damage or pipeline restrictions.

Mayor Sylvester Turner confirmed the notice had been rescinded during a drive-thru water distribution event at Butler Stadium, where more than 18,000 units of water were handed out. It had been in effect since Wednesday.

Turner added officials were planning to lift the notice Monday, or possibly Tuesday, but the situation was contained and the water system stabilized sooner than expected.

A representative with the Astros Foundation, which organized the event, said the units include both bottled and gallon water. It's enough to help at least 4,000 households, she said.

AlertHouston: Effective immediately, Houston has lifted the boil water notice that has been in place since Wednesday, Feb 17, 2021. Customers no longer need to boil water used for drinking, cooking and making ice. https://t.co/Q3HL0meE90

Although the announcement was met with applause, Turner reminded everyone that many in the area are still in dire need. The line for water at Butler Stadium is said to have stretched for nearly 2 miles.

Turner said the city plans to double its efforts in the upcoming weeks to help Houston residents as the recovery phase continues, especially for households with limited emergency funds or little-to-zero disposable income.

"I just want people to know, even though the power has been restored and the water pressure has been normalized, that we're not stepping away from them until their situations are addressed wherever they may be in our city," Turner said.

Earlier Saturday, the city of Galveston, Bellaire, Katy and several other key areas announced their boil water notices had been lifted as well. However, many water districts across the region are still struggling.

Our city’s third food, #COVID19 masks, and water distribution in partnership with @astros foundation at Butler Stadium is underway.

Many making their way to receive essential items. #houwx pic.twitter.com/N4bHSMKHPA

"You've all have been very patient, but we're still not out of the crisis yet," Turner said.

Turner couldn't give an official number, but he deducted that the number of people in the region with out water — whether due to storm damage or pipeline restrictions — remains in the "tens of thousands."

Police Chief Art Acevedo also spoke at the distribution event, reminding those seeking help with damage or other resources to be cautions of scammers looking to take advantage vulnerable residents. He reminded everyone to never give out sensitive information, such as your social security.

"We've been getting a lot of reports of fakes and crooks that are coming around saying that they're here to help you with your pluming or whatever your needs are," Acevedo said. "Please make sure you know who you're dealing with."

Acevedo said the Houston Police Department has been able to slowly demobilize as city operations return to normal.

Now that it's lifted

The boil water notice has been lifted for Houston, it's important to flush your water lines to prevent potential damage or consumption of contaminated water.

Do I need to flush my water lines?

The answer is yes if:

How do I flush my water lines?

Do I need to empty my hot water heater?

No, that is not necessary.