Officer Anthony Dia was killed in the line of duty Saturday at the Home Depot parking lot in west Toledo. 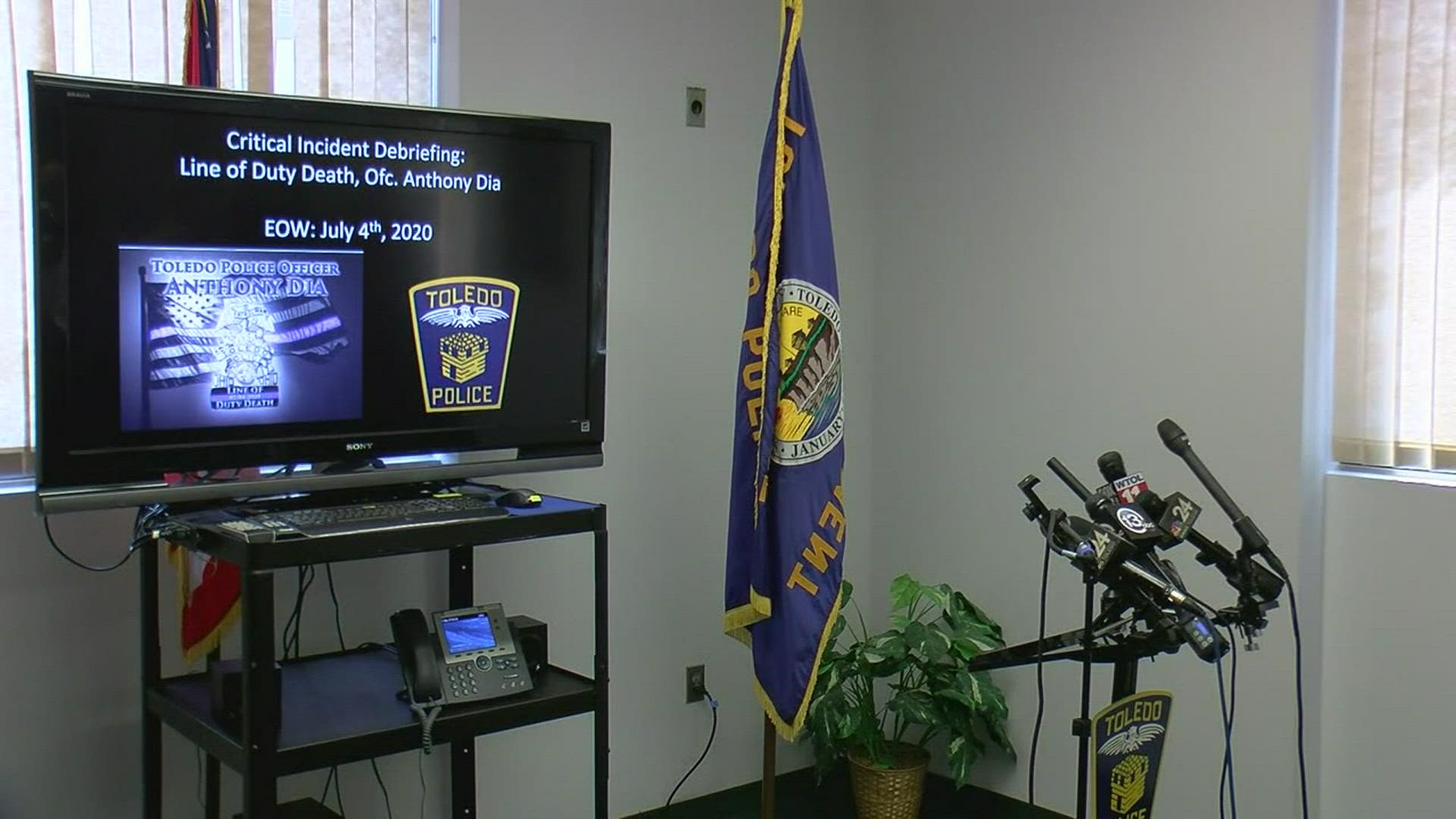 Chief George Kral on Monday described the events that immediately preceded the killing of Toledo Police Officer Anthony Dia, 26, in the parking lot of a Home Depot store on July 4.

The chief was joined on Monday by Dia's father, Younes "Tony" Dia, and Dia's stepmother.

Dia's father thanked the public and the department for the outpouring of support the family has received in the days since his son's death. He also had terse words for anyone who entertains the notion of "defunding" police forces, saying it's "stupid."

"Let the policing be done by those that know what they're doing. ... Let's not tie their hands with politics because we're worried about votes," he said.

He called for politics to stay out of policing, saying that Toledo Mayor Wade Kapszukiewicz and city council members "with all due respect, know nothing about policing."

Dia also said that his son died a hero, doing what he was sworn to do and loved to do.

Kral outlined the events before the fatal shooting, saying that Officer Dia did everything "perfectly" that night, was wearing his body armor and called the fatal shot that was fired by 57-year-old Edward Henry, a white man with a history of intoxication, intimidation and assault charges, "dumb luck." There was no indication the shooter intended a suicide by law enforcement situation that night, Kral said.

"Presumably this was just a drunk guy walking around and as (Younes Dia) said here, (Officer Dia) was just trying to help the guy out, make sure he didn't hurt himself or others and just get him home in one piece," Kral said.

The shooter had some warrants out for his arrest, Kral said, but he was not a habitual, known offender.

Officer Dia was a solo patrol, as is a normal practice in that area of the city, Kral said, but solo patrols now will be suspended for a time being.

Kral encourages a huge turnout by members of the public Tuesday along Dia's funeral procession.

"I would love to see the entire processional route out there with people waving American flags, saluting and paying their respects to this man. He died protecting Toledo. And he deserves this," Kral said.

Toledo Police say they will give an update about fallen Officer Anthony Dia's death on Monday at 2 p.m.

Police Chief George Kral will give a summary and details of the incident that led to Officer Dia's death.

Dia was the first officer on the scene of the Home Depot parking lot in west Toledo, where an intoxicated man was causing a disturbance.

Witnesses told police, as the man was the walking away from the officer, he turned and fired a round from a handgun, according to Toledo Police Chief George Kral.

Dia was hit in the chest and transported to Toledo Hospital, where he passed away.

The man suspected of shooting Dia was found dead in a wooded area near the scene.

Over the weekend, scores of people showed their respect and sent their condolences to the Dia family. Many left flowers, flags, and other tokens at two makeshift memorials in Dia's honor.

A memorial service for Officer Anthony Dia will take place at John F. Savage Arena at the University of Toledo on Tuesday at 10 a.m., according to the Imam Ali Mosque and Toledo Police.

On Sunday night, Toledo Police announced on social media that the Dia family has decided that the service will be limited to the Dia family, their faith-based community, police officers and fire personnel.

WTOL 11 is planning to broadcast the services on air and online on our news app and Facebook page on Tuesday morning. 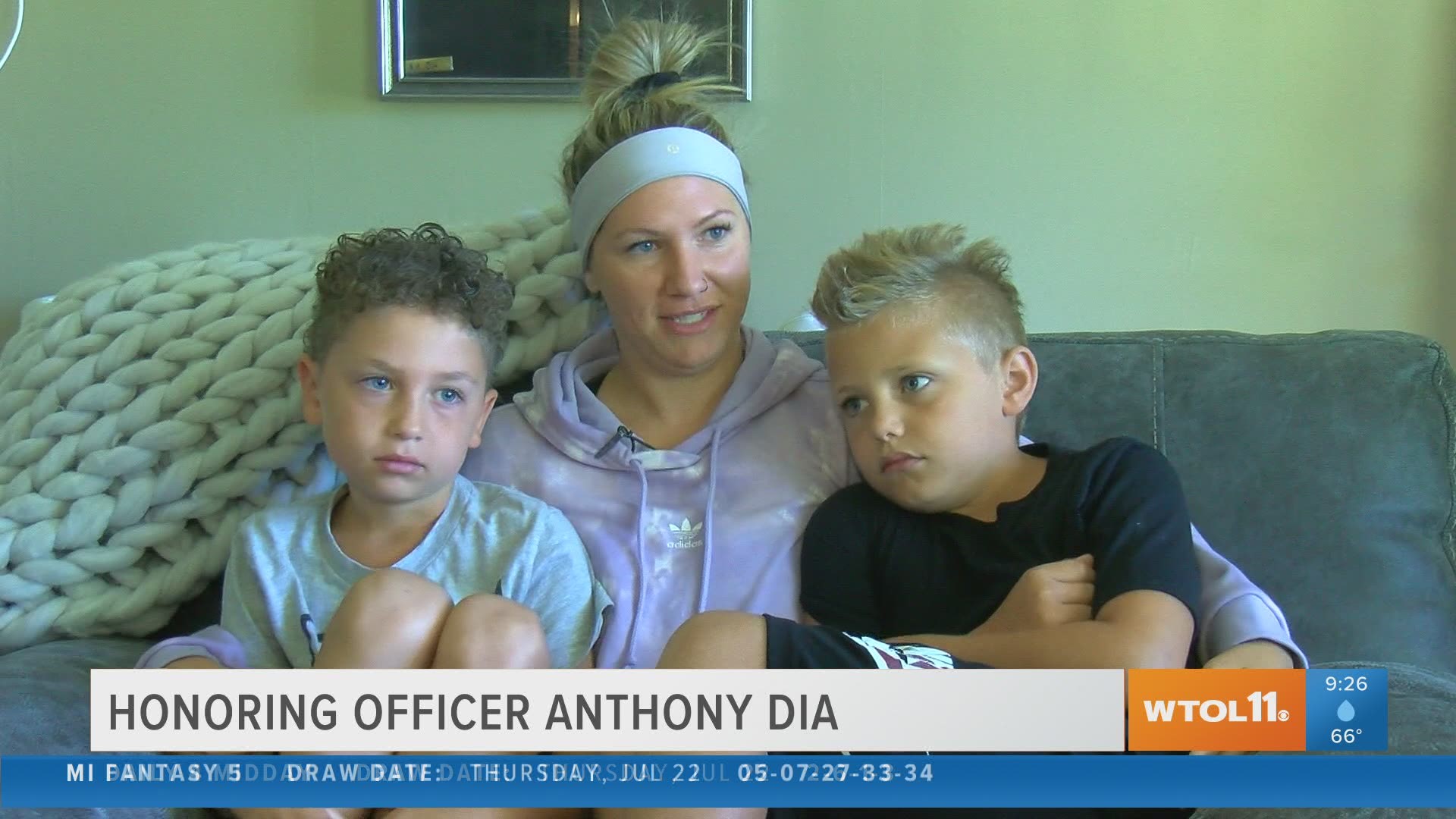 Honoring Officer Dia: Jayme Dia talks about what life is like now without her husband and best friend