Dr. Andrew Baker testified that due to George Floyd's heart conditions, restraint by Derek Chauvin and other officers was "more than Mr. Floyd could take." 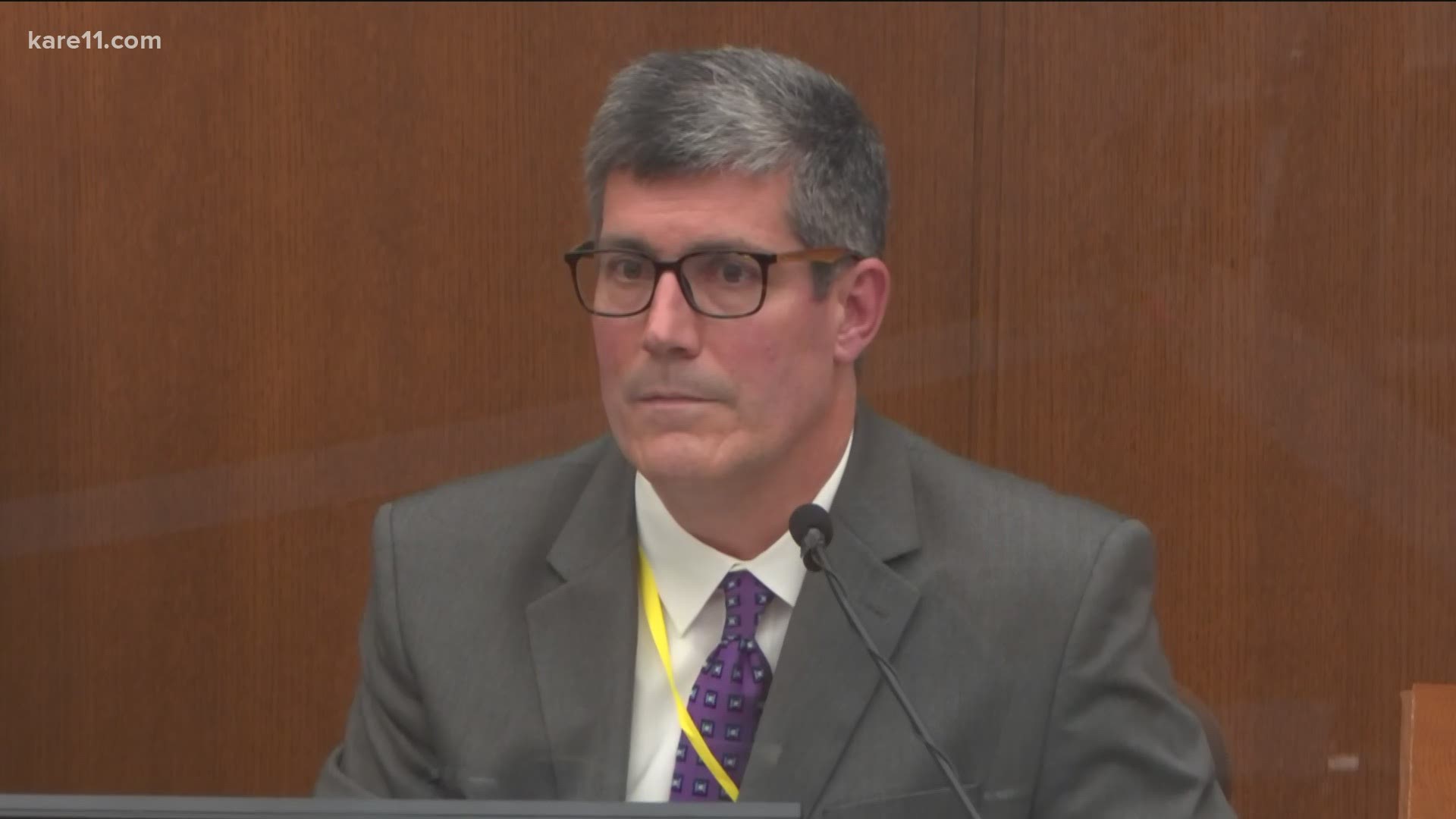 MINNEAPOLIS — The medical examiner who conducted George Floyd's autopsy testified Friday that a restraint by former Minneapolis officer Derek Chauvin and other officers tipped Floyd "over the edge" due to his underlying health conditions, and that heart disease and drugs played a role in his death.

Chief Hennepin County Medical Examiner Dr. Andrew Baker, who experts consider to be one of the most critical witnesses in Chauvin's murder trial, explained the cause of death he listed for Floyd after the former officer pinned the 46-year-old Black man with his knee for more than nine minutes.

He told the jury that Floyd had an enlarged heart that already needed more oxygen, and was limited by partially blocked arteries.

"In my opinion, the law enforcement subdual, restraint and neck compression was just more than Mr. Floyd could take by virtue of those heart conditions," Baker said. In another statement, he said the restraint "tipped him over the edge."

Baker said the top-line cause of death is the "most important thing that precipitated the death." Fentanyl was listed in the "other contributing conditions" section. Baker said that indicates they "played a role in the death but didn't directly cause the death."

Upon cross-examination by Chauvin's defense attorney, Baker elaborated that he believes heart disease, hypertension and drugs in Floyd's system "played a role" in his death.

A key part of defense attorney Eric Nelson's strategy is to convince the jury that other factors, such as pre-existing medical conditions and the presence of fentanyl and meth in his system, caused Floyd's death.

Baker also told Nelson that high blood pressure is the most common cause of an enlarged heart, which Baker testified he observed in Floyd. Baker said that's consistent with Floyd's medical history.

Baker testified that he didn't watch the widespread video of Chauvin pinning Floyd under his knee because he didn't want to go in with "preconceived notions" about what happened.

"That might tempt you to skip certain steps or not do something that could turn out to be relevant," he said.

Nelson also pressed Baker about his past conversations with Hennepin County prosecutors about Floyd's toxicology report. The defense attorney asked Baker if he recalled describing the level of fentanyl in Floyd's system as "fatal."

He said that he remembers saying that "in other circumstances, it would be a fatal level."

Baker added that he believes he said something like, "Had Mr. Floyd been home alone in his locked residence with no evidence of trauma, and the only autopsy finding was that fentanyl level, then yes, I would certify his death as due to fentanyl toxicity."

He also told Nelson that he clarified his opinion of Floyd's cause of death to federal officials, including the FBI.

"That is, he experienced a cardiopulmonary arrest in the context of law enforcement subdual, restraint and neck compression," Baker said. "It was the stress of that interaction that tipped him over the edge, given his underlying heart disease and his toxicological status."

Upon redirect, Prosecutor Jerry Blackwell asked Baker to return to the topic of Floyd's cause of death.

"My opinion remains unchanged, it's what I put on the death certificate last June," Baker said.

Baker's testimony came in what Attorney Doug Kelley, who's serving as a trial expert for KARE 11, said could be the "most important day of the trial."

The trial will resume Monday, and the state is expected to call a medical doctor. Kelley said he expects the prosecution to rest its case Monday.