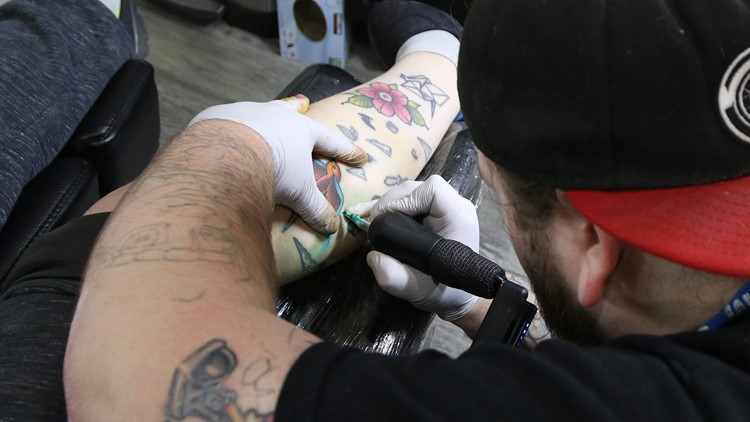 Photo by: Photo by Diane Woodring/WTOL
Kodi Klo works on a traditional swallow with a colorful twist on Friday the 13th at Toledo Tattoo Company

TOLEDO, Ohio — Friday is a holiday that happily happens more than once a year for tattoo fans - Friday the 13th. For the average person, it's known as a day of bad luck. But for those looking to get new ink, it's a day of good deals.

Friday the 13th is a tradition in the tattoo community for a chance to get tattoos honoring the occasion. With the number 13 often symbolizing bad luck, it's considered good luck to get a tattoo including the number, and Friday the 13th is the perfect time to do so. The legend goes that sailors would often get the number 13 tattooed so that bad luck would see the mark and pass on by them.

In the present, many shops have branched out their offerings beyond the traditional tattoos including the number 13 theme. Several shops in Toledo offered specials Friday.

One shop, Toledo Tattoo Company, offered around 300 designs from the five different in-house artists working that day. The themes varied from the traditional 13 and other classic designs to modern pop culture pieces. Prices were $31 for basic black linework and $80 for linework and color. On average, the base cost for tattoos could range to more than double the Friday the 13th deal price.

Swallows are a popular tattoo motif. Kodi Klo applies a stencil at Toledo Tattoo Company on Friday the 13th.
Photo by Diane Woodring/WTOL

The last Friday the 13th special attracted 57 customers to Toledo Tattoo Company. Established in Point Place in 1978, Toledo Tattoo Company is the longest running tattoo shop in the area. Christmas music from a local radio station plays over the sound system. It's quiet, thanks to new, modern, battery operated tattoo guns. On the side of the building is a large colorful mural done by the owner. It's hard to miss when driving down North Summit.

Owner Kodi Klo inherited the shop from his father two years ago. His father, Billy Gunn, purchased it from the original owner 16 years ago. Kodi has been in the business himself for a decade, beginning as an apprentice under his dad while still in high school.

Tattooing is, literally, in Kodi's blood.

Kodi Klo chooses ink to begin a tattoo on Friday the 13th.
Photo by Diane Woodring/WTOL

For Kodi, giving back to loyal customers and attracting new clients is one of the biggest reasons to participate in Friday the 13th specials. Keeping up a tradition is another big reason, even though that tradition has evolved over the years. The change from the traditional 13s and scary designs broadens the appeal to clients and offers a change of pace for the artists.

"It's fun for us," said Kodi. "It gives us variety and gets a lot more people involved."

Kodi explained it was a good chance for first timers to get quality work at a steep discount as well. The old adage that "a good tattoo isn't cheap and a cheap tattoo isn't good" doesn't apply here on Friday the 13th.

Toledo Tattoo Company is located at 4747 North Summit Street and plans on continuing the Friday the 13th tradition in March.

RELATED: 'The tattoos I do are not meant for everyone to see' | Artist tattoos nipples onto breast cancer survivors