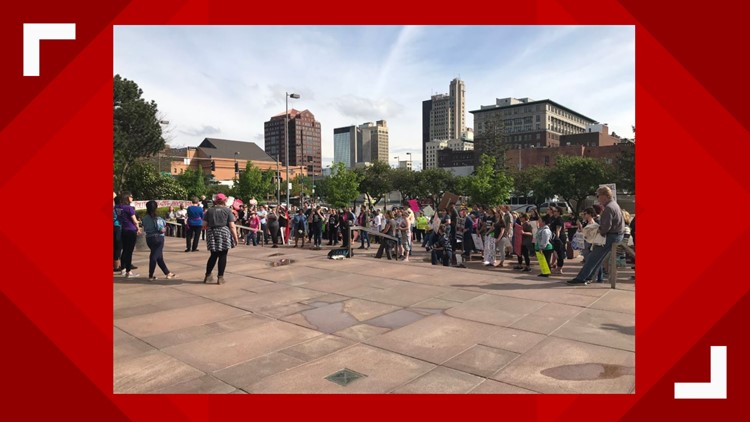 Dozens protest in Downtown Toledo to 'Stop the Ban'

TOLEDO, Ohio — Dozens of people lined the block outside One Government Center Wednesday to protest restricted access to abortion. They said they are fed up, they want change and they want to be heard.

For Schuyler Beckwith, it's an issue she deals with daily, working at the only abortion clinic left in Northwest Ohio, and since the heartbeat bill was signed, more uncertainty looms.

"I do, and I think the staff that work at capital care believe deeply in what we do and we're s proud to continue to provide this care and it's hard going into work everyday not knowing if you're going to be open," Beckwith said.

For Peter Range who helps organize anti-abortion protests outside the clinic, he believes Governor Mike DeWine signing the heartbeat bill, which would restrict abortions after about 6 weeks of pregnancy is a good sign. He also doesn't believe in abortion, even in cases of rape and incest.

"I even have personal friends who are products of that horrible situation and they are just simply happy to be alive. We know that can sometimes be the only good thing that comes out of that situation," Range said.

Kylee Gregg had an illegal abortion at 11 because she was being sex trafficked. She disagrees with Range, especially after hearing about an 11-year-old in a similar situation.

"I mean, I'm so angry for her, so upset, just so hurt, i think women, we should always have a right to our body no matter our age no matter our circumstance, no matter anything," Gregg said.