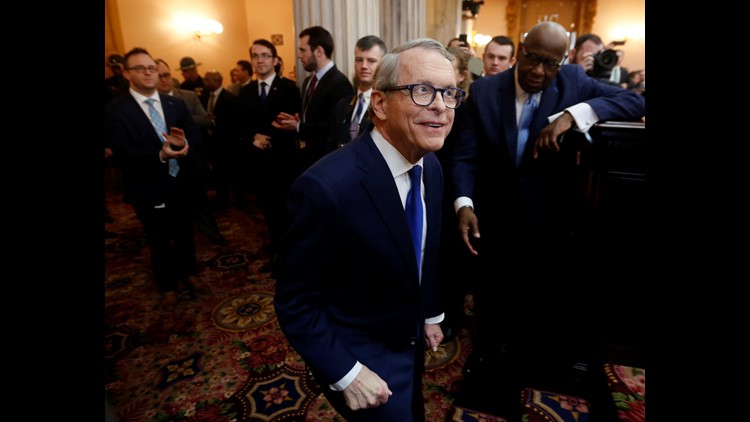 Republican Gov. Mike DeWine followed through on his pledge to sign the heartbeat bill. The bill cleared the state Legislature on Wednesday.

DeWine’s signature makes Ohio the sixth state to vote to ban abortions after the first detectable fetal heartbeat, which can come as early as five or six weeks into pregnancy, before many women know they’re pregnant.

Courts blocked heartbeat laws in two other states and a third is awaiting governor's action.

DeWine’s support for the bill breaks with his predecessor. Former Gov. John Kasich, a fellow Republican, twice vetoed it on grounds it was unconstitutional and would spark a costly court challenge.

Opponents have vowed to sue.

State Rep. Michele Lepore-Hagan, a Democrat from a storied Youngstown political family, shed tears during earlier debate, exasperated at a bill she said would harm Ohio and its future.

Opponents' protests did nothing to budge a largely closed-mouthed GOP majority on the committee. They appeared confident that prohibiting pregnancy termination once a fetal heartbeat is detected is the best thing for the unborn, for women and for the state. Republicans dominated an 11-7 party-line vote that sent the bill to the full House, where it's scheduled for a vote Wednesday.

Keller rejected suggestions that everyone knows someone who has had, or will need, an abortion; that women will continue to have abortions, only unsafely; even that reproductive rights are about women rather than the men who impregnate them and the male doctors who abort those pregnancies.

The House's 56-39 vote sent the bill to the Ohio Senate, which agreed to House changes 18-13 before sending the bill to DeWine, a Republican who took office in January.

The earliest bans on heartbeat abortion, in Iowa and North Dakota, have been blocked by the courts. Three more states — Mississippi, Kentucky and Georgia — have more recently passed bills amid growing national momentum. The Georgia bill has not yet been signed by the governor.