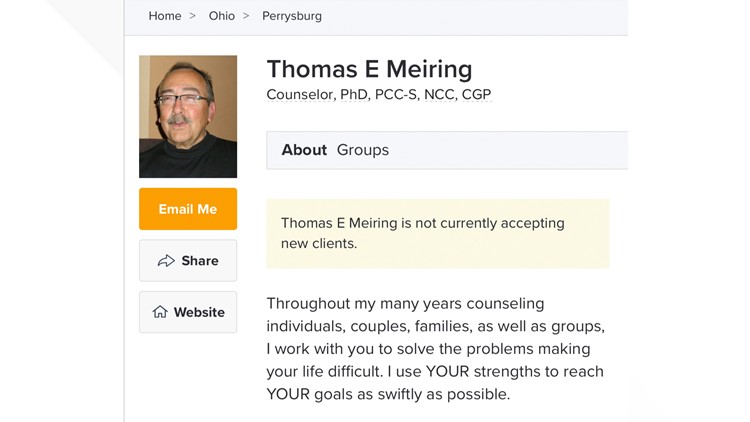 Photo by: AP
This Oct. 1, 2019 image made from an online list of therapists shows an entry for Thomas Meiring. The former priest maintained his state-issued license as a clinical counselor in Ohio even after the diocese in Toledo settled a lawsuit in 2008 filed by a man who said he was 15 when Meiring sexually abused him in a church rectory in the late 1960s. (AP Photo)

AP investigation shows defrocked Toledo priest as one of many who live under the radar, still influencing children as a counselor

TOLEDO, Ohio — A large-scale investigation by the Associated Press reveals nearly 1,700 priests and other clergy members credibly accused of child sexual abuse continue to live under the radar with little or no oversight from church authorities or law enforcement.

The investigation identifies one such priest who was defrocked in 2016 by the Toledo diocese after claims of child sex abuse.

According to the investigation, Thomas Meiring still is a therapy treatment provider for teens and adults with sexual orientation and gender identity issues. The AP said Meiring began working as a licensed clinical counselor in Ohio, after asking to leave the priesthood in 1983.

He maintained his state-issued license even after the diocese in Toledo settled a lawsuit in 2008 filed by a man who said he was 15 when Meiring sexually abused him in a church rectory in the late 1960s.

The diocese's request to defrock Meiring was granted in 2016. State records show that Ohio's Counselor, Social Worker and Marriage & Family Therapist Board has never taken disciplinary action against the 81-year-old, who previously was listed as a treatment provider listed by Perrysburg Municipal Court. Court Administrator Scott Howard said that Meiring and InnerVIew Behavioral Care were discontinued as a treatment provider choice at least a year ago. No specific reason was cited for Meiring being dropped from the list.

Claudia Vercellotti, leader of Toledo's chapter of the Survivors Network of those Abused by Priests, said her organization has tried for years to call attention to Meiring and his continued contact with children.

"We made noise about him years ago and nobody did anything. It's mind-blowing," said Vercellotti told the AP.

A statement from SNAP in response to the AP investigation was released Friday. In it, SNAP said, "Catholic officials must warn the public about [Meiring] immediately, using parish bulletins, church websites and pulpit announcements. And lawmakers must plug the loophole that makes this kind of dangerous situation possible. ... We beg Ohio legislators to remedy this flaw as soon as possible."

When asked why Meiring would still be able to serve in his counselor role in the face of the allegations and being defrocked, the state licensing board director said without a conviction, the board has no authority to act.

Multiple calls by the AP to Meiring at his home and office were not returned.

Few state licensing boards for professions like counselors or teachers have mechanisms in their background check procedures that would catch allegations that were never prosecuted. Some standard checks are conducted in every state, but the statutes regulating what can be taken into consideration when granting or revoking licenses vary. And because the lists of priests with credible allegations against them were so thin until the past year, there was little to cross-check.

The AP review found that 190 of the former clergy members gained licenses to work as educators, counselors, social workers or medical personnel, which can be easy places to land for priests already trained in counseling parishioners or working with youth groups. State credentialing boards often were powerless to deny them or unaware of the allegations until the dioceses' lists were released.

In addition to the almost 1,700 that the AP was able to identify as largely unsupervised, there were 76 people who could not be located. The remaining clergy members were found to be under some kind of supervision, with some in prison or overseen by church programs.

The review found hundreds of priests held positions of trust, many with access to children. More than 160 continued working or volunteering in churches, including dozens in Catholic dioceses overseas and some in other denominations. Roughly 190 obtained professional licenses to work in education, medicine, social work and counseling — including 76 who, as of August, still had valid credentials in those fields.